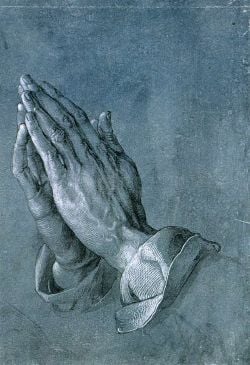 Faith in something greater is an important theme in all the world religions. Painting by Albrecht Dürer.

Faith (from Greek-pistis and Latin-fides) refers to confidence, trust, and hope in God, a person, community, tradition, or locus of inspiration. The object of faith varies among people, but the common denominator is a level of conviction and an inner attitude towards a greater power or force in the universe. Etymologically, the word 'faith' is closely linked to the concept of "fidelity," which emphasizes commitment to something or someone. Faith can thus be envisioned as a trust in providence, and has been used as a synonym for religion, such as in the Buddhist faith or the Christian faith.

In a lesser sense, faith is often understood to mean 'loyalty' to a particular view of divinity, allegiance to a particular religious community and belief in its doctrines. Yet all religious traditions regard mere "belief"—intellectual assent—as faith of the weakest kind.

Faith is an important aspect of the world religions, and a common theme of human religiosity. According to Christian tradition, faith is one of the gifts of the Holy Spirit that provides impetus for humanity to move forward, and is said to be especially important when one encounters obstacles in life. Living a life of faith helps one transcend a limited view of self and live for the sake of the larger human community and the purposes of God. For many people, faith, or the lack thereof, is an important part of their overall identity.

The concept of faith is central to many religious traditions; yet, the term's usage is somewhat problematic due to it's elastic nature. For example, the word faith can be used in a variety of ways according to one's intention, perspective, and theological context. Protestant Christians, for instance, speak of the doctrine of Justification by Faith, which has a specific meaning within Protestant discourse (see below).

Generally speaking, faith has both an individual and a communal dimension: Personal faith is an individual's confidence, trust, and hope in something or someone greater, whereas Communal faith is a shared group commitment to similar ideals. Communities of faith can be of various kinds ranging from family and kinship groups, ethnic groups, religions, philosophical communities, political parties, or even scientific schools.

Moreover, the terms "faith" and "belief" are often used as synonyms albeit scholars such as Wilfred Cantwell Smith (1998) have nuanced the respective meanings of these terms. Typically, a "belief" implies an intellectual or mental assent to a proposition, whereas "faith" is a deeper holistic commitment of one's entire being to a higher calling, which resonates and permeates one's entire life. Thus, faith often includes an act of the will and an emotional commitment beyond the intellect, whereas beliefs are rooted in intellectual commitments and convictions.

Modern writers and skeptics often speak of blind faith in a pejorative manner. Critics describe faith as an "irrational practice" and argue that one should only accept what is directly supportable by logic or evidence. To have faith in a God or power without any reasons to support it is called fideism. Faith in the sense of being grounded simply in the sincerity of faith, has thus been ridiculed as "blind faith." However, faith need not be blind or submissive: both the Hebrew Bible and the Talmud, for example, depict a committed but contentious faithful relationship between the Jews and their God.

In Biblical Judaism, faith is specifically understood as the continued obedience of the Jews to the commandments of God (Jehovah) found and repeatedly renewed in his Covenants. Thus, faith is tied to the context of God's Covenant with his chosen people, Israel. In practice, this means that Jews are expected to be faithful to God by following the 613 Mitzvoth, and honoring the holidays of the Jewish calendar, among other practices.

The classic definition of "Faith" in Christianity is summed up in what many consider to be the greatest chapter on faith in the New Testament found in Hebrews 11:1:

"Now faith is the assurance of things hoped for, and the conviction of things not seen."

While the precise meaning and content of faith in Christianity differs in some respects between the various Christian traditions, there is much common ground. In general, Christian faith is seen as 'hope in action' which tangibly manifests itself in the conviction that Christ is the Savior and Messiah of all humankind. Faith in this conviction is central to salvation in Christian theology. However, such faith is a gift of God (1 Corinthians 12:8-9), and Paul lists it along with hope and love as the gifts of the Holy Spirit. Interestingly, Paul states that love is "the greatest" gift but faith is the ground of all else.

In Protestant theology, the concept of Justification by Faith is an important doctrine of various Protestant denominations. Martin Luther, the founder of the Lutheran Church, for example, states that faith alone (sola fide) is necessary for salvation. According to him, faith was not a mere "intellectual assent" to Church doctrines because this did not actually touch one's heart. In fact, he would consider this to be what Paul calls the "faith of demons" which merely acknowledges the existence of God. Luther wrote, "Faith is a living, bold trust in God's grace, so certain of God's favor that it would risk death a thousand times trusting in it."[1]

Luther argued that no amount of good works could ever compensate for a lack of faith. By deeming works necessary we deem Christ imperfect (see Romans 3:22-25). No sacrament or any church ritual is at all relevant in this matter; full justification takes place at the moment a sinner admits sin and trusts in the sacrifice of Christ who took the punishment for that sin. Sanctification is what follows as a result of gratitude for justification already completed. However, critics often point out that Luther's position is undermined by the Epistle of James, which states that people are "not justified by faith alone" (James 2:24).

In both the Theravada and Mahayana traditions of Buddhism, faith is known as saddha / sraddha and is an important aspect of the teachings of Buddha. Sraddha means provisional adherence to the doctrine of Buddha (dharma) until personal experience and practice convinces one of the truth. Although Buddha insisted that his disciples experience truth for themselves, once one embarked on the Buddhist Eightfold Path the process nevertheless required a degree of trusting confidence primarily in the spiritual attainment and salvational knowledge of Buddha. Faith in Buddhism centers on belief in Buddha as a supremely Awakened being, in the truth of his Dharma (spiritual doctrine), and in his Sangha (community of spiritually developed followers).

As Buddhism evolved and spread throughout Asia, the act of faith became very important in various forms of Mahayana Buddhism, which very much emphasized the importance of faith. For example, the Pure Land school of Mahayana Buddhism encouraged its practitioners to place ultimate faith the efficacy of the saving grace of Amitabha Buddha. Others placed faith the merit of various bodhisattva figures. Thus, faith to some degree helps propel the Buddhist practitioner towards the goal of Awakening (bodhi) and Nirvana or rebirth in higher celestial realms.

The Arabic word for "Faith" is Iman (Arabic: إيمان). This term literally means “to fully observe one's faith” or “to learn one's faith,” and lexically denotes affirmation and confirmation in the heart. It can be found in a verse of the Holy Qur'an, which proclaims that iman distinguishes a believer from a non-believer: "None can have faith except by the will of [Allah." Qur'an (10:100).

According to Islamic teaching, Iman means acquiescing to a truth of a thing in the heart (heart being the spiritual center). Faith is not mere belief, but firm commitment to knowledge of truth of which we do not doubt.

The word for "Faith" in Chinese characters consist of two characters (信仰); the first one (信), which consists of a pictograph of "a person" (人) and an ideograph of "words or speeches" (言), has a meaning of "trusting" or "believing." The second one (仰) consists of a pictograph of "a person" (人) and a radical with a meaning of "raising one's head and looking up to" (卬). Thus, faith in Chinese character has a connotation of "a human action of trusting in the words of a leader or a teacher in spiritual matters and looking up to him or her or a superhuman being behind him/her (Andrew Wilson's Scope Notes)."

Scientists have faith and beliefs. In this sense they are religious, or sometimes called quasi-religious. For example, many scientists believe in Darwinism, which has been called a "pseudo-religion." They believe that the concept of unguided random mutation and natural selection can explain the development of life on earth. While they can point to reasons why they believe this, they cannot prove it with the scientific method, nor can they disprove those who believe a Creator designed the universe.

Faith in something greater than oneself is a common theme among the world's religions. Faith is manifested both at the level of personal connection to something deeper in life, and at the level of commitment within a community. Whereas "belief" implies an intellectual assent to a proposition, faith is a deeper holistic commitment of one's entire being to a higher calling, which resonates and permeates one's entire life. The role of faith has an essential place in all religions, and has been an important way for humanity to live a fulfilling life.