Carnation is a common name for a herbaceous plant, Dianthus caryophyllus, of the Caryophyllaceae family, widely cultivated for its flowers. The term also is used for the showy, variously colored, often fringe-petaled and fragrant flowers of the cultivated forms of this plant. Both the wild and cultivated plants (and flowers) are known as carnations. However, D. caryophyllus is known in the wild also as wild carnation or clove pink, while the cultivated form is sometimes known as the border carnation (DHA 2005).

Border carnations are among the most popular flowers, whether in gardens or as cut flowers, including in floral arrangements and corsages. The wild carnations also provide a value for the ecosystem, having a mutualistic relationship with various insect pollinators. While this ecological relationship has allowed the plant to survive in its limited native areas around the Mediterranean, the benefit given to humans has led to its widespread cultivation worldwide and the development of numerous cultivars, with variety in flower size, color, petal number, and so forth.

The carnation, Dianthus caryophyllus, is a member of the flowering plant family Caryophyllaceae, commonly called the pink family or the carnation family. This is a large family with 88 genera and some 2,000 species. Most are herbaceous annuals or perennials, dying off above ground each year. The leaves are almost always opposite, rarely whorled. The blades are entire, petiolate, and often stipulate. The hermaphroditic flowers are terminal, blooming singly or in branched or forked in cymes. The flowers are regular and mostly 5-merous, i.e. with 5 petals and 5 sepals, but sometimes with 4 petals. The petals are fringed or deeply cleft at the end.

Within Caryophyllaceae, carnations belong to the Dianthus genus. Dianthus includes about 300 species of mostly perennial herbs, with a few annual or biennial, and some are low subshrubs with woody basal stems. The leaves are opposite, simple, and mostly linear. The flowers have five petals, typically with a frilled margin, and are (in almost all species) pale to dark pink. (One species, D. knappii, has yellow flowers with a purple center.)

The carnation, Dianthus caryophyllus, is a herbaceous plant growing to 60 centimeters tall, or taller in some conditions. In the wild, it is an annual plant, but plant breeders have selected perennial forms. Thus, border carnations, which are cultivars and derivatives of D. caryophyllus, are perennial, with some cut-flower varieties grown for one to three years (DHA 2005). Carnation stems are woody at the base but have herbaceous branches (DHA 2005).

Carnation leaves are glaucous grayish green to blue-green, slender, up to 15 centimeters long. The flowers of D. caryophyllus, the wild forms, are single and have five petals, and are generally white to pink to purple in color (DHA 2005). However, border carnations, the cultivated forms of D. caryophyllus, may have double flowers with as many as 40 petals (DHA 2005). Flowers of the wild carnations are about three to five centimeters diameter, but border carnations grown in gardens are typically six to eight-and-one-half centimeters in diameter and some greenhouse grown plants may have flowers up to ten centimeters in diameter (DHA 2005). Cultivars may be many colors, including red, white, yellow, and green.

The carnation is probably native to the Mediterranean region but its exact range is unknown due to extensive cultivation for the last two millennium. Today, D. caryophyllus is not seen in the wild with the exception of some Mediterranean countries (DHA 2005). In the wild, carnations require insect pollinators, but most commercially important carnation varieties are sterile and are vegetatively propagated (DHA 2005).

Carnations have been cultivated for over 2,000 years (DHA 2005). Clove pink was grown in the Middle Ages for its clove-like perfume. Modern border carnations have been selected for flower size, color, petal number, stem length, and disease resistance (DHA 2005). Some have been genetically modified to produce violet, mauve, or purple colored flowers or to have a long vase life (DHA 2005). 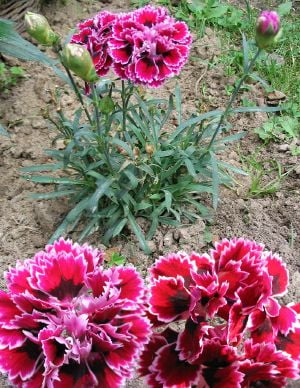 Carnations, while popular in gardens, are particularly well-known (and of commercial importance) as cut flowers. They may be presented as gifts, or worn as corsages or boutonnières on special occasions, such as Mother's Day, weddings, and proms. 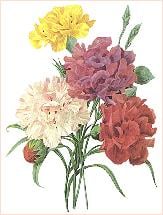 Pink carnations have been given a great deal of symbolic and historical significance. According to a Christian legend, carnations first appeared on Earth as Jesus carried the Cross. The Virgin Mary shed tears at Jesus' plight, and carnations sprang up from where her tears fell. Thus, the pink carnation became the symbol of a mother's undying love, and in 1907 was chosen by Ann Jarvis as the emblem of Mother's Day, now observed in the United States and Canada on the second Sunday in May. A red carnation may be worn if one's mother is alive, and a white one if she has died.

In some cultures, however, especially the French culture, the carnation symbolizes misfortune and bad luck. In ancient Rome, carnations were known as "Jove's Flower" as a tribute to one of their beloved gods.

At Oxford University, carnations are traditionally worn to all examinations; white for the first exam, pink for exams in between, and a red for the last exam.