Les Paul (born Lester William Polsfuss) (June 9, 1915 - August 14, 2009) was an American jazz and country guitarist, one of the key developers of the electric guitar, and a pioneer in the field of recording electronics. As a result of his trend-setting music with the Les Paul Trio and later with the duo of Les Paul and Mary Ford in the 1940s and 50s, Paul influenced a generation of guitarists, especially through his use of overdubbing and other special effects. Paul also pioneered the development of the solid-body electric guitar and thus had a major impact on the evolution of rock and roll. His many recording innovations include overdubbing, delay effects, phasing effects, and multitrack recording. Paul was also instrumental in the development of new recording technologies with the Ampex Corporation.

Paul was one of the first to experiment with improving the sound of electric guitars in the 1940s and later lent his name to the Gibson "Les Paul" model guitar, one of the industry's most popular models. He was the first known artist to use overdubbing, a technique which he invented, and soon launched a successful career with his wife, Mary Ford, featuring this and other new special effects. The couple's hits included "How High the Moon," "Bye Bye Blues," and "Vaya Con Dios."

Paul was born in Waukesha, Wisconsin, to George and Evelyn Polfuss. He later took the stage name of "Les Paul." He also used the nickname "Red Hot Red."

Les first became interested in music at the age of eight, when he began playing the harmonica. After an attempt at learning the banjo, he began to play the guitar. By 13, Paul was performing semi-professionally as a country music guitarist. At the age of 17, Paul played with Rube Tronson's Cowboys. Soon after, he dropped out of high school to join Wolverton's Radio Band in St. Louis, Missouri on station KMOX.

In the 1930s, Paul performed jazz music on Chicago radio. His first two records were released in 1936. One was credited to "Rhubarb Red," Paul's hillbilly alter ego, and the other was as an accompanist for blues artist Georgia White.

In 1938, Paul moved to New York and landed a featured spot with Fred Waring's Pennsylvanians radio show. Paul moved to Hollywood in 1943, where he formed a new trio. As a last-minute replacement for Oscar Moore, Paul played with Nat King Cole and other artists in the inaugural Jazz at the Philharmonic concert in Los Angeles on July 2, 1944. Also that year, Paul's trio appeared on Bing Crosby's radio show. Crosby went on to sponsor Paul's recording experiments.

Crosby and Paul also recorded together several times, including a 1945 number-one hit, "It's Been A Long, Long Time." In addition to backing Crosby and artists like The Andrews Sisters, Paul's trio recorded several albums of their own on the Decca label in the late 1940s. 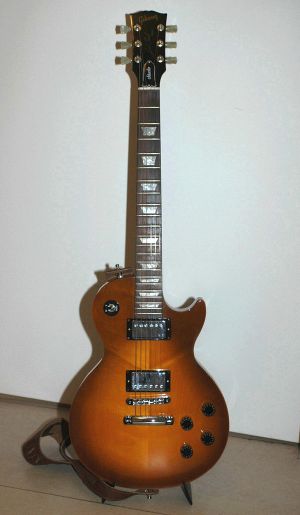 Paul was dissatisfied with the electric guitars that were sold in the mid 1930s, and began experimenting with designs of his own. He thus created "The Log" in 1941, which was simply a length of common 4"-by-4" fence post, to which he added a bridge, guitar neck, and pickup. His innovation solved two main problems: feedback, as the acoustic body no longer resonated with the amplified sound, and lack of sustain, as the energy of the strings was not dissipated in generating sound through the guitar body.

Paul's invention was not the first solid body guitar, as Adolph Rickenbacher had marketed his version of a solid-body instrument in the 1930s. Leo Fender independently created his own solid-body electric guitar around the same time that Paul did.

In the early 1950s, the Gibson Guitar Corporation designed a guitar incorporating Paul's suggestions and presented it to him to try. He was impressed enough to sign a contract for what became the "Les Paul" model and agreed never to play in public or be photographed with anything other than a Gibson guitar. This arrangement persisted until 1961, when Gibson changed the design of the guitar without Paul's knowledge. He reportedly first saw the "new" Gibson "Les Paul" in a music store window, and disliked it. Though his contract required him to pose with the guitar, he said it was not "his" instrument and asked Gibson to remove his name from the headstock. Gibson renamed the guitar the "SG," and it, too, became one of the company's best sellers.

Later, Paul resumed his relationship with Gibson, and continued to endorse the "Less Paul" guitar until the present, although he modifies his personal guitars to suit himself.

Today, the Gibson "Les Paul" guitar is used all over the world, by both novice and professional guitarists, much admired for its ease of play and high level of sustain. Also designed was an Epiphone "Les Paul" model, with the same outer look, but offered at a lower price.

In 1947, Capitol Records released a recording that had begun as an experiment in Paul's garage, entitled "Lover (When You're Near Me)," which featured Paul playing eight different parts on electric guitar, some of them recorded at half-speed, hence "double-fast" when played back at normal speed for the master. This was the first time that multi-tracking had been used in a recording. Paul did not use magnetic tape for his experiments, but wax disks. Paul would record a track onto a disk, then record himself playing another part with the first. Recording parts at slightly different speeds and with delay, Paul generated his signature sound, with diverse echoes and birdsong-like guitar riffs. He later began using magnetic tape, allowing him to take his recording rig on tour with him.

In January 1948, Paul was injured in a near-fatal automobile accident in Oklahoma, which shattered his right arm and elbow. Doctors told Paul that there was no way for them to rebuild his elbow in a way that would let him regain movement, and that his arm would remain in whatever position they placed it in permanently. Paul then instructed the surgeons to set his arm at a 90-degree angle that would allow him to cradle and pick the guitar. It took him a year and a half to recover.

Career with Mary Ford and Ampex

In the early 1950s, Paul made a number of revolutionary recordings with his wife, Mary Ford, who sang. These records were unique for their heavy use of overdubbing. The couple's hits included "How High the Moon," "Bye Bye Blues," "The World Is Waiting for the Sunrise," and "Vaya Con Dios." These songs featured Mary harmonizing with herself, giving the vocals a novel sound.

Bing Crosby soon gave Les Paul what was only the second Ampex Model 200 tape record to be produced, and Paul immediately saw its potential both for special effects, such as echo and flanging, as well as its suitability for improved multitrack recording.

Using this machine, Paul developed his tape multitrack system by adding an additional recording head and extra circuitry, allowing multiple tracks to be recorded separately and asynchronously on the same tape. Paul's invention was quickly developed by Ampex into commercially-produced two-track and three-track recorders, and these machines were the backbone of the professional recording studio, radio, and TV industry in the 1950s and early 1960s. 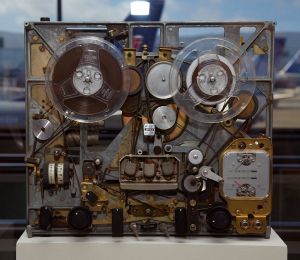 In 1954, Paul continued to develop this technology by commissioning Ampex to build the first eight track tape recorder, at his expense. The machine took three years to get working properly, and Paul says that by the time it was functional, his music was out of favor and so he never had a hit record using it. His design, later known as "Sel-Sync," (Selective Synchronization) in which a specially modified recording head could either record a new track or play back a previously recorded one, was the core technology for multitrack recording for the next 30 years.

Paul and Ford, as well as Crosby, also used the now-ubiquitous recording technique known as close miking, where the microphone is less than six inches from the singer's mouth. This produces a more intimate, less reverberant sound than is heard when a singer is a foot or more from the microphone. The technique emphasizes low-frequency sounds in the voice due to the microphone's proximity effect and can give a more relaxed feel because the performer is not working so hard. The result is a singing style which diverged strongly from unamplified theater-style singing. Les Paul in the recording studio

In the late 1960s, Paul went into semi-retirement, although he returned to the studio occasionally. He and Mary Ford divorced in December 1964. Paul recorded a successful album for London Records, Les Paul Now in 1967, on which he updated some of his earlier hits. A decade later, backed by some of Nashville's celebrated studio musicians, he produced a meld of jazz and country improvisation with fellow guitar virtuoso Chet Atkins, entitled Chester and Lester, for RCA Victor.

A biographical, feature length documentary, titled Chasing Sound: Les Paul at 90, made its world premiere on May 9, 2007 at the Downer Theater in Milwaukee, Wisconsin. Paul appeared at the event and spoke briefly to the enthusiastic crowd. In June 2008, an exhibit showcasing his legacy and featuring items from his personal collection opened at Discovery World in Milwaukee. Paul played a concert in Milwaukee to coincide with the opening of the exhibit.

Paul is the godfather of rock guitarist Steve Miller of the Steve Miller Band, to whom Paul gave his first guitar lesson.

Retrieved from https://www.newworldencyclopedia.org/p/index.php?title=Les_Paul&oldid=1083906
Categories:
Hidden category:
This page was last edited on 25 October 2022, at 22:00.
Content is available under Creative Commons Attribution/Share-Alike License; additional terms may apply. See Terms of Use for details.