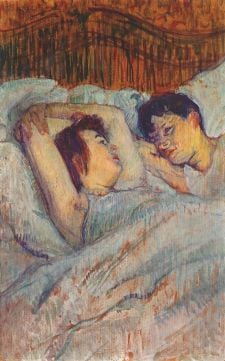 A lesbian is a woman who is romantically and sexually attracted solely to other women. Women who are attracted to both women and men are more often referred to as bisexual. An individual's self-identification might not correspond with her behavior, and may be expressed with either, both, or neither of these words. The definition and social norms, including public policy, concerning lesbians have evolved over the course of history.

While male homosexuality has been well documented, albeit controversially, over the centuries and numerous cultures, female sexuality received much less attention. Many, in fact, regarded women as passive partners in sexual encounters, and that same-sex encounters were non-existent and of no interest to women. With the development of studies of sexology as well as the feminist movements in Europe and the United States in the twentieth century, lesbianism became more widely acknowledged. Lesbians have faced similar issues of discrimination, and the desire for same-sex marriage and the option of rearing children that male homosexuals have encountered. While the LGBT movement has gained ground in the acceptance of all people as members of society, the issue of norms of sexual behavior remains controversial.

Did you know?
The word "lesbian" is derived from the name of the Greek island of Lesbos, home to the poet Sappho

The earliest known written references to lesbian or same-sex love between women come from ancient Greece. Sappho (the eponym of "sapphism"), who lived on the island of Lesbos in the sixth century B.C.E., wrote poems which apparently expressed her sexual attraction to other females. Hence the use of the term "Lesbian" to refer to same-sex relationships in women. However, some ancient accounts also describe her as having had love affairs with men. Moreover, Maximus of Tyre wrote that Sappho's relationships with the girls in her school were platonic (non sexual, or based on friendship). 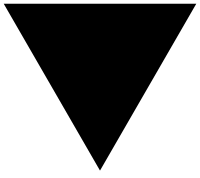 The Black Triangle was used to identify "socially unacceptable" women in concentration camps by the Nazis. Lesbians were included in this classification. Since then lesbians have appropriated the black triangle as a symbol of defiance against repression and discrimination as gay men have similarly appropriated the pink triangle

Before European sexology emerged at the turn of the twentieth century, female homosexuality remained almost invisible compared to male homosexuality, which was subject to the law and thus more regulated and reported by the press. However with the publication of works by sexologists like Karl Heinrich Ulrichs, Richard von Krafft-Ebing, Havelock Ellis, Edward Carpenter, and Magnus Hirschfeld, the concept of active female homosexuality became better known.

As female homosexuality became more visible it was initially described as a medical condition. In Three Essays on the Theory of Sexuality (1905), Sigmund Freud referred to female homosexuality as "inversion" or "inverts" and characterized female inverts as possessing male characteristics. Freud drew on the "third sex" ideas popularized by Magnus Hirschfeld and others. While Freud admitted he had not personally studied any such "aberrant" patients he placed a strong emphasis on psychological rather than biological causes.

This combination of sexology and psychoanalysis eventually had a lasting impact on the general tone of most lesbian cultural productions. A notable example is the 1928 novel The Well of Loneliness by Radclyffe Hall, in which these sexologists are mentioned along with the term "invert." Freud's interpretation of lesbian behavior has since been rejected by most psychiatrists and scholars, although there has been biological research that has provided findings that may bolster a Hirschfeld-ian "third sex" interpretation of same-sex attraction.

During the twentieth century, lesbians such as Gertrude Stein and Barbara Hammer were noted in the U.S. avant-garde art movements, along with figures such as Leontine Sagan in German pre-war cinema. Since the 1890s the underground classic The Songs of Bilitis has been influential on lesbian culture. This book provided a name for the first campaigning and cultural organization in the United States, the Daughters of Bilitis.

During the 1950s and 1960s lesbian pulp fiction was published in the U.S. and U.K., often under "coded" titles such as Odd Girl Out, The Evil Friendship by Vin Packer and the Beebo Brinker series by Ann Bannon. British school stories also provided a haven for "coded" and sometimes outright lesbian fiction.

During the 1970s the second wave of feminist era lesbian novels became more politically oriented. Works often carried the explicit ideological messages of separatist feminism and the trend carried over to other lesbian arts. Rita Mae Brown's debut novel Rubyfruit Jungle was a milestone of this period.

In 1972 the Berkeley, California lesbian journal Libera published a paper entitled "Heterosexuality in Women: its Causes and Cure." Written in deadpan, academic prose, closely paralleling previous psychiatry-journal articles on homosexuality among women, this paper inverted prevailing assumptions about what is normal and deviant or pathological and was widely read by lesbian feminists.

Since the 1980s lesbians have been increasingly visible in mainstream cultural fields such as music (Melissa Etheridge, K.D. Lang, and the Indigo Girls), sports (Martina Navrátilová and Billie Jean King), and in comic books (Alison Bechdel and Diane DiMassa). Lesbian eroticism has flowered in fine art photography and the writing of authors such as Pat Califia, Jeanette Winterson, and Sarah Waters. There is also a significant body of lesbian films. Classic novels such as those by Jane Rule have been reprinted. Moreover, prominent and controversial academic writers such as Camille Paglia and Germaine Greer also identify with lesbianism. 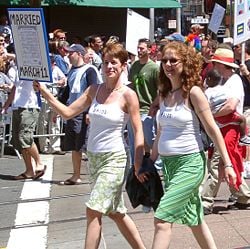 Historically, many lesbians have been involved in women's rights. Late in the nineteenth century, the term Boston marriage was used to describe romantic unions between women living together while contributing to the suffrage movement. Continuing this tradition, in 2004, Massachusetts became the first American state to legalize same-sex marriages.[4]

During the 1970s and 1980s, with the emergence of modern feminism and the radical feminism movement, lesbian separatism became popular and groups of lesbian women gathered together to live in communal societies. Women such as Kathy Rudy remarked that in her experience, stereotypes and the hierarchies to reinforce them developed in the lesbian separatist collective she lived in, ultimately leading her to leave the group.[5]

There is a body of research and writing on lesbian sexuality which has brought some debate about the control women have over their sexual lives, the fluidity of woman-to-woman sexuality, the redefinition of female sexual pleasure, and the debunking of negative sexual stereotypes. One example of the latter is lesbian bed death, a term invented by sex researcher Pepper Schwartz to describe the supposedly inevitable diminution of sexual passion in long term lesbian relationships; this notion has been rejected by many lesbians, who pointed out that passion tends to diminish in almost any relationship and many lesbian couples have reported happy and satisfying sex lives.

The relationship between lesbianism and lesbian-identified transgender or transsexual women has been a turbulent one, with historically negative attitudes. Some lesbian groups openly welcome transsexual women and may even welcome any member who identifies as lesbian, but a few groups do not welcome transwomen.

Disputes in defining the term "lesbian" along with enforced exclusions from lesbian events and spaces have been numerous. Some who hold a non-inclusionist attitude often make reference to strong, typically second-wave feminist ideas such as those of Mary Daly, who has described post-operative male-to-female (MTF) transsexuals as "'constructed women." They may attribute transsexualism to mechanisms of patriarchy or do not recognize a MTF transsexual's identification as female and lesbian. By defining "lesbian" through these views, they defend the non-inclusion of women with transsexual or transgender-backgrounds.

Inclusionists claim these attitudes are inaccurate and derive from fear and distrust, or that the motivations and attitudes of transgender or transsexual lesbians are not well understood, and so they defend the inclusion of transwomen into lesbianism and lesbian spaces.

One incident due to this divisiveness arose during the early 1990s in Australia, when the wider lesbian community raised money to purchase a building devoted to lesbian women called The Lesbian Space Project. Before the organization bought the building, a debate over inclusion of transwomen polarized the lesbian community, the building was later closed, the funds were invested and instead generated money for an annual Australian lesbian grants program called LInc (Lesbians Incorporated).

In the United Kingdom, lesbianism has never been illegal. In contrast, sexual activity between males was not made legal in England and Wales until 1967. It is said that lesbianism was left out of the Criminal Law Amendment Act of 1885 because Queen Victoria did not believe sex between women was possible, although this story may be apocryphal.[6] A 1921 proposal put forward by Frederick Macquisten MP to criminalize lesbianism was rejected by the House of Lords; during the debate, Lord Birkenhead, then Lord Chancellor argued that 999 women out of a thousand had "never even heard a whisper of these practices."[7]

In 1928, the lesbian novel The Well of Loneliness was banned for obscenity in a highly publicized trial, not for any explicit sexual content but because it made an argument for acceptance.[8] Meanwhile other, less political novels with lesbian themes continued to circulate freely,[9]

Jewish religious teachings condemn male homosexual behavior but say little about lesbian behavior. However, the approach in the modern state of Israel, with its largely secular Jewish majority, does not outlaw or persecute gay sexual orientation; marriage between gay couples is not sanctioned but common law status and official adoption of a gay person's child by his or her partner have been approved in precedent court rulings (after numerous high court appeals).

Western-style homosexuality is rarely tolerated elsewhere in the Muslim world, with the possible exception of Turkey. It is punishable by imprisonment, lashings, or death in Saudi Arabia and Yemen. Though the law against lesbianism in Iran has reportedly been revoked or eased, prohibition of male homosexuality remains.

Family issues were significant concerns for lesbians when gay activism became more vocal in the 1960s and 1970s. Custody issues in particular were of interest since often courts would not award custody to mothers who were openly homosexual.

Also, many lesbian couples seek to have children through adoption, domestically or internationally, or provide a home as a foster parent, but this is not legal in every country. Access to in vitro fertilization (IVF) treatments is also the subject of debate in many countries.