Henri de Toulouse-Lautrec (IPA /ɑ̃ʁi də tuluz lotʁɛk/) (November 24, 1864 – September 9, 1901) was a French painter, printmaker, draftsman, and illustrator, whose immersion in the decadent and theatrical life of fin de siècle Paris yielded an oeuvre of provocative images of modern life. Toulouse Lautrec is considered to be a post-impressionist. Post-Impressionism was both an extension of Impressionism and a rejection of its limitations. Post-Impressionists continued using vivid colors, thick application of paint, distinctive brushstrokes and real-life subject matter, but they were more inclined to emphasize geometric forms, to distort form for expressive effect, and to use unnatural or arbitrary color.

Henri Marie Raymond de Toulouse-Lautrec Monfa was born in Albi, Tarn in the Midi-Pyrénées Region of France, some 50 miles from Toulouse, the firstborn child of Comte Alphonse and Comtesse Adèle de Toulouse-Lautrec. An aristocratic family with a long and distinguished ancestry. The Comte and Comtesse were first cousins, and Henri suffered from a number of congenital health conditions attributed to this tradition of inbreeding (see below). A younger brother was born to the family on August 28, 1867, but died the following year. Three cousins within the extended family were true dwarfs.

At ages 13 and 14, Henri fractured both his thigh bones. The breaks did not heal properly (modern physicians attribute this to an unknown genetic disorder along the lines of osteoporosis or osteogenesis imperfecta; others speak of rickets aggravated with praecox virilism), and his legs ceased to grow, so that as an adult he was only 1.52 m/5 ft tall, having developed an adult-sized torso while retaining his child-sized legs. He also had severe sinus problems which caused a life-long condition of intense headaches and an odd sniff whenever he spoke. It has also been speculated that he had hypertrophied genitals. This might, however, be due only to the seeming contrast with his stunted legs observed by friends.

He cut an unusual and distinctive figure lurching along the streets and through the cafes of Montmartre. It is impossible to deeply consider the nature of his art without considering some of the cruel ironies which nature seems to have imposed upon him.

Born to a father who was handsome, athletic and a well-known hunter, horseman and womanizer, Henri was often confronted with the glaring contrast between his stunted form and this aristocratic ideal. His mother, Adele de Toulouse Lautrec, a pious Catholic, seems to have countered his father's rejection by reading and showing illustrated books to Henri which may well have stimulated his early interest in art.

Though a lively and curious child, a painful awareness of his bodily and social situation seems to have taken deep hold in early adolescence. At 14 he made several drawings of "La Belle et La Bete" (Beauty and the Beast) as thinly disguised self-parodies. Strongly drawn to feminine beauty, he was also barred from any realization of youthful desire. Commenting on an attraction to his cousin Jeanne d'Armagnac, young Henri wrote that, "...I lack the courage to look at her, so tall and so beautiful, as for myself–I am neither of these." The letter is signed "Monsieur Cloche-Pied (Mr. Peg Leg)."[1] This tension seems to run lifelong through Lautrec's life and art. Sardonic wit, alcoholism, debauchery, exhibitionism, and artistic flair all served to cloak the psychic frustration which surfaced only rarely as honestly as it had at 14.

Research supports that the artist's deformities were most likely caused by pycnodysostosis. After studying for a time under a Monsieur Princeeau, who also suffered from a handicap, Toulouse-Lautrec immersed himself in the heady, avant-garde atmosphere of Paris and in his art. He became an important post-Impressionist painter, art nouveau illustrator, and lithographer and recorded in his works many details of the late-nineteenth-century bohemian lifestyle in Paris. This, of course, was centered in the cafes, cabarets, and bordellos of Montmartre, a hilly region at the outskirts of Paris that had for centuries been a haven for thieves, outcasts, and prostitutes. In Lautrec's day, it attracted artists and writers who came for the cheap rents, as well as a fringe of more bourgeois society curious about life on "the wilder side."

He often portrayed life at the Moulin Rouge as well as other Montmartre and Parisian cabarets and theaters, and, particularly, in the brothels that he frequented avidly, eventually contracting syphilis. He lived there for long periods among the women that adopted him wholeheartedly and made him their confidant and the witness of their most intimate acts which inspired the lesbian scenes of many of his drawings and paintings. He painted singer Yvette Guilbert, Louise Weber, known as the outrageous La Goulue, the glutton, a dancer who is said to have created the "French Can-Can," and the wiry British dancer, Jane Avril.

In his work Lautrec seems to have reflected a popular interest in Social Realism reflected in the work of many other artists and writers of the time. Though often flamboyant and even exaggerated, there is nevertheless a strain of unsentimental, sometimes brutal psychological realism present which sets Lautrec apart. Many of his images show his subjects apart from their public personas. Painted faces reveal undercurrents of jadedness, the fatigue of excess, hints of death, and depression beneath the dazzle. Lautrec both celebrated and demythified Fin de Siecle Paris, exposing its artificiality, poverty, crime, exploitation, and hypocrisy. Vice and disease, to which he was himself no stranger, are often evident in his works. The painter Auguste Renoir said of Toulouse Lautrec's paintings, "They are frequently pornographic but always desperately sad."[2] It is part of Lautrec's enduring fascination that he can be at once so depreciating and yet tender and humane. This too seems to reflect on the ironic self-image of the artist who once said, "I will always be a thoroughbred hitched up to a rubbish cart." [3]

Though Lautrec is best known for his portrayals of cabarets, bars, and brothels the wide range of his work also includes more sedate portraits of friends and family members, circus scenes, the streets of Montmartre, racetracks, humorous cartoons, and animals, (a theme carried on from early childhood). He avidly took in influences which affected his contemporaries as well. He was personally acquainted with and borrowed from the work of Edgar Degas. He used the new technique of stop action photography, as well as studying Japanese perspective and divisionist color theory. He was well known for working directly from cafe and cabaret tables while chatting and drinking heavily with a group of friends. His art anticipates the later postmodern era in its preoccupation with the fleeting nature of disconnected fragments of life, "the passing show."

An alcoholic for most of his adult life, he was placed in a sanatorium shortly before his death. He had become deeply paranoid, imagining that the police were always planning to raid his studio, and that his family was plotting to cheat him of his inheritance. During a short recovery period, a very telling incident occurred which sheds light on Henri's hidden side. Always sarcastic about love and bourgeois hypocrisy, he nevertheless asked an uncle for the hand of his 20-year-old cousin Aline. She was unaware of the proposal, as her father never related Lautrec's embarrassing request to her. The artist, who had often compared himself to Cyrano de Bergerac, died from complications due to alcoholism and syphilis at the family estate in Malromé, fewer than three months before his thirty-seventh birthday. He is buried in Verdelais, Gironde, a few kilometers from his birthplace. His last words reportedly were "Le Vieux con!" ("the old fool"),[4] when he saw his father trying to kill a fly in the room with his garter.

The invention of the Tremblement de Terre, Earthquake (cocktail) is attributed to Toulouse-Lautrec, a potent mixture containing four parts Absinthe, two parts Red Wine, and a dash of Cognac. 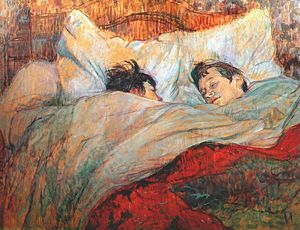 After his death, his mother, the Comtesse Adèle Toulouse-Lautrec, and Maurice Joyant, his art dealer, promoted his art. His mother contributed funds for a museum to be built in Albi, his birthplace, to house his works. As of 2005, his paintings have sold for as much as $14.5 million. Echoes of Lautrec may be seen in the work of artists who appeared on the scene as contemporasries and immediately following him. The early Picasso in his blue and rose periods resembles Lautrec both in handling and subject matter. Lautrec's sense of immediacy and simplified, flat shapes were to be an important feature of modernist painting for years to come. His revelation of the tragic and ironic quality of everyday modern life is also a feature that would characterize much of art and literature throughout the twentieth century.