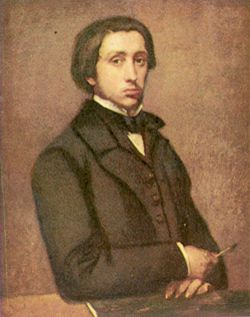 Edgar Degas (July 19, 1834 – September 27, 1917) was a French artist famous for his work in painting, sculpture, and drawing. He is generally regarded as one of the founders of impressionism, although his work reflects other influences as well. He was part of a group of nineteenth-century French painters that helped to reshape the modern aesthetic from realistic representation to a more subjective perspective, reflecting the internal vision of the artist. This artistic development parallels a growing sense of subjectivity that pervades the rest of modern Western culture. Controversial is his own time, his works have become an important part of the artistic canon. His early study of classical art prefaced a body of mature works which convincingly placed the human figure in contemporary environments.

Degas was born on July 19, 1834 in Paris, France to Celestine Musson de Gas, and Augustin de Gas, a banker. The de Gas family was moderately wealthy.[1] At age 11, Degas began his schooling, and started down the road of art with enrollment in the Lycee Louis Grand.[2]

Degas began to paint seriously early in life; by eighteen he had turned a room in his home into an artist's studio, but he was expected to go to law school, as were most aristocratic young men. Degas, however, had other plans and left his formal education at age 20. He then studied drawing with Louis Lamothe, under whose guidance he flourished, following the style of Jean Auguste Dominique Ingres.[3] In 1855 Degas met Ingres and was advised by him to "draw lines, young man, many lines.”[4] In that same year, Degas received admission to the Ecole des Beaux-Arts.[5] The next year, Degas traveled to Italy, where he saw the paintings of Michelangelo, Raphael, and other artists of the Renaissance.[6]

After returning from Italy, Degas copied paintings at the Louvre. In 1865 some of his works were accepted in the Paris Salon. During the next five years, Degas had additional works accepted in the Salon, and gradually gained respect in the world of conventional art. In 1870 Degas' life was changed by the outbreak of the Franco-Prussian War. During the war, Degas served in the National Guard to defend Paris,[7] allowing little time for painting.

Following the war, Degas visited his brother, Rene, in New Orleans and produced a number of works, many of family members, before returning to Paris in 1873.[7] Soon after his return, in 1874, Degas helped to organize the first Impressionist Exhibition.[8] The impressionists subsequently held seven additional shows, the last in 1886, and Degas showed his work in all but one.[7] At around the same time, Degas also became an amateur photographer, both for pleasure and in order to accurately capture action for painting.[9]

Eventually Degas relinquished some of his financial security. After the death of his father, various debts forced him to sell his collection of art, live more modestly, and depend on his artwork for income.[10] As the years passed, Degas became isolated, due in part to his belief that "a painter could have no personal life."[11] He never married and spent the last years of his life "aimlessly wandering the streets of Paris" before dying in 1917.[12] Degas is often identified as an impressionist, and while he did associate with other Impressionists and adopt some of their techniques, the appellation is an insufficient description.[12] Technically, Degas differed from the impressionists in that he "never adopted the Impressionist color fleck"[9] and "disapproved of their work."[12] Degas was, nonetheless, closer to impressionism than any other movement. Impressionism was a short, varied movement during the 1860s and 1870s that grew in part out of realism and the ideas of two painters, Courbet and Corot. The movement used bright, "dazzling" colors, while still concentrating primarily on the effects of light[13]

Degas had his own distinct style, one developed from two very different influences, Jean Auguste Dominique Ingres, and Ukiyo-e (Japanese prints).[14] Degas, though famous for horses and dancers, began with conventional historical paintings such as The Young Spartans.

During his early career, Degas also painted portraits of individuals and groups; an example of the latter is The Bellelli Family (1859), a brilliantly composed and psychologically poignant portrayal of his aunt, her husband and children. In these early paintings, Degas already evidenced the mature style that he would later develop more fully by cropping subjects awkwardly and portraying historical subjects in a less idealized manner.[15] Also during this early period, Degas was drawn to the tensions present between men and women.

By the late 1860s, Degas had shifted from his initial forays into historical painting to an original observation of contemporary life. He began to paint women at work; milliners, laundresses, opera performers, and dancers. Degas began to paint café life as well. As his subject matter changed, so too did Degas' technique. His dark palette which bore the influence of Dutch painting gave way to the use of vivid colors and "vibrant strokes."[14] 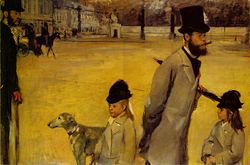 Paintings such as Place de la Concorde read like "snapshots freezing moments of time to show them accurately, imparting a sense of movement."[9] His paintings also showed subjects from unusual angles. All of these techniques were used with Degas's self-expressed goal of "'bewitching the truth.'"[9] Degas used devices in his paintings which underscored his personal connection to the subjects: Portraits of friends were included in his genre pieces, such as in The Musicians of the Opera. Literary scenes were modern, but of highly ambiguous content; for example, Interior, which was probably based on a scene from Therese Raquin.[16]

By the later 1870s, Degas had mastered not only the traditional medium of oil on canvas, but pastel as well.[17] The dry medium, which he applied in complex layers and textures, enabled him to more easily reconcile his facility for line with a growing interest in expressive color. He also ceased to paint individual portraits and began instead to paint generalized personalities based on their social stature or form of employment. In the 1879 painting, Portraits, At the Stock Exchange, he portrayed a group of Jewish businessmen with a hint of the misanthropy which would increase with age.

These changes engendered the paintings that Degas would produce in later life. Degas began to draw and paint women drying themselves with towels, combing their hair, and bathing, such as in After the Bath. His strokes also became "long" and "slashing."[18] The meticulous naturalism of his youth gave way to an increasing abstraction of form. But for the brilliant draftsmanship and obsession with the figure, the pictures created in this late period of his life bear little superficial resemblance to his early paintings.[19] Ironically, it is these paintings, created late in Degas' life, and after the end of the impressionist movement, that use the techniques of impressionism.[20]

For all the stylistic evolution, certain features of Degas' work remained the same throughout his life. He always worked in his studio, painting either from memory or models. Also, Degas often repeated a subject many times.[21] Finally, Degas painted and drew, with few exceptions, indoor scenes. 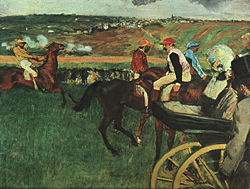 During his life, public reception of Degas' work ran the gamut from admiration to contempt. As a promising artist in the conventional mode and in the several years following 1860, Degas had a number of paintings accepted in the Salon. These works received praise from Pierre Puvis de Chavannes and the critic, Castagnary.[22] However, Degas soon joined the impressionist movement and rejected the Salon, just as the Salon and general public rejected the impressionists. His work was at that time considered controversial, and Degas was ridiculed by many, including the critic, Louis Leroy.[23]

Today, Degas is thought of as "one of the founders of impressionism,"[26] his work is highly regarded, and his paintings, pastels, drawings, and sculpture (most of the latter were not intended for exhibition, and were only discovered after his death) are on prominent display in many museums. Degas had no formal pupils, however he did greatly influence several important painters, most notably Jean-Louis Forain, Mary Cassatt, and Walter Sickert.

Retrieved from https://www.newworldencyclopedia.org/p/index.php?title=Edgar_Degas&oldid=1043427
Categories:
Hidden category:
This page was last edited on 6 October 2020, at 17:14.
Content is available under Creative Commons Attribution/Share-Alike License; additional terms may apply. See Terms of Use for details.