Raphael or Raffaello (April 6, 1483 – April 6, 1520) was an Italian master painter and architect of the Florentine school in High Renaissance, celebrated for the perfection and grace of his paintings. He is most well known for his Madonnas and his work in the Vatican. He was also called Raffaello Sanzio, Raffaello Santi, Raffaello da Urbino, or Rafael Sanzio da Urbino.

Raphael apprenticed with Perugino, studied the work of Michelangelo and Leonardo da Vinci, and was influenced by Fra Barolomeo toward painting more robust figures. At 25, he moved to Rome and was commissioned by Pope Julius II to paint some of the rooms at his palace at the Vatican. At 31, he became architect of St. Peter's Basilica. The next year, 1515, he was entrusted with the preservation and recording of the Vatican collections of ancient sculpture.

In addition to his many famous paintings, Raphael is also known for his ten cartoons for tapestries with scenes of the lives of Saint Paul. Marcantonio Raimondi also turned a number of Raphael's sketches into engravings that were distributed throughout Europe which allowed more people to see his work and added to his reputation.

He never married, and died at age 37 on his birthday, from a wrong dosage of medicine for fever after a long night of passion with his lover, Margherite, whose image is seen in his painting, La Fornarina. He was buried in the Pantheon, at his own request.

Raphael (his baptismal name) was born in Urbino, Italy. The surname Sanzio derives from the latinization of the Italian, Santi, into Santius. His father, Giovanni Santi, was a lesser painter in the court of Urbino.

When Raphael was eight years old, in 1491, his mother Màgia died; his father died in 1494, having already remarried. Thus, orphaned at eleven, Raphael was entrusted to his uncle Bartolomeo, a priest. He had already shown artistic talent, according to biographer Giorgio Vasari, who relates that since childhood Raphael had been "a great help to his father." His father's workshop continued to function, and Raphael evidently played a part in managing it probably together with his stepmother. He is described as a "master" at 18 years of age in 1501. In Urbino, he came into contact with the works of Uccello and Signorelli. According to Vasari, his father had placed him in Perugino's workshop as an apprentice "despite the tears of his mother." 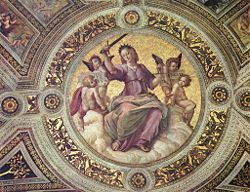 His first documented work was an altarpiece for the church of San Nicola of Tolentino in Città di Castello, a town halfway between Perugia and Urbino. It was finished in 1501, although it was later seriously damaged during an earthquake in 1789, and today only fragments of it remain. In the following years he painted works for other churches there and in Perugia, including the Wedding of the Virgin (today in the Brera gallery in Milan).

In 1504, Raphael went to Florence, where he studied the work of Leonardo da Vinci and Michelangelo. He spent almost four years there in what is called his "Florentine period," but continued to travel and work in other places, such as Perugia, Urbino and perhaps also Rome. He made friends with the local painters, particularly Fra Bartolomeo, who influenced him to discard the thin, graceful style of Perugino for more the grandiose and powerful forms which typified his later work.

At the end of 1508, Rafael moved to Rome and was immediately commissioned by Pope Julius II to paint some of the rooms at his palace at the Vatican. This marked a turning point for Rafael, who was only 25 years old, an artist still in formation, and had not previously received commissions of such importance and prestige. He exploited the situation to his advantage, and remained almost exclusively in the service of Julius and his successor, Leo X.

In 1514, aged 31, he was named architect of the new St Peter's. However, much of his work there was altered or demolished after his death. He also designed other buildings, and for a short time was both the most important architect and painter in Rome. In 1515, he was entrusted with the preservation and recording of the Vatican collections of ancient sculpture.

After his arrival in Rome, he devoted his efforts to the great Vatican projects, although he still painted portraits of his two main patrons, the popes Julius II and his Leo X, the latter portrait is considered one of his finest.

One of his most important papal commissions was the so-called Raphael Cartoons (now in Victoria and Albert Museum), a series of 10 cartoons for tapestries with scenes of the lives of Saint Paul and Saint Peter, intended as wall decoration for the Sistine Chapel. The cartoons were sent to Bruxelles to be sewn in the workshop of Pier van Aelst, and the first three tapestries were sent to Rome in 1519. It is possible that Raphael saw the finished series before his death, as they were completed in 1520, for Leo X.

In Rome, Raphael lived in Borgo. He never married, but it appears that in 1514, he was engaged to Maria Bibbiena (a cardinal's granddaughter); she died in 1520. The other woman in his life was a beauty named Margherita, the daughter of a baker named Francesco Luti from Siena, who lived at via del Governo Vecchio. His La Fornarina (meaning female baker) is a depiction of her. 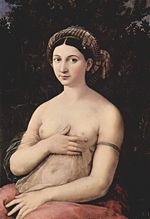 According to Vasari, his premature death on Good Friday (April 6, 1520) was caused by a night of excessive sex with Margherita, after which he fell into a fever and, not telling his doctors the true cause, was given the wrong cure, which killed him. Despite his acute illness, Raphael was aware enough to receive the last rites and put his affairs in order. He took care to dictate his will, in which he left sufficient funds for Margherita's welfare, entrusted to his loyal servant Bavera.

At his request, he was buried in the Pantheon. Raphael died on his thirty-seventh birthday, with his funeral mass celebrated at the Vatican, and his Transfiguration placed at the head of his bier.

Raphael made no prints himself, but entered into a collaboration with Marcantonio Raimondi to produce engravings based on Raphael's designs, which created many of the most famous Italian prints of the century, and was important in the rise of the reproductive print. A total of about 50 prints were made; some were copies of Raphael's paintings, but other designs were apparently created only to be made into prints. Raphael also made preparatory drawings for Raimondi to translate into engraving, many of which survive. The two most famous original prints to result from the collaboration were Lucretia and The Massacre of the Innocents. Outside Italy, reproductive prints by Raimondi and others were the main way that Raphael's art was known until the twentieth century.

The inscription in his marble sarcophagus, written by Pietro Bembo, reads: Ille hic est Raffael, timuit quo sospite vinci, rerum magna parens et moriente mori—"Here lies Raffaello who, when alive, Nature was afraid to be won by him, when he died, she wanted to die herself."

Raphael was highly admired by his contemporaries. Although when compared to Michelangelo and Titian, he was sometimes considered inferior, at the same time, it was maintained that none of them shared all the qualities possessed by Raphael, his "ease" in particular.

While we may term other works paintings, those of Raphael are living things; the flesh palpitates, the breath comes and goes, every organ lives, life pulsates everywhere (Vasari, Lives of the Artists).[1]

Raphael painted in oil and tempera and sometimes with gold, on wood, canvas, charcoal on paper, and painted frescoes on plaster walls.