Raphael (רפאל, Hebrew for "God has healed," "God Heals" ) is the name of an archangel in Judaism, Christianity and Islam, who is said to perform all types of healings. Linked to his name is the Hebrew word for a doctor of medicine: Rophe, which has the same root word as Raphael.

Of the seven archangels in the angelology of post-Exilic Judaism, only Michael (Daniel 12:1) and Gabriel (Luke 1: 19-26) are mentioned by name in the scriptures that came to be accepted as canonical by all Christians. However, Raphael is mentioned by name in the Book of Tobit, which is accepted as canonical by Roman Catholic and Orthodox Christians. Another four archangels are named in the second century B.C.E. Book of Enoch (chapter xxi): Uriel, Raguel, Sariel, and Jarahmeel.

The belief in powerful and benevolent spiritual beings is an ancient and common feature of most world religions. In the Bible, angels appeared to Abraham, Jacob, Moses and the prophets, to Joseph and Mary and to some of Jesus' disciples. An angel wrestled with Jacob; another angel released Peter from prison.

However, not all angelic beings are good. Many religions teach of rebellious and evil angels and see angels as catalysts in the fall of humanity, leading to the predicaments of evil and sin.

Angels in the Bible

An angel (from Greek: ἄγγελος, ángelos, meaning "messenger") is a supernatural and ethereal being found in many religions, whose duty is to serve and assist God. Angels typically act as messengers but can perform other tasks such as keeping records of humans' actions, acting as guardians, announcing God's decrees, and waging battles against demons. In some religions, hierarchies of angels are said to exist to help God govern the cosmos and human affairs.

In the Hebrew Bible and the New Testament, angels are a spiritual aspect of God's creation; they exist to execute God's will. Angels reveal themselves to individuals and nations, in order to announce events to affect humans. Angels foretold to Abraham the birth of Isaac, to Manoah the birth of Samson, and to Abraham the destruction of Sodom. In the New Testament, the angel Gabriel announced to Mary the birth of Jesus. An angel appeared in front of the empty tomb, announcing Jesus' resurrection (Luke 24:4).

Guardian angels were also mentioned: God sent an angel to protect the Hebrew people after their exodus from Egypt, to lead them to the promised land, and to destroy the hostile tribes in their way (Exod. 23:20; Num. 20:16). In Judges 2:1, an angel of the Lord addressed the whole people, swearing to bring them to the promised land, and as God watched over Jacob, so is every pious person protected by an angel, who cares for him in all his ways (Ps. 34:7, 78:25, 91:11).

The name of the archangel Raphael appears in the Deuterocanonical Book of Tobit. The Book of Tobit is considered canonical by Roman Catholic, Orthodox and some Protestant Christians. Raphael first appears disguised in human form as the traveling companion of the younger Tobias, calling himself "Azarias the son of the great Ananias." During the adventurous course of the journey the archangel's protective influence is shown in many ways including the binding of the demon in the desert of upper Egypt. After the return and the healing of the blindness of the elder Tobias, Azarias makes himself known as "the angel Raphael, one of the seven, who stand before the Lord" (Tobit 12:15). Compare the unnamed angels in the Book of Revelation (8:2).

Regarding the healing powers attributed to Raphael, we have little more than his declaration to Tobit (Tobit, 12) that he was sent by the Lord to heal him of his blindness and to deliver Sarah, his daughter-in-law, from the devil (Asmodeus) that was the serial killer of her husbands. Among Roman Catholics, he is considered the patron saint of medical workers and matchmakers, and may be petitioned by them or those needing their services.

Among Roman Catholics, Eastern Orthodox and some Protestant Christians Saint Raphael's feast day is kept on September 29, along with that of Saint Michael and Saint Gabriel. Raphael was included for the first time in the Roman Catholic calendar of saints in 1921, for celebration on October 24. This continued until 1969, when September 29 became the day for the joint celebration of the three archangels.[1]

In the New Testament, only the archangels Gabriel and Michael are mentioned by name (Luke 1: 19-26; Jude 1: 9). However, because of the healing role assigned to Raphael, the particular angel in John 5: 1-4 is generally associated with the archangel. These passages describe the pool at Bethesda, where the multitude of the infirm lay awaiting the moving of the water, for "an angel of the Lord descended at certain times into the pond; and the water was moved. And he that went down first into the pond after the motion of the water was made whole of whatsoever infirmity he lay under."

Raphael is sometimes shown (usually on medallions) as standing atop a large fish or holding a caught fish at the end of a line. This is a reference to Book of Tobit (Tobias), where he told Tobias to catch a fish, and then uses the galbladder to heal Tobit's eyes, and to drive away Asmodeus by burning the heart and liver.[2] 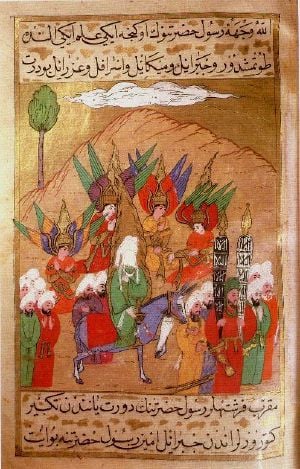 Seen in this sixteenth-century Islamic miniature is Raphael, along with Michael, and Gabriel, accompanying Muhammad to Mecca.

According to the Hadith, Israfil (Raphael in Arabic) is the Angel responsible for signalling the coming of Judgment Day by blowing the horn (namely Sûr) and sending out a "Blast of Truth." Unlike Jibrail (Gabriel) and Mikail (Michael), this archangel was not mentioned by name in the Quran.

It is said that the Sûr will be blown two times. The first blow of the Sûr signals the beginning of the Judgment Day and with the second blow, all the souls are gathered somewhere between heaven and hell, and interrogated for their good deeds and sins.

Eude in angelology and the occult

According to the occultist Johannes Trithemius (1462–1516), Raphael is one of the seven angels of the Apocalypse (this opinion is derived from Enoch 20) and numbered among the ten holy sefiroth. Furthermore, Raphael is also denoted as one of the seven Archangels who stand in the presence of God, as well as a ruler of the Cherubim and Archangel classes in the heavenly hierarchy. The Archangel, alongside Zarachiel, also holds dominion over Raquia, the Second Heaven.

Modern occultists sometimes associate Raphael with the colors yellow or gold and emerald green, the direction East (or West), the element Air, the crystal emerald and the Suit of Swords of the Tarot in traditions loosely derived from reports of Kabbalism. According to Francis Barrett (The Magus, vol. II, 1801), Raphael has also been denoted as the angel of science and knowledge, as well as the preceptor angel of Isaac. Other titles attributed to Raphael include the angel of prayer, love, joy, light, as well as the guardian of both the Tree of Life and of humanity.

Raphael in the Book of Enoch

Raphael bound Azazel under a desert called Dudael according to the Book of Enoch 10:5-7:

"And again the Lord said to Raphael: 'Bind Azazel hand and foot, and cast him into the darkness: and make an opening in the desert, which is in Dudael, and cast him therein. And place upon him rough and jagged rocks, and cover him with darkness, and let him abide there for ever, and cover his face that he may not see light. And on the day of the great judgement he shall be cast into the fire."[3]

Retrieved from https://www.newworldencyclopedia.org/p/index.php?title=Raphael_(Archangel)&oldid=1073153
Categories:
Hidden category:
This page was last edited on 17 July 2022, at 05:15.
Content is available under Creative Commons Attribution/Share-Alike License; additional terms may apply. See Terms of Use for details.