Joseph (also Joseph the Betrothed, Joseph of Nazareth, and Joseph the Worker) was, according to Christian tradition, the husband of Mary and the adopted father of Jesus of Nazareth. Christian faith holds that Joseph did not physically beget Jesus, but that Mary had conceived him through divine means.[1]

According the Matthew's Gospel, Joseph agonized over Mary's apparently illegitimate pregnancy but protected her and the unborn Jesus by accepting her as his wife after an angel appeared to him in a dream and directed him to do so. Receiving rich presents from mysterious eastern magi at Bethlehem after Jesus' birth, he then fled to Egypt to avoid the wrath of Herod the Great, returning to the land of Israel after Herod's death and settling in Nazareth. In Luke's account, Joseph travels to Bethlehem for a census and returns to Nazareth without going to Egypt, after presenting Jesus publicly in the Temple of Jerusalem.

Little else is known of Joseph except that he was reportedly descended from King David and worked as a carpenter. Joseph's death is not recorded in the Bible. He is reported by Luke to still be alive when Jesus was around 12 years old (Luke 2:41-42), and the lack of any mention of him in the biblical accounts of Jesus' adult ministry is taken to imply that he had already died by that time. Controversy exists as to whether he and Mary ever engaged in conjugal relations or had other children together. A notable fact about Joseph is that not a single word is spoken by him in any of the Four Gospels.

In the Roman Catholic and other traditions Joseph is the patron saint of workers and has several feast days. Many cities, churches, hospitals, schools, and other institutions are named for him. The Spanish rendering of his name, San Jose, is reportedly the most common place name in the world.

Joseph takes an active role only in the Gospel of Matthew and the Gospel of Luke. He is not mentioned in Mark, and in John his name is used only as the surname of Jesus, as in "Is this not Jesus, the son of Joseph, whose father and mother we know?" (John 6:42)

Joseph in the Book of Matthew 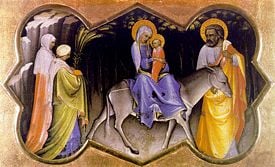 Joseph leads his family to safety in Egypt to escape from Herod, mentioned in Matthew, but not by Luke.

Matthew begins his Gospel (Matthew 1:1-16) with a genealogy, starting with Abraham and then tracing Jesus' lineage through King David down through the generations until Joseph. The genealogy is paradoxical in that it proves Jesus' Davidic lineage through Joseph, and yet Matthew claims that Joseph was not Jesus' physical father. It goes on to explain that Joseph's discovered his betrothed wife,[2], Mary, to be pregnant before he had intercourse with her. A righteous man, he did not wish to expose her to public disgrace or punishment, but he did intend to divorce her. An angel appeared to him, however, and instructed Joseph to take Mary as his wife, because the child in her womb was conceived by the Holy Spirit. Joseph complied and married her, but had no sexual relations with her until after she gave birth. In accordance with the angel's instruction, he gave the child the name Yeshua (Jesus), meaning "the Lord saves."

Matthew specifies that Jesus was born in Bethlehem, but does not mention Nazareth as Joseph and Mary's previous dwelling place. After Jesus' birth, magi from the east come to pay homage to him. They present gifts of gold, frankincense, and myrrh, but do not tarry, fearing the wrath of the ruthless King Herod, who sees a threat to his throne in any rumored Messiah. An angel appears to Joseph in another dream and commands him to take his wife and child to Egypt, where they are to remain until Herod's death. When this occurs, Joseph returns to the land of Israel. He apparently intends to return to Bethlehem, but hearing that Herod's son Archelaus reigns in Judea in place of his father, he "withdrew to the district of Galilee, and he went and lived in a town called Nazareth." Joseph plays no further role in Matthew's account of Jesus' life.

Joseph in the Book of Luke 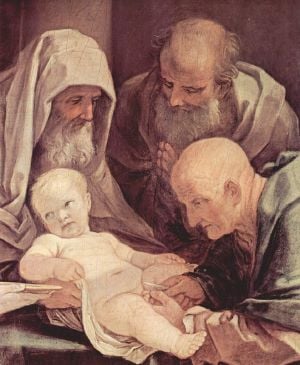 Joseph prays while Jesus is circumcised.

Luke describes Joseph as living in Nazareth at the time of Jesus' conception. Mary, having left the village at an angel's direction, returns to Joseph visibly pregnant after staying for several months at the home of the priest Zechariah, the husband of her cousin Elizabeth. No account is given of Joseph's agony over finding his virgin bride to be pregnant, but an explanation is provided as to how Jesus' birth came to happen at Bethlehem: Joseph goes there to comply with a census order of Caesar Augustus, for Bethlehem, the city of David, is his clan's place of origin.[3] There, Jesus is born in an animal manger, since there is no room at the local inn. The baby is honored by shepherds and angels, but no magi. The threatening figure of Herod does not loom over the scene. Instead, the shepherds joyously spread the news of the miraculous birth; Jesus is circumcised on the eighth day and publicly presented in the Temple of Jerusalem, where the prophets Simeon and Anna testify to him. Joseph then takes his family home to Nazareth, with no mention of a flight to Egypt.

Luke mentions Joseph in one additional story, when the family visits Jerusalem on their yearly pilgrimage at Passover time (2:41). After the feast, Joseph and Mary leave town without the 12-year-old Jesus, thinking him to be in another part of their caravan. Three days later, realizing he is missing, they return and discover him in the Temple courtyard, where he has made a tremendous impression on the teachers and people. Mary scolds him, and Jesus responds that the couple should have realized he would be about "my father's business," obviously not referring to Joseph. The family returns to Nazareth and "his mother kept all these things in her heart." Joseph, however, is not mentioned again.

Several Nativity icons show Joseph tempted by the Devil to break off his betrothal and describe how he resists that temptation. Other images depict his staff as topped with flowers, possibly based on the non-canonical account in the Protevangelion of James of how Mary's spouse was chosen. That same account speaks eloquently of Joseph's agony upon discovering Mary's pregnancy: "He struck his face and threw himself on the ground in sackcloth and wept bitterly…. 'Who has set this trap for me?… Who stole the virgin from me and defiled her? Has not the story of Adam been repeated with me? For while Adam was glorifying God, the serpent came and found Eve alone and deceived her and defiled her—so it has also happened to me.'" This account goes on to say that Joseph himself was accused of illicit sex with Mary and was banished for a period to the desert as a result.

In Catholic tradition, Jesus is described as working side by side with Joseph in Joseph's carpenter shop at Nazareth. Joseph is much praised for responding to the angel's message and protecting Mary when some of those in Nazareth would have stoned her as an adulteress. [4] 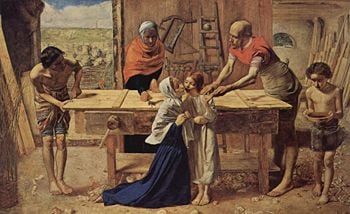 Joseph (second from right) and his family

Questions arise as to the canonical Gospel accounts of Jesus having brothers and sisters—James, Joses, Judah, Simon, and unnamed sisters in Matthew 13:55 and Mark 6:3. A tradition still current in Eastern Orthodoxy explains that Joseph was a widower and that these brothers and sisters were from his first marriage, thus making them Jesus' step-brothers and step-sisters. Catholic traditions leans toward these "brothers" being more distant kinsmen and insists that Joseph never had sexual relations with Mary, who remained a perpetual virgin. The apocryphal History of Joseph the Carpenter, names Jesus' eldest brother as Justus and the sisters as Assia and Lydia, but does not name their mother. [5] Orthodox sources retain the Biblical name of the eldest son and name Joseph's first wife as Salome, his sisters being another Salome and Esther along with an unnamed third sister.[6] Many Protestant denominations—including Evangelical or Fundamental Protestant traditions—no longer espouse strong views on the subject and do not prefix Joseph's name with the honorific "Saint." 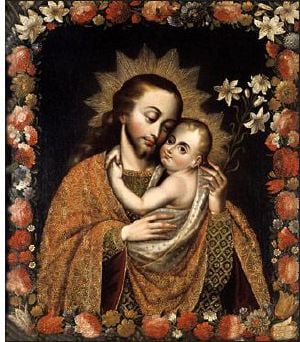 Although always regarded as a saint in both Catholic and Orthodox traditions, Joseph was little celebrated on his own account in the West until the later Middle Ages, following the adoption of his feast by the Franciscans in 1399, and later by the Dominicans. The feast was only added to the Roman Breviary in 1479, and was not compulsory for the whole Catholic Church until 1621. Pope Pius IX proclaimed him the patron of the Universal Church on December 8, 1870.

In the nineteenth century, the Josephite Fathers of the Roman Catholic Church were created under the patronage of Joseph, intending to work with the poor. The first Josephites in America re-devoted their part of the Order to ministry within the newly-emancipated African American community.

He is the unofficial patron against doubt and hesitation, as well as the patron saint of fighting communism, and of a happy death. Having died in the "arms of Jesus and Mary," he is considered the model of a pious believer who receives grace at the moment of death. Pope John XXIII added his name to the Mass canon. Some groups of Traditional Catholics reject this addition, but most use the 1962 missal, which includes this change.

An iconic image of St. Joseph – a carpenter square is a symbol of his trade, and lilies symbolize chastity.

The principal feast day of Saint Joseph in the Catholic Church is March 19, Saint Joseph's Day. The Feast of St. Joseph the Workman (May 1), was introduced by Pope Pius XII in 1955 to counteract May Day, a holiday favored by the left-wing labor movement, socialists, and communists. This also reflects St. Joseph's status as what many Catholics and other Christians consider the "patron of workers."

The Spanish form, San Jose, is the most common place name in the world. Two of the most-recognized San Joses are San José, Costa Rica and San Jose, California, given their name by Spanish colonists. The latter is the subject of the famous song "Do You Know the Way to San José" by Dionne Warwick. 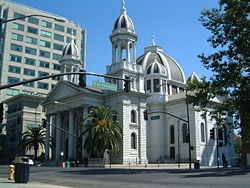 Saint Joseph's Oratory is a Roman Catholic oratory and basilica in Montreal, Canada. Constructed at the wishes of Brother André Besette (Congregation of Holy Cross)—and blessed in the Catholic canon—it is dedicated to St. Joseph who is believed to have performed many miracles of healing in Montreal. The Oratory is the largest church in Canada, with the largest dome of its kind in the world after that of Saint Peter's Basilica in Rome. (Some churches named after St. Joseph are actually dedicated to a different saint, Saint Joseph of Cupertino.)

Sacred Heart Catholic Parish in Muenster, Texas is dedicated to St. Joseph after its first two churches were destroyed by tornadoes on St. Joseph's feast day. Since the parishioners have attended mass on his feast day the recent church has not been destroyed.

Numerous children's hospitals are named for Saint Joseph, as well as many schools.