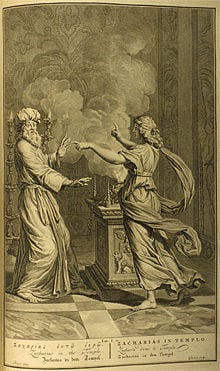 Zechariah meets Gabriel in the Temple of Jerusalem

Zechariah (Zacharias in the King James Version of the Bible) was the father of John the Baptist. He was a Jewish priest of the line of Abijah during the reign of King Herod the Great at the turn of the common era. He was husband of Elizabeth, who was also of a priestly lineage. Their son, John the Baptist, became a famous preacher, identified in the New Testament as a prophet and primary forerunner of Jesus as the Messiah.

According to Luke's gospel, Zechariah received a revelation from the angel Gabriel while ministering in the Temple of Jerusalem, telling him that Elizabeth, though well beyond the age of child-bearing, would bear him a son. He was struck dumb for not initially believing this prophecy. Elizabeth did conceive, and during her pregnancy, she and Zechariah offered hospitality to Elizabeth's cousin Mary. After three months in Zechariah's home, the visibly pregnant Mary returned to Nazareth. After the birth of John the Baptist, Zechariah was able to speak again, and he prophesied that John would "go on before the Lord to prepare the way for him."

The biblical traditions about Zechariah are centered on the birth of John the Baptist; he plays no role in the Jesus story despite Mary's visit to their home. Hence, for most Christians he is a minor figure. A unique view is found in the teachings of the Unification Church, by which Zechariah was Jesus' father.

Zechariah's death is not recorded in the New Testament, although an apocryphal tradition in the Infancy Gospel of James reports that he was murdered by agents of Herod the Great in the temple courtyard.

Zechariah is identified in Luke's gospel as belonging to the division of Abijah, one of the priestly families assigned to temple ministry in 1 Chronicles 23-24. The evangelist states that both Zechariah and Elizabeth were righteous before God, strictly observing all of the traditional commandments and ordinances. Like several important couples in the Hebrew Bible, however, their marriage was childless. Elizabeth was barren and, like her husband, was advanced in years (Luke 1:5-7).

Luke relates that during his clan's turn to serve in Jerusalem, Zechariah was chosen by lot "to go into the temple of the Lord and burn incense" (Luke 1:9). Priestly duties at the Temple in Jerusalem alternated between each of the families that had descended from those appointed by King David to minister there (1 Chronicles 23:1-19). While priests were routinely allowed in the inner courtyard of the temple, to enter the building was a rare privilege. The offering of incense was one of the most solemn parts of the daily worship. Some experts believe that, owing to the large number of eligible priests, no priest could hope to perform the task more than once during his lifetime. While Zechariah ministered at the golden altar of incense, an angel of God announced to him that his wife would give birth to a son, whom he was to name John, who would be a strict Nazirite from birth and would fulfill the mission of the prophet Elijah as the forerunner of the long-expected Messiah.

He will be a joy and delight to you, and many will rejoice because of his birth, for he will be great in the sight of the Lord. He is never to take wine or other fermented drink, and he will be filled with the Holy Spirit even from birth. Many of the people of Israel will he bring back to the Lord their God. And he will go on before the Lord, in the spirit and power of Elijah, to turn the hearts of the fathers to their children and the disobedient to the wisdom of the righteous—to make ready a people prepared for the Lord (Luke 1:14-17).

Citing their advanced age, Zechariah asked for a sign whereby he would know the truth of this prophecy. The angel identified himself as the Archangel Gabriel, sent specially by God to make this announcement. He declared that because of Zechariah's doubt, he would be struck dumb and "not able to speak until the day that these things happen." Consequently, when Zechariah went out to the waiting worshipers, he was unable to pronounce the customary blessing (Luke 1:18-22).

With Elizabeth and Mary 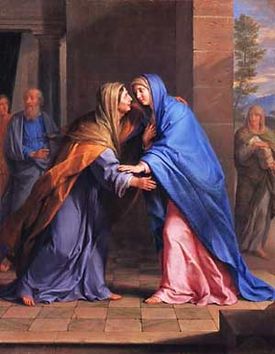 Zechariah returned home to the hill country of Judea, and Elizabeth indeed conceived a son. For five months she remained in seclusion, while Zechariah himself continued to be speechless. In the sixth month, Zechariah and Elizabeth received an unexpected visit from Mary, Elizabeth's cousin. The young woman, who was betrothed to Joseph of Nazareth, remained in Zechariah's home for three months. She then returned, pregnant, to her unsuspecting betrothed husband in Nazareth.

The Magnificat, or "Song of Mary" preserved by Luke indicates her initial joy at her pregnancy:

From now on all generations will call me blessed,

for the Mighty One has done great things for me
Holy is his name…
He has scattered those who are proud in their inmost thoughts.
He has brought down rulers from their thrones but has lifted up the humble.
He has filled the hungry with good things but has sent the rich away empty.
He has helped his servant Israel
remembering to be merciful to Abraham and his descendants forever,

Little is said about the relations among the three residents of Zechariah's house during this period.

The Birth of John

Soon, Zechariah's son was born and eight days later the family gathered for the traditional circumcision ceremony. Elizabeth declared that his name was to be John, but the family objected to this on the grounds that this name had not been used by any of his ancestors. Zechariah, however, confirmed the name by writing on a tablet: "His name is John." Miraculously, he immediately regained the power of speech. Luke preserves Zechariah's ensuing prophecy:

Praise be to the Lord, the God of Israel,

because he has come and has redeemed his people.
He has raised up a horn of salvation for us
in the house of his servant David…
salvation from our enemies

and from the hand of all who hate us… 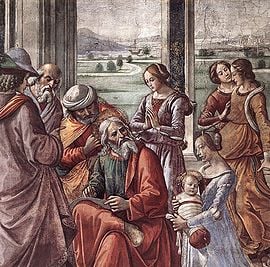 Zechariah confirms, "His name is John."

Some scholars believe this section of Zechariah's prophecy indicates that John the Baptist himself was its subject since Jesus had not yet been born. According to this theory, the Christian movement appropriated traditions about John and subordinated them to Jesus. It is known historically that John the Baptist had a wide following, who continued to honor him even after his death. In any case, the final prophecy of Zechariah makes it clear that John is not the Messiah himself, but his forerunner:

And you, my child, will be called a prophet of the Most High;

for you will go on before the Lord to prepare the way for him,
to give his people the knowledge of salvation
through the forgiveness of their sins,

The child grew up and "became strong in spirit," but nothing more is said of Zechariah.

A good deal of confusion exists about the death of Zechariah. In fact, it is not recorded in the Bible, but a passage referring to another Zechariah has been interpreted as referring to John's father. The Gospel of Matthew quotes Jesus as referring to "Zechariah son of Berekiah," as having been "murdered between the (wall of the) temple and the (courtyard) altar" (Matthew 23:35). The second century apocryphal Infancy Gospel of James apparently identifies this man with Zechariah the father of John, elaborating on the reference by relating a story of Zechariah's death at the hands of agents of Herod the Great, who feared that John, a possible Messiah, might threaten his throne:

Now Herod sought for John… And Herod was wroth and said: "His son is to be king over Israel." …Zacharias [after refusing to divulge John's whereabouts] said: "I am a martyr of God if thou sheddest my blood: For my spirit the Lord shall receive, because thou sheddest innocent blood in the fore-court of the temple of the Lord." And about the dawning of the day Zacharias was slain.

However, this tradition appears to be based on a misunderstanding of Jesus' reference in Matthew. "Zechariah son of Berekiah" is not John's father, but is identified in the Old Testament as none other than the author of the Book of Zechariah who lived during the fifth century B.C.E. (Zech. 1).

To make matters more confusing, Matthew (or possibly Jesus himself) seems confused about the facts of the case of the prophet who was killed in the temple courtyard. According to the Book of Chronicles, it was not Zechariah son of Berekiah that was killed there, but "Zechariah son of Jehoiada the priest" (2 Chronicles 24:20), who was "stoned to death in the courtyard of the Lord's temple" for opposing the king's tolerance of Asherah poles and idol worship.

Zechariah according to esoteric Unification interpretations

According to lesser known teachings of the Unification Church, which does not accept the virgin birth, Zechariah could have been the biological father of Jesus. The angel Gabriel directed Mary to Zechariah's house, and conveyed to her God's instructions regarding relations with Zechariah that would result in the birth of Christ, God's only begotten son. Zechariah, Elizabeth, and Mary subsequently should have protected Jesus, who could have grown up as a child of privilege in their priestly home. However, because circumstances forced Mary from Zechariah's house when she was three months pregnant, for an uncertain future with Joseph, Jesus was exposed to allegations that he was illegitimate. Their estrangement also created distance between Jesus and Elizabeth's son John the Baptist, which later would predispose John to doubt Jesus' ministry (Matt. 11:4-11).

Zechariah is honored as a prophet and a saint in Roman Catholic, Eastern Orthodox, Lutheran, and other Christian traditions. Islam also accepts him as one of the prophets. Unification Tradition honors Zechariah's righteousness and initial faith, but affirms that he failed to fulfill his mission completely, to protect Jesus, and to foster unity between Jesus and John the Baptist.

Retrieved from https://www.newworldencyclopedia.org/p/index.php?title=Zechariah&oldid=980717
Categories:
Hidden category:
This page was last edited on 24 April 2014, at 19:52.
Content is available under Creative Commons Attribution/Share-Alike License; additional terms may apply. See Terms of Use for details.