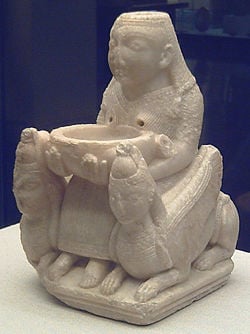 Asherah (Hebrew אשרה), also spelled Ashera, was a major northwest Semitic mother goddess, appearing also in Akkadian sources as Ashratu, in Hittite as Asherdu and in Ugaritic as Athirat. She was the consort of the chief deity El and the mother of 70 other gods.

In the Judeo-Christian tradition Asherah is considered a false Canaanite deity and a major source of temptation to the Israelites. In the Book of Kings, the prophet Elijah challenged 400 prophets of Asherah at the same time that he battled 450 prophets of Baal on Mount Carmel. Other biblical references to "Asherah" refer to a type of sacred pillar or tree that was erected next to Canaanite or Israelite altars in many places. These trees or groves were associated with sacred prostitution of the Canaanite fertility cult.

On the other hand, there is suggestive archaeological evidence that Asherah may also have been regarded as the female consort to the Hebrew God Yahweh and was widely worshiped by Israelites within the context of Yahwism. Thus, she may have functioned as representing the divine feminine. As the Israelite prophets and religious leaders rightly struggled to purge Israel of the licentious rites of Canaanite paganism—in which Asherah played a central role—her healthier function as a carrier of the divine feminine became a casualty.

In the Ugaritic texts (before 1200 B.C.E.) Asherah is sometimes called Athirat yammi, 'Athirat of the Sea'. The sacred sea (or lake) upon which the Ugaritic Asherah stood was known as Yam Kinneret and is now called Lake Galilee. In these texts, Asherah is the consort of the god El. One source refers to the "70 sons of Athirat," presumably the same as the "70 sons of El." She is not clearly distinguished from Ashtart (better known in English as Astarte). Ashtart, however, is clearly linked to the Mesopotamian Goddess Ishtar. Astarte/Ishtar differs from the Ugaritic Asherah, in that Ishtar shares none of Asherah's primary roles as consort of the chief god, mother of the major lesser deities, and goddess of the sea. Asherah is also called Elat (the feminine form of El) and Qodesh or 'Holiness'.

The Hittite version of Asherah is named Asherdu(s) or Asertu(s). She is the consort of Elkunirsa and mother of either 77 or 88 divine sons. In Egypt, beginning in the eighteenth dynasty, a Semitic goddess named Qudshu ('Holiness') begins to appear prominently, equated with the native Egyptian goddess Hathor. A number of scholars believe Qudshu is an Egyptian version of the Ugaritic Asherah-Qodesh. She is pictured standing on a lion and holding two serpents, and one of her names gives her a special quality of mercy. An additional epitaph calls her "The Compassionate One" (Cross, 1973).

In Israel and Judah

Did you know?
Together, El (sometimes Yahweh) and Ashera were viewed as the father and mother of the gods

Asherah is particularly important in the Judeo-Christian tradition, where she is portrayed as a pagan deity whose images and sacred pillars must be rejected and destroyed. However, there is evidence that in the early history of Israel, she may have been seen not only as the consort of El but also as the wife of the Israelite God Yahweh. El was recognized by the Canaanites as the supreme deity and by the Israelites as synonymous with Yahweh (Dever 2005).

In a 1975 excavation at Kuntillet 'Ajrud (Horvat Teman) in the Sinai Desert, a pottery ostracon was inscribed "Berakhti et’khem l’YHVH Shomron ul’Asherato" ("I have blessed you by Yahweh of Samaria and [his] Asherah"). Beneath the words are drawings of a tree and of a cow with a calf. Nearby is a drawing of a "tree of life" flanked by two ibexes. A second reference to "YHVH and [his] Asherah" was identified in an inscription on a building wall. An similar reference has been found at Khirbet el-Qom, near Hebron, where an inscription reads "Blessed be Uriyahu by Yahweh and by his Asherah; from his enemies he saved him!"

However, scholars are divided over how significant Asherah was in Canaanite and Israelite culture. Although she clearly had her own ancient identity, just as did El, she seems to have been gradually eclipsed, just as El merged with Yahweh in Israelite culture and was replaced in importance by Baal in Canaanite culture. Goddesses such as Astarte and Anat eventually overshadowed Asherah, as time went on.

The issue is complicated by the fact that in Hebrew, the word Asherah is masculine, and biblical passages normally use Asherah to refer to the sacred pillar or tree that was often erected next to altars belonging to El, Baal, or even Yahweh. An asherah of this type stood for many years in the Temple of Jerusalem itself, and sacred pillars were also erected in earlier times by the greatest Hebrew patriarchs and prophets, including Jacob at Bethel (Genesis 28:18), and Moses at the foot of Mount Sinai (Exodus 24:4), and Joshua at Shechem (Josh. 24:26). While this seems to have been common practice at one time, it was denounced by later prophets and historians. Thus we find references such as:

On the other hand, the prophet Elijah fought not only against prophets of Baal, but also against "prophets of Asherah," indicating that the term could also be applied to an actual goddess as well as to a generic object of worship:

The veneration of Asherah or asherah poles seems to have been fairly widespread in ancient Israel and Judah, and sometimes it was officially sanctioned. The Bible reports that during the days of King Josiah (sixth century B.C.E.), the king "tore down the quarters of the male shrine prostitutes, which were in the temple of the Lord and where women did weaving for Asherah." (2 Kings 23:7)

The Bible is also ripe with references to the Israelites committing sexual immorality with Canaanite deities at high places and sacred groves. Often this is a metaphor for Israel's faithlessness to Yahweh as her spouse, but in some cases the references are quite direct, such as:

"They sacrifice on the mountaintops and burn offerings on the hills, under oak, poplar and terebinth, where the shade is pleasant. Therefore your daughters turn to prostitution and your daughters-in-law to adultery."—Hosea 4:13

This has led many to conclude that the worship of Asherah involved licentious rites. While this may result in part from the polemics of Israelite priests and prophets against rival religious sects, it is also true that sacred prostitution was a well established tradition in ancient Mesopotamia. The goddess Ishtar was particularly well known for this practice. The story of the tribal patriarch Judah, who engaged in sex with his daughter-in-law Tamar while she was disguised as a sacred prostitute, indicates that such practices were known in Canaan as well. These priestesses were believed to bring blessing and fertility to the land as they reenacted the hieros gamos—the sacred marriage of heaven and earth. The function of sacred male prostitutes is less certain. They may have played the role of the male deity in a similar drama.

Whether or not Israelite Asherah worship involved sacred prostitution, it is clear that one or more female goddesses was widely worshiped in both Israel and Judah. Archaeological digs commonly uncover statuettes of a goddess, not only in temples and public buildings, but in many private homes. In most cases, her exact identity is difficult to determine (Dever 2005).

The prophet Jeremiah vehemently opposed the worship of the goddess he called the "Queen of Heaven":

The children gather wood, the fathers light the fire, and the women knead the dough and make cakes of bread for the Queen of Heaven. They pour out drink offerings to other gods to provoke me to anger. But am I the one they are provoking? declares the Lord. Are they not rather harming themselves, to their own shame?—Jeremiah 7:18-19

A possible echo of earlier worship of an Israelite version of Asherah as the goddess of the deep may be preserved in Jacob's blessing to his sons in Genesis 49:25, which speaks of:

Asherah and the Divine Feminine

Feminist theologians and some archaeologists hold that the denigration of Asherah in the Judeo-Christian tradition resulted from the male-dominated religious establishment's repression of feminine depictions of the Divine. Whether as Asherah, Astarte, or any other name, feminine manifestations of the godhead were systematically and sometimes violently opposed by the religious authorities of the Kingdom of Judah and its Temple. The northern Kingdom of Israel was more tolerant of religious pluralism, for which it was strongly condemned by the biblical writers. Later prophets allowed that God had a compassionate, motherly quality, as well as a stern fatherly character, but any question of God's basic gender had already been resolved: God was male, priests were men, and the women were not sources of fertility, but passive vessels for the seed of men.

This thesis, however, may presume a modern sensibility of the unity of the Godhead that did not exist in an ancient world, where polytheism was the norm. Israelites who worshiped Asherah alongside Yahweh would have had a polytheistic concept of both, and it was polytheism that the priests of Israel steadfastly opposed. Furthermore, the notion that Yahweh has a masculine gender contradicts the high biblical doctrine that God is ultimately beyond any depiction in human terms. If one takes the Bible at face value, Yahwistic opposition to Asherah was of a piece with its opposition to Baal (a male deity) and all gods other than Yahweh. The prohibition of images in the Ten Commandments applied equally to masculine representations of God as it does to feminine.

Nevertheless, the representations of the divine feminine that continue to surface in the archaeology of ancient Israel give weight to the assertion that the popular religion of that period, if not the official creed of Jerusalem, viewed God as containing both masculine and feminine aspects. Anthropologist Raphael Patai in his book The Hebrew Goddess (1967, 1990) identified as goddesses: Asherah, Anat, Astarte, the cherubim in Solomon's Temple, and in later talmudic and kabbalistic Judaism, the Sabbath personified as Bride, and the Shekhina as the indwelling feminine presence of God. In Christianity, some believe that Mary, the "Mother of God," likewise takes on the role of a mother goddess, as does the Holy Spirit in its role as "comforter."