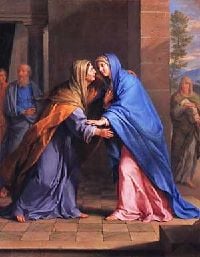 Elizabeth, also spelled Elisabeth (Hebrew Elisheva, אֱלִישֶׁבַע—"An oath to my God") was the mother of John the Baptist and the wife of Zechariah, according to the Gospel of Luke. A righteous woman of a priestly lineage, she conceived her son miraculously as an old woman, after her husband received a revelation while serving at the Temple of Jerusalem. During her pregnancy, she and Zechariah provided hospitality to Mary, the mother of Jesus, who visited the couple immediately after receiving her own revelation that she, too, would miraculously conceive a son. Elizabeth acted prophetically in greeting Mary by sensing that her young cousin would be "the mother of my Lord."

In Christian tradition, Elizabeth is revered as a saint. Modern scholarship questions the historicity of Elizabeth's relationship to Mary, asserting that the New Testament appropriated a once independent source about John the Baptist's family. Unificationism has a unique take on Elizabeth, seeing Elizabeth and Mary as standing in the position of elder sister and younger sister, attempting to restore the situation of Jacob's wives, Leah and Rachel.

According to Luke 1:36, Elizabeth was related to Mary. The word used in the Greek original to describe their kinship is suggenes, a blood relative. Traditionally, they are believed to have been cousins. St. Hippolytus of Rome affirmed that Mary's mother (Saint Anne) and Elizabeth's mother (Sobe) were sisters.[1]

Luke reports that Elizabeth was a descendant of Aaron the priest (Luke 1:5). She and her husband Zechariah were "righteous before God, living blamelessly" (1:6). Like several other providential women in the Bible, Elizabeth was barren. Luke mentions that she was also old, being "far advanced in years."

Zechariah, having been chosen by lot for the honor to minister at the altar of incense in the Temple of Jerusalem was visited by the Angel Gabriel, who told him that Elizabeth would have a son who "will be great in the sight of the Lord" (1:15) and would be inspired by the "spirit and power of Elijah." Zechariah expressed doubts that such a thing could be possible, because, "I am an old man and my wife is well along in years." Gabriel caused him to lose the power of speech because of his doubt.

Nevertheless, after Zechariah returned to their home in the hill country of Judea, both he and Elizabeth proved equal to the task. Overjoyed, Elizabeth declared, "The Lord has done this for me. In these days he has shown his favor and taken away my disgrace among the people." To ensure the success of her pregnancy, she secluded herself for five months.

In the sixth month, however, Elizabeth received an unexpected visit from of her young cousin, Mary (1:39). Gabriel had visited Mary in Nazareth and informed that she, too, would conceive a son, even though she had not yet "known a man." (1:34) Asked how such a thing could happen, he informed Mary of Elizabeth's own miraculous pregnancy. Mary immediately left Nazareth for the hill country in response. The visit had a powerful effect on Elizabeth, as her fetus became agitated, and she prophesied:

Blessed are you among women and blessed is the fruit of your womb. But why am I so favored, that the mother of my Lord should come to me? (1:41-43)

Elizabeth and Zechariah then provided hospitality to Mary for three months, but as the time for Elizabeth to give birth neared, Mary returned to Nazareth.

The birth of John

After this, Elizabeth gave birth to a son, and when the extended family, not including Mary, gathered for his circumcision eight days later, she named him John. The relatives protested on the grounds that none of the child's ancestors had been so named. At this point Zechariah confirmed the name through the use of a writing tablet, and his power of speech miraculously returned. He too then prophesied, predicting:

You, my child, will be called a prophet of the Most High; for you will go on before the Lord to prepare the way for him, to give his people the knowledge of salvation through the forgiveness of their sins. (Luke 1:76-77)

John would indeed go on to be a famous prophet in Christian tradition, being the forerunner of Jesus who baptized many thousands at the Jordan River and testified to Jesus as the son of God. Outside of the New Testament, John is mentioned in the works of the historian Josephus. Luke reports John's reputation to be so great that, "The people were waiting expectantly and were all wondering in their hearts if John might possibly be the Christ. (3:15)

Outside of the Bible 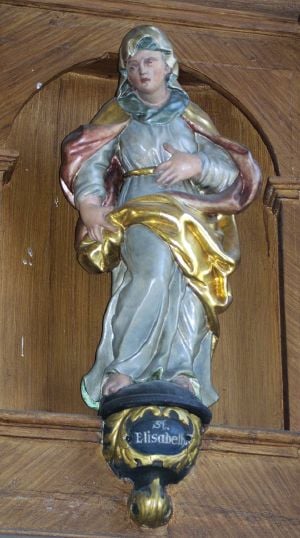 In this account Elizabeth's husband Zechariah is identified (erroneously) as the "high priest," and thus ministers regularly in the Temple of Jerusalem. Also, Mary is said to be unaware of Gabriel's annunciation of her coming pregnancy, having "forgetten" it; and she answers Elizabeth's greeting by saying, "Who am I, O Lord, that all the generations of the earth should bless me?" Later, Elizabeth hides her infant son John from the agents of Herod the Great, who seek not only to kill Jesus but John as well. Unable to find a suitable hiding place, she cries out to God, who opens a cleft in a mountain where she and John hide, watched over by an angel. Zechariah, however, is soon killed by Herod's agents when he refuses to divulge the hiding place.

Elizabeth is revered as a saint in the Catholic, Orthodox and Anglican traditions. Her feast is celebrated on September 8 by the Greeks, and November 5 by the Catholics.

While the Infancy Gospel of James was never accepted into the New Testament Canon but also never condemned as heretical, other aprocryphal sources for Elizabeth were specifically rejected because of their association with the heresy of Gnosticism.

In the Valentinian gnostic work Pistis Sophia, the pre-existent Christ inseminates Elizabeth with a "power" that, bound together with the soul of Elijah, manifests in John the Baptist:

I looked down on the world of mankind, by command of the First Mystery. I found Elizabeth, the mother of John the Baptizer, before she had conceived him, and I sowed into her a power which I had received from the little Iaō, the Good, who is in the Midst, that he might be able to make proclamation before me and make ready my way, and baptize with the water of the forgiveness of sins. That power then is in the body of John... So the power of the little Iaō, who is in the Midst, and the soul of the prophet Elias, they were bound into the body of John the Baptizer. (11:7)

In the Mandaean Gospel of John the Baptizer, Elizabeth is called Enishbai. Because the Mandaeans[2] hold John and not Jesus to be the true teacher, she is more important than Mary, who is mentioned but briefly. In this source we learn that Elizabeth was 88 years old when she gave birth to John:

"My father," says Yahyā (John), "was ninety and nine and my mother eighty and eight years old. Out of the basin of Jordan they took me. They bore me up and laid me in the womb of Enishbai. 'Nine months,' said they, 'thou shalt stay in her womb, as do all other children.' No wise woman," said he, "brought me into the world in Judæa, and they have not cut my cord in Jerusalem. They made for me no picture of lies, and for me hung up no bell of deceit. I was born from Enishbai in the region of Jerusalem."

Later in the story, we are told that both Zechariah and Elizabeth survived until after John began his public ministry. Having been long separated from her son, Elizabeth rushed out of her home with her veil to meet John, for which Zechariah planned to divorce her:

Modern criticism takes various views toward Elizabeth. Some see her as a fictional character, while others ascribe to her a greater role, at least as a speaker, than that given by Luke. One theory holds that the stories of Elizabeth and Zechariah were once part of a non-Christian tradition centering on John the Baptist, who was thought by many to be a messianic figure in his own right.

In this view, the Gospel writers go to some length to present John as subordinate to Jesus.[3] Thus, when John baptizes Jesus, this does not signify—as one might expect—that Jesus needed to be cleansed of sin or that he had become a disciple of John. John makes it clear that he himself is neither Elijah nor the Messiah (John 1:20-21), and he protests that it should be Jesus that baptizes him (Mt. 3:14). Likewise, when the miraculously pregnant Elizabeth receives a visit from Mary, Elizabeth greets her with with great honor, even though Mary is much younger that she. Some have suggested that the Magnificat of Mary, recited in response to Elizabeth's greeting, orginally belonged to Elizabeth herself, for it echoes the prophecy uttered by her husband Zechariah at John's birth, and is utterly devoid of Christian theology:

My soul glorifies the Lord and my spirit rejoices in God my Savior,
for he has been mindful of the humble state of his servant.
From now on all generations will call me blessed,
for the Mighty One has done great things for me—holy is his name.
His mercy extends to those who fear him,
from generation to generation.
He has performed mighty deeds with his arm;
he has scattered those who are proud in their inmost thoughts.
He has brought down rulers from their thrones but has lifted up the humble.
He has filled the hungry with good things but has sent the rich away empty.
He has helped his servant Israel, remembering to be merciful
to Abraham and his descendants forever, even as he said to our fathers. (Luke 1:46-55)

In Unificationist tradition, Elizabeth plays an important role as Mary's counterpart. She stands in the same postion as Jacob's wife Leah, while Mary is in the position of Rachel. Elizabeth's responsibility was to foster unity between herself and Mary, and to encourage her husband, Zechariah, to protect Mary and her unborn child. When Mary left Zechariah's house just prior to Elizabeth's giving birth, the relationship between herself and Elizabeth had soured, causing serious complications for Jesus' mission, including creating distance between Jesus and Elizabeth's son John the Baptist.