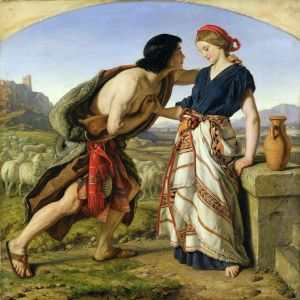 Rachel greeted by her cousin Jacob

Rachel (Hebrew: רחל, "Ewe"—also spelled Rachael) was the younger and favorite wife of Jacob, sister of Leah and mother of Joseph and Benjamin. Her story is told in the Book of Genesis in the Hebrew Bible.

A native of Haran, and the younger daughter of Jacob's uncle Laban, Rachel had been engaged to marry Jacob after he arrived from Canaan, having fled from the wrath of his brother Esau. Laban, however, deceptively arranged for her older sister, Leah, to be Jacob's bride, by disguising Leah and sending her to Jacob's tent on the wedding night. Rachel became Jacob's second wife a week later, after Jacob agreed to work for him an additional seven years. Although she was loved by him more than Leah was, Rachel suffered for several years without children, while Leah proved the more fertile of the two sisters. To compensate for this, Rachel gave her servant, Bilhah, to Jacob as a concubine and adopted Bilhah's children, Dan and Naphthali. Later, Rachel bore Jacob her own natural son, Joseph.

While leaving with Jacob's clan for Canaan, Rachel stole Laban's household idols and, at the risk of her life, successfully hid them from him when he came looking for them. Settling with her husband and family in Bethel, Rachel became pregnant again but died while giving birth to Benjamin, the last of Jacob's 12 sons. She is the foremother of King Saul, the first king of Israel, as well as several important priests and prophets, as well as the Christian apostle, Paul of Tarsus. Rachel and Jacob at the Well by James Tissot (c. 1896–1902)
Did you know?
Rachel was the favorite wife of Jacob, younger sister of Leah his first wife, and mother of his favorite sons Joseph and Benjamin

In the Biblical account, Rachel first appears when she meets Jacob at a well used to water the local flocks, where she is tending her father's sheep. He assists her by rolling a stone away from the mouth of the well and, being her close kinsman, kisses her and begins to weep. Jacob has come to Haran from Canaan in order to avoid being killed by his brother Esau, and also to find a wife. Rachel immediately informs her father of his arrival.

Welcomed by Rachel's father, Laban, Jacob spends the month working with the family, after which Laban invites him to negotiate over the question of his wages. Here, Rachel is described as "lovely in form, and beautiful," and we are told that "Jacob was in love with Rachel" (Gen. 29:17-18).

Jacob offers to work for Laban for seven years in exchange for the right to marry Rachel. After the seven years are over, Laban hosts a wedding feast in Jacob's honor, but switches Rachel for Leah—probably through the ruse of a veil—and it is thus Leah who spends the wedding night with Jacob. Laban justifies himself on the grounds that it is uncustomary to give the younger daughter in marriage before the older one. He offers to give Rachel to Jacob as a second wife in return for another seven years of work, saying "Finish this daughter’s bridal week; then we will give you the younger one also, in return for another seven years of work" (Gen. 29:16-30). Jacob accepts, spending the week with Leah exclusively and then marrying Rachel as well. Along with each daughter, Laban also sent two handmaids as their servants.

Jacob loves Rachel more than he loves Leah. However, like several other providential women of the Bible, including Jacob's own mother Rebekah, Rachel remains childless for many years. On the other hand, God sympathizes with Leah and gives her four sons in quick succession. These are Reuben, Simeon, Levi, and Judah (Gen. 29:31-35).

Rachel, seeing that she is still unable to conceive, offers her handmaid Bilhah as a concubine to Jacob. Rachel claims Bilhah's sons as her own, saying of Dan (whose name means "vindication"): "God has vindicated me; he has listened to my plea and given me a son." On the birth of Napthali ("my struggle"), she declares: "I have had a great struggle with my sister, and I have won" (Gen. 30:4-7). Leah responds by offering her handmaid Zilpah as a fourth wife to Jacob. She names and raises the two sons—Gad and Asher that Zilpah bears.

The text relates a poignant story demonstrating the tension between Jacob's two primary wives, as well as Rachel's sense of urgency over her apparent infertility. Leah's firstborn, Reuben, returns one day from the field with mandrakes for his mother. Rachel, believing the roots will solve her infertility problem, asks for some of the mandrakes. Leah responds angrily: "Wasn't it enough that you took away my husband? Will you take my son's mandrakes too?" (Gen. 30:15). Rachel offers to trade her scheduled night with their husband in return for the plants. Leah agrees, and, ironically, that night she conceives Issachar, and later gives birth to Zebulun. Finally, after six males, Leah finally gives birth to a daughter, Dinah.

After this, at long last, God "remembers" Rachel and gives her a son of her own, Joseph. At his birth, Rachel declares: "God has taken away my disgrace."

During all this time, about 14 years, Rachel and her family still lived on Laban's land. Even after this, Laban still insisted on another seven years labor from him. During this time Rachel's husband became a wealthy man, amassing large flocks of sheep and goats. In the twenty-first year, however, God called Jacob to return to Canaan.

Jacob sends for Rachel and Leah and shared God's revelation with them. He describes God as telling him, "I am the God of Bethel, where you anointed a pillar and where you made a vow to me. Now leave this land at once and go back to your native land" (Gen. 31:12-13). Jacob instructs the women to get ready to depart immediately, knowing that Laban would accuse him of theft and breaking their agreement. Rachel and Leah willingly unite with Jacob's plan, saying:

Do we still have any share in the inheritance of our father's estate? Does he not regard us as foreigners? Not only has he sold us, but he has used up what was paid for us. Surely all the wealth that God took away from our father belongs to us and our children. So do whatever God has told you. (Gen. 31:14-15)

While Jacob and the clan prepare for the journey, Rachel makes her way to Laban's house and steals his valuable household gods before leaving. Laban, busy shearing his sheep, does not realize that the large caravan had departed for three days, by which time Jacob's group has crossed the Euphrates and is well on its way toward Canaan. Laban did not overtake them until they reached the hill country of Gilead, to the east of the Jordan River.

God reportedly speaks to Laban and warns him not to harm Jacob. However, a tense drama unfolds with regard to Rachel, as Jacob, unaware of the theft, invites Laban to search for his precious idols, saying: "if you find anyone who has your gods, he shall not live." Laban searches the camp thoroughly, going from one tent to another, and finally comes to Rachel, who has hidden the sacred items in her camel's saddle. Rachel sits passively on the saddle as Laban searches through everything in the tent. In a final act of deception, harkening back to Laban's own ruse of sending Leah to the wedding tent in Rachel's place, she declares: "Don't be angry, my lord, that I cannot stand up in your presence, for the manner of women is upon me" (Gen. 31:35).

Thus defeated, Laban offers a covenant of peace between himself and Jacob. Jacob agrees, saying: "May the God of Abraham and the God of Nahor, the God of their father, judge between us." Jacob sets up a sacred pillar to commemorate the meeting and mark a boundary between his lands and Laban's. They then share a sacrificial feast. Rachel and her one natural son, Joseph, then kiss Laban goodbye for the last time.

Rachel and Joseph traveled in the place of highest honor and protection in Jacob's caravan when he crossed the Jordan and re-united with Esau, being in the rear where they were the least likely to be harmed by Esau's threatening forces.

Jacob and his family settled at Bethel. On the way, Jacob instructed his household to get rid of any "foreign god" they had with them. Although the gods Rachel brought with her from Laban's house are not mentioned, the text states that "they gave Jacob all the foreign gods they had and the rings in their ears, and Jacob buried them under the oak at Shechem."[1] Rachel became pregnant again, and was nearing the time of delivery when the family traveled to a new place of settlement at Ephrath, known in the future as Bethlehem. Rachel went into an exceeding difficult labor on the road and there gave birth to her second son, naming him Ben-Oni, meaning "son of my trouble" (Gen. 35:18). He is better known by the name given him by Jacob, Benjamin, meaning "son of my right hand." Rachel died soon after delivering this son, traditionally on the eleventh day of the Hebrew month of Heshvan,[2] and was buried by Jacob on the road to Efrat, just outside Bethlehem.[3] Today Rachel's tomb, located between Bethlehem and the Jerusalem neighborhood of Gilo, is visited by thousands of visitors each year.[4]

Rachel's son Joseph was destined as Jacob's favorite son and to be the leader of Israel's tribes between exile and nationhood. One important Jewish tradition affirms the coming of a Mashiach ben Yosef (Messiah, son of Joseph), who will fight the apocalyptic Wars of Gog and Magog, preparing the way for the kingship messiah, son of David and the messianic age.[5]

Rachel is also the foremother of Israel's first king, Saul, as well as the high priest Eli of Shiloh, and Saul's namesake, the Benjaminite Saul/Paul of Tarsus, the greatest of the early Christian preachers.

According to Genesis 46, Rachel had 14 sons and grandsons, not counting her adopted sons Dan and Napthali, or their children. They include: Joseph and Benjamin; Joseph's sons Manasseh and Ephraim; and Benjamin's sons Bela, Beker, Ashbel, Gera, Naaman, Ehi, Rosh, Muppim, Huppim and Ard.

In Jeremiah 31:15, the prophet speaks of "Rachel weeping for her children." This is interpreted in Judaism as Rachel crying over her descendants' sufferings in exile following the destruction of the First Temple in ancient Jerusalem. According to one rabbinical tradition, Rachel spoke before God:

If I, a mere mortal, was not prepared to humiliate my sister and was willing to take a rival into my home, how could You, the eternal, compassionate God, be jealous of idols, which have no true existence, that were brought into Your home (the Temple in Jerusalem)? Will You cause my children to be exiled on this account?

God accepted her plea and promised that, eventually, the exile would end and the Jews would return to their land.[6]

In the second chapter of the Christian Gospel of Matthew, this reference from Jeremiah is interpreted as a prediction of the Massacre of the Innocents by Herod the Great in his attempt to kill the young Jesus.