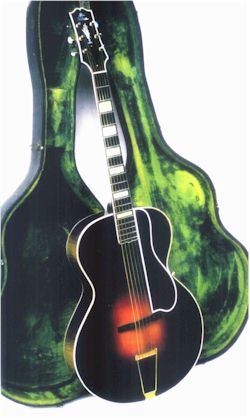 Eddie Lang (October 25, 1902 – March 26, 1933) was an American jazz guitarist, generally considered to be the finest of his era and the historical pioneer of that instrument.

Eddie Lang was the first major jazz guitar soloist (together with blues guitar player Lonnie Johnson with whom he recorded). Lang was a virtuoso and at the same time an incomparable rhythmic accompanist. His career is forever linked to that of legendary cornet player Bix Beiderbecke and many other early jazz greats. Lang excelled rhythmically, melodically, and harmonically. He repeatedly transcended the racial barriers of the time by recording with African-American musicians. Lang’s legacy would exert a considerable influence on future jazz guitar greats like Django Reinhardt and Charlie Christian.

Lang was born Salvatore Massaro, the son of an Italian-American instrument maker in Philadelphia, Pennsylvania. At first, he took violin lessons for 11 years. In school he became friends with Joe Venuti, with whom he would work for much of his career. He was playing professionally by about 1918, playing violin, banjo, and guitar. He worked with various bands in the USA's north-east, including the Mound City Blue Blowers. He later worked in London (late 1924 to early 1925), and then settled in New York City.

He played with the bands of Venuti, Adrian Rollini, Roger Wolfe Kahn, and Jean Goldkette in addition to doing a large amount of freelance radio and recording work. Due to his versatility and his immense talent, Lang was in constant demand and made hundreds upon hundreds of recordings in various styles. He was the man to have on guitar.

In 1929 he joined Paul Whiteman's Orchestra, and can be seen and heard in the movie The King of Jazz. When Bing Crosby left Whiteman, Lang went with Bing as his accompanist and can be seen with him in the 1932 movie Big Broadcast.

Like many of his colleagues, Eddie Lang died at a tragically premature age. In his case, it was from a sudden hemorrhage following a poorly performed tonsillectomy in New York City. According to jazz historian, musician and curator Vince Giordano, the death was due to the fact that Lang and the doctor who performed the tonsillectomy got drunk together.

Eddie Lang was a virtuoso of his instrument, capable of mixing complex rhythmic patters and equally complex chords with subtle one-note melodies. Like all jazz masters, he had his unique sound. Compared to that of later players using an electrically amplified guitar (e.g., Charlie Christian), Lang’s sound was thin and crisp. It often had a softly tense quality, though never stiff. Rather than playing in a relaxed mode, slightly after the beat, Lang would attack each note very early on in a special dynamic way.

His single-note solos were filled with restrained emotion and some melancholy, occasionally reminiscent of Italian folk music. More generally, his music could be very close to European classical music—a genre he practiced as well as the blues. The former he mostly practiced with the friend Joe Venuti on violin and Frank Signorelli or Arthur Schutt on piano. The latter, he practiced with various African-American musicians, including Bessie Smith, the empress of the blues, Joe King Oliver, and fellow guitarist Lonnie Johnson.

Lang participated in a number of masterpieces along with cornetist Bix Beiderbecke and c-melody saxophone player Frankie Trumbauer, most notably the famous “Singin’ the Blues” (1927).

In 1929, Eddie Lang recorded a number of guitar duos with blues and jazz guitarist Lonnie Johnson. The harmony between the two players, who composed most of the pieces together, produced some of the most wonderful guitar music ever played, including “Guitar Blues, “Blue Room” and “Hot Fingers.” In these, Johnson can be mostly heard improvising with his typical volubility while Lang mostly remains in the background, offering rhythmic and melodic support. For these recordings, Eddie Lang used the pseudonym of “Blind Willie Dunn” (“blind” was a typical component for the names of African-American blues singers). On some of these dates, the great cornetist King Joe Oliver can also be heard.

The roles are reversed in Lang’s 1932 guitar duos with Carl Kress. Kress, whose harmonies were even more elaborated than Lang’s, mostly plays chords, while Lang improvises beautiful melodies. The atmosphere of these recordings is very different. The performances have a distinctly classical European flavor.

Lang’s duos with violinist Joe Venuti have a very similar atmosphere. Most famous is “Stringing the Blues” (1926).

Retrieved from https://www.newworldencyclopedia.org/p/index.php?title=Eddie_Lang&oldid=1006931
Categories:
Hidden category:
This page was last edited on 25 September 2017, at 22:09.
Content is available under Creative Commons Attribution/Share-Alike License; additional terms may apply. See Terms of Use for details.