Eddie Cantor (January 31, 1892 – October 10, 1964) was an American comedian, singer, actor, and songwriter. Known to Broadway, radio and early television audiences as Banjo Eyes, he was regarded almost as a family member by millions because his top-rated radio shows revealed intimate stories and amusing antics about his family.

Cantor dedicated much of his life for caring for others needs. He participated in a Broadway strike for better treatment of Broadway actors and later served as the first president of the Screen Actors Guild. He was supportive of new talent and is responsible for launching the careers of stars such as Dinah Shore, Deanna Durbin, and Sammy Davis Jr. During World War II he worked in a United Services Organization troupe and helped President Franklin Roosevelt create the March of Dimes.

Cantor was born Israel Iskowitz in New York City, the son of Russian-Jewish immigrants, Meta and Mechel Iskowitz. His mother died of lung cancer two years after his birth, and his father was unable to care for him. He lived with his maternal grandmother, Esther Kantrowitz in a small basement apartment. A misunderstanding when signing up her grandson for school gave him her last name of Kantrowitz (later shortened to "Cantor") instead of Iskowitz. He adopted the first name Eddie when he met his future wife, Ida Tobias, in 1903. The two married in 1914 and remained together until Ida died in 1962. Eddie and Ida Cantor had five daughters: Marilyn, Marjorie, Natalie, Edna, and Janet.

His talent as entertainer began to emerge and develop by singing in the streets, juggling, and anything else Cantor could do to raise attention. Cantor soon began winning talent contests at local theaters and started appearing on stage during his teenage years. One of his earliest paying jobs was doubling as a waiter and performer, singing for tips at Carey Walsh's Coney Island saloon with a young Jimmy Durante accompanying him on piano.

In 1907, Cantor became a billed name in vaudeville. In 1912 he was the only performer over the age of 20 to appear in Gus Edwards' Kid Kabaret, where he created his first blackface character, Jefferson. Critical praise from that show got the attention of Broadway's top producer, Florenz Ziegfeld, who gave Cantor a spot in the Ziegfeld rooftop post-show, Midnight Frolic in 1916.

Cantor made his Broadway debut in the Ziegfeld Follies of 1917. He continued in the Ziegfeld Follies until 1927, a period considered the best years of the long-running revue. For several years Cantor co-starred in an act with pioneer African-American comedian Bert Williams, both appearing in blackface; Cantor played Williams's fresh-talking son. Other co-stars with Cantor during his time in the Follies included Will Rogers, Marilyn Miller, and W. C. Fields. He moved on to stardom in book musicals, starting with Kid Boots, Whoopee! and Banjo Eyes.

Cantor began making phonograph records in 1917, recording both comedy songs and routines and popular songs of the day, first for the Victor Talking Machine Company, then for Aeoleon-Vocalion, Pathé and Emerson Records. From 1921 through 1925 he had an exclusive contract with Columbia Records, returning to Victor for the remainder of the decade.

Cantor was one of the era's most successful entertainers, but the 1929 stock market crash took away his multi-millionaire status and left him deeply in debt. However, Cantor's relentless attention to his own earnings in order to avoid the poverty he knew as a child caused him to search quickly for more work, quickly building a new bank account with his highly popular, bestselling book of humor and cartoons about his experience, Caught Short! A Saga of Wailing Wall Street in "1929 A.C. (After Crash)." His hard work and determination allowed the book to published in the closing weeks of 1929, less than two months following the stock market crash.[1]

The royalties from the book helped and Cantor managed to bounce back from financial ruin in movies and on radio. Cantor had previously appeared in a number of short films and two features in the 1920s, and was offered the starring role in The Jazz Singer when that role was turned down by George Jessel, Cantor also turned it down, so it went to Al Jolson. That decision didn't impact his career as he became a leading Hollywood star in 1930 with the film version of Whoopee!. Over the next two decades, he continued making films until 1948, including Roman Scandals, Ali Baba Goes to Town and If You Knew Susie. 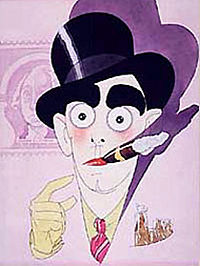 One of 12 Eddie Cantor caricatures by Frederick J. Garner for a 1933 Brown & Bigelow advertising card set. The Cantor cards were purchased in bulk as a direct-mail item by such businesses as auto body shops, funeral directors, dental laboratories and vegetable wholesale dealers. These businesses then mailed a single Cantor card each month for a year to their selected special customers.

Cantor's debut initial radio appearance was with Rudy Vallee's The Fleischmann's Yeast Hour on February 5, 1931, and it led to a four-week tryout with NBC's The Chase and Sanborn Hour. Replacing Maurice Chevalier, who was returning to Paris, Cantor joined The Chase and Sanborn Hour on September 13, 1931. This hour-long Sunday evening variety series teamed Cantor with announcer Jimmy Wallington and violinist Dave Rubinoff. The show established Cantor as a leading comedian, and his scriptwriter, David Freedman, as "the Captain of Comedy." Soon afterward, Cantor became the world's highest–paid radio star. His shows began with a crowd chanting, "We want Can-tor, We want Can-tor," a phrase said to have originated when a vaudeville audience chanted to chase off an opening act on the bill before Cantor. Cantor's theme song was the 1903 pop tune Ida, Sweet as Apple Cider, which he always dedicated to his wife.

Indicative of his effect on the mass audience, he agreed in November of 1934 to introduce a new song by the songwriters J. Fred Coots and Haven Gillespie that other well-known artists had rejected as being "silly" and "childish." The song, Santa Claus Is Coming to Town, had immediate orders for 100,000 copies of sheet music the next day. It sold 400,000 copies by Christmas of that year.

In the 1940s his NBC national radio show was Time to Smile. In addition to film and radio, Cantor recorded for Hit of the Week Records, then again for Columbia, for Banner and Decca and various small labels.

He was considered a founder of the March of Dimes, and did much to publicize the battle against polio. Cantor also served as first president of the Screen Actors Guild. His heavy political involvement began early in his career, including his quick rush to strike with Actors Equity in 1919, against the advice of father figure and producer, Florenz Ziegfeld.

Cantor's career declined somewhat in the late 1930s due to his public denunciations of Adolf Hitler and Fascism. Wishing to distance themselves from any political controversy, many sponsors dropped Cantor's shows. However, his popularity bounced back with the United States entry into World War II.

In the 1950s, he was one of the alternating hosts of the television show The Colgate Comedy Hour, in which he would introduce variety acts and play comic characters like "Maxie the Taxi." However, the show landed Cantor in an unlikely controversy when a young Sammy Davis, Jr. appeared as a guest performer. Cantor embraced Davis and mopped Davis's brow with his handkerchief after his performance. Worried sponsors led NBC to threaten cancellation of the show; other sources claim that NBC threatened to cancel the show when Davis was booked for two weeks straight. Cantor's response to the controversy was to book Davis for the rest of the season.

Cantor wrote or co-wrote at least seven other books in addition to Caught Short!, including booklets released by the then-fledgling publishing company of Simon & Schuster, with Cantor’s name on the cover. Some were "as told to" or written with David Freedman. Customers paid a dollar and received the booklet with a penny embedded in the hardcover. They sold well, and H. L. Mencken asserted that these books did more to pull America out of the Great Depression than all government measures combined.

On October 10, 1964, in Beverly Hills, California, Eddie Cantor suffered a heart attack and died. He is buried in Hillside Memorial Park Cemetery. Cantor was awarded an honorary Academy Award the year of his death. He was 72 years old.

Cantor's daughter, Janet Gari, is a songwriter who has collaborated with Toby Garson, the daughter of composer Harry Ruby, on children's shows and off-Broadway revues. Cantor’s autobiographies, My Life is in Your Hands (with David Freedman) and Take My Life (with Jane Kesner Ardmore) were republished in 2000, thanks to the dedicated efforts of Cantor’s grandson, musician Brian Gari.

In 1964, Eddie received a Presidential Commendation from Lyndon B. Johnson for his devotion to "humanitarian causes of every description." Even though Cantor was a popular icon of his time he always was gracious and respectful to his fans. Cantor is quoted as saying "Slow down and enjoy life. It's not only the scenery you miss by going too fast, you also miss the sense of where you are going and why."[2]