James Francis Durante, better known as Jimmy Durante or Schnozzle (Snozzle) Durante (February 10, 1893 – January 29, 1980), was an American singer, pianist, comedian, and actor, whose distinctive gravel delivery, comic language butchery, jazz-influenced songs, and large nose—his frequent jokes about it included a frequent self-reference that became his nickname: "Schnozzola"—helped make him one of America's most familiar and popular personalities of the 1920s through the 1970s. He was also one of the most beloved people within the entertainment industry. An associate once remarked of Durante, "You could warm your hands on this man."

Durante was born in New York City, the third of four children born to Mitch and Margaret Durante. A product of working-class New York, Durante dropped out of school in the eighth grade to become a full-time ragtime pianist, working the city circuit and earning the nickname "Ragtime Jimmy," before he joined one of the first recognizable jazz bands in New York, the Original New Orleans Jazz Band. Durante was the only member of the group who did not hail from New Orleans. His routine of breaking into a song to deliver a joke, with band or orchestra chord punctuation after each line became a Durante trademark. In 1920, the group was renamed Jimmy Durante's Jazz Band.

Durante became a vaudeville star and radio attraction by the mid-1920s, with a music and comedy trio called Clayton, Jackson, and Durante. By 1934, he had a major record hit, his own novelty composition "Inka Dinka Doo," and it became his signature song for practically the rest of his life. A year later, Durante starred in the Billy Rose stage musical, Jumbo, in which a police officer stopped him while leading a live elephant and asked him, "What are you doing with that elephant?" Durante's reply, "What elephant?" was a regular show-stopper. 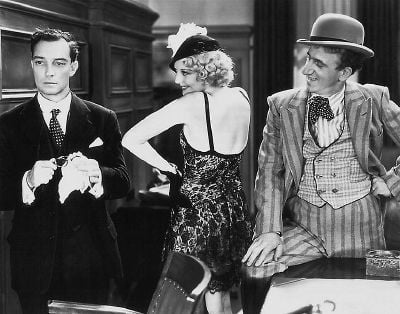 He began appearing in motion pictures at about the same time, beginning with a comedy series pairing him with silent film legend Buster Keaton and continuing with such offerings as The Wet Parade (1932), The Man Who Came to Dinner (1942, playing Banjo, a character based on Harpo Marx), Ziegfeld Follies (1946), Billy Rose's Jumbo (1962, based on the 1935 musical) and It's a Mad, Mad, Mad, Mad World (1963).

Durante made himself a bigger name with his nationally-broadcast radio variety show in the 1940s. Durante received his first radio job when the creators of Eddie Cantor's popular The Chase and Sanborn Hour (which also made stars out of Edgar Bergen and Charlie McCarthy) contacted him to fill in for Cantor. He made his first appearance on September 10, 1933. Durante was such a hit he was offered his own show.

In 1943, Garry Moore joined Durante as his radio sidekick. Already successful as a solo, Durante's comic chemistry with the young, brushcut Moore brought Durante an even larger audience. "Dat's my boy dat said dat!" became an instant catchphrase. He became one of the nation's favorite radio stars for the rest of the decade, including a well-reviewed Armed Forces Radio Network command performance with Frank Sinatra that remains a favorite of radio collectors today. Durante worked in radio for three years after Moore's 1947 departure, including a reunion of Clayton, Jackson, and Durante on his April 21, 1948, broadcast. 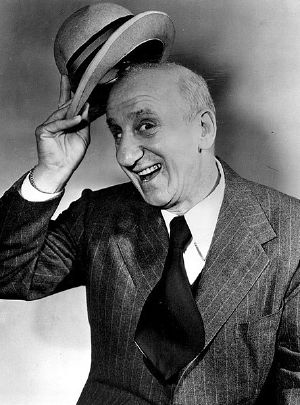 Durante as host of The Hollywood Palace, 1964

Durante made his television debut on November 1, 1950, though he kept a presence in radio as one of the frequent guests on Tallulah Bankhead's two-year, NBC comedy-variety show, The Big Show. Durante was one of the cast on the show's premiere November 5, 1950. The rest of the cast included humorist Fred Allen, singers Mindy Carson and Frankie Laine, stage musical performer Ethel Merman, actors Jose Ferrer and Paul Lukas, and comic-singer Danny Thomas. A highlight of the show was Durante and Thomas, whose own nose rivaled Durante's, in a routine in which Durante accused Thomas of stealing his nose. "Stay outta dis, No-Nose!" Durante barked at Bankhead to a big laugh.

Beginning in the early 1950s, Durante teamed with sidekick Sonny King, a collaboration that would continue until Durante's death. Jimmy could be seen regularly in Las Vegas after Sunday mass outside of the Guardian Angel Cathedral standing next to the priest and greeting the people as they left mass.

On August 4, 1955, The Jimmy Durante Show was the venue of the last performance by the famous Brazilian singer, Carmen Miranda. Miranda fell to her knees while dancing with Durante, who instinctively told the band to "stop da music!" He helped Miranda up to her feet as she laughed, "I'm all out of breath!" "Dat's OK, honey, I'll take yer lines," Durante replied. Miranda laughed again and quickly pulled herself together, finishing the show. However, later that evening, she died at home.

Several times in the 1960s, Durante served as host of ABC's variety hour The Hollywood Palace, which was taped live (and consequently included ad-libs by the seasoned vaudevillian). His last regular television series paired him with The Lennon Sisters and was titled, appropriately, Jimmy Durante Presents the Lennon Sisters. The series lasted for one season (1969–1970).

Durante's radio show was bracketed with two trademarks: "Inka Dinka Doo" as his opening theme, and the invariable sign off that became another familiar national catchphrase: "Good night, Mrs. Calabash, wherever you are." Durante never revealed the meaning, preferring instead to keep the mystery alive.

One theory is that the phrase refers to the owner of a restaurant in Calabash, North Carolina, where Jimmy and his troupe stopped once to eat. He was so taken by the food, the service, and the chitchat that Jimmy told the owner that he would make her famous. Not knowing her name he instead referred to her as "Mrs. Calabash."

Another theory is that it was his personal salute to his late first wife, Jeanne Olsen, whom he married June 19, 1921. They stayed married until her death, on Valentine's Day in 1943. "Calabash" may have been a typical Durante mangle of Calabasas, the southern California locale where the couple made their home for the last years of her life.

If Valentine's Day proved a day of sorrow for the comedian, he made Christmas Day, 1961, even more joyous than usual when he married his second wife, Marjorie Little, whom he had befriended for 16 years after meeting her at the Copacabana, where she worked as a hatcheck girl. She was 39, he 67, when they married. The couple adopted a baby, Cecelia Alicia.

Durante continued his film appearances through It's a Mad, Mad, Mad, Mad World (1963) (in which he dies at the beginning) and television appearances through the early 1970s. He narrated the Rankin-Bass animated Christmas special Frosty the Snowman (1969), re-run for many years since. The television work also included a series of commercial spots for Kellogg's Corn Flakes cereals in the early 1960s, which introduced Durante's gravelly growl and narrow-eyed, large-nosed countenance to millions of children. "Dis is Jimmy Durante, in puy-son!" was his introduction to some of the Kellogg's spots. One of his last appearances was in a memorable television commercial for the 1973 Volkswagen Beetle, where he proclaimed that the new, roomier Beetle had "plenty of breathin' room…for da old schnozzola!"

In 1963, Durante recorded an album of pop standards, September Song. The album became a best-seller and provided Durante's re-introduction, to yet another generation, almost three decades later. His gravelly interpretation of "As Time Goes By" accompanied the opening credits of the romantic comedy hit, Sleepless in Seattle, while his version of "Make Someone Happy" launched the film's closing credits. The former number appeared on the film's best-selling soundtrack. 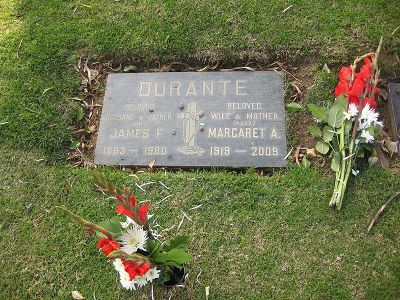 He wrote a foreword for a humorous book titled, Cockeyed Americana, compiled by Dick Hyman. In the first paragraph of the "Foreword!" as Durante called it, he met Hyman and discussed the book and the contribution Hyaman wanted Durante to make to it. Durante wrote, "Before I can say gaziggadeegasackeegazobbath, we're at his luxurious office." After reading the material Hyman had compiled for the book, Durante commented on it, "COLOSSAL, GIGANTIC, MAGNANIMOUS, and last but not first, AURORA BOREALIS. [Captialization Durante's.] Four little words that make a sentence—and a sentence that will eventually get me six months."

Durante suffered a stroke in 1972, and was confined to a wheelchair in the last years of his life. He died from pneumonia in Santa Monica, California, on January 29, 1980, at 86 years old, and was interred at Holy Cross Cemetery, Culver City. Aside from "Dat's my boy dat said dat!" and "It's a catastastroke!" (for "catastrophe,") Durante sent such catch phrases as "Everybody wants ta get inta the act," "Umbriago," and "Ha-cha-cha-chaaaaaaa!" into the vernacular.

Jimmy's love for children continued through the Fraternal Order of Eagles, who, among many causes, raise money for handicapped and abused children. At Jimmy's first appearance at the Eagles International Convention in 1961, judge Bob Hansen inquired about his fee for performing. Jimmy replied, "Don't even mention money judge or I'll have to mention a figure that'll make ya sorry ya brought it up." "What can we do then?" asked Hansen. "Help da kids," was Durante's reply. Jimmy performed for many years at Eagles conventions free of charge, not even accepting travel money. The Fraternal Order of Eagles, in his honor, changed the name of their Children's Fund to the Jimmy Durante Children's Fund, and in his memory have raised over 20 million dollars to help children.

Retrieved from https://www.newworldencyclopedia.org/p/index.php?title=Jimmy_Durante&oldid=1074888
Categories:
Hidden category:
This page was last edited on 1 August 2022, at 13:22.
Content is available under Creative Commons Attribution/Share-Alike License; additional terms may apply. See Terms of Use for details.