Ethel Merman (January 16, 1908 – February 15, 1984) was a Tony Award winning star of stage and film musicals, well known for her powerful voice and vocal range. She is one of the most celebrated ladies of the Broadway musical stage working with Ira and George Gershwin, Cole Porter, and many other Broadway producers.

Ethel Agnes Zimmermann was born in her maternal grandmother's house in Astoria, Queens, New York. Her parents were of German and Scottish decent. Her father, Edward Zimmermann, was an accountant and her mother, Agnes Gardner, was a school teacher. Although many people long assumed she was Jewish because of heritage and her last name, along with the fact that she was from New York City, she was baptized Episcopalian. The Mermans attended church at the Holy Redeemer Episcopal Church, where young Ethel's powerful voice attracted the attention of the local talent scouts. She began making local concert appearances. She also frequently attended vaudeville performances at The Palace Theater in Manhattan, watching great stars like Fanny Brice and Sophie Tucker. She used to stand outside the Famous Players-Lasky Studios and wait to see her favorite Broadway star, Alice Brady. Merman loved to sing songs like “By the Light of the Silv’ry Moon” and “Alexander’s Ragtime Band" while her adoring father accompanied her on the piano.

Merman's parents were quite concerned about their daughter's future and insisted on her learning a valuable skill. She became a stenographer for a local factory after high school, however she also earned extra money singing in local nightclubs. Her night job became very lucrative and her parents finally allowed her to leave the factory job to pursue a singing career.

Merman was married and divorced four times: Her first marriage, in 1940, was to theatrical agent William Smith. They were divorced in 1941. Later that same year, Merman married newspaper executive Robert Levitt. The couple had two children: Ethel (born July 20, 1942) and Robert Jr. (born August 11, 1945). Merman and Levitt were divorced in 1952. In March 1953, Merman married Robert Six, the president of Continental Airlines. They separated in December 1959 and were divorced in 1960. Merman's fourth and final marriage was to actor Ernest Borgnine. They were married in Beverly Hills on June 27, 1964. They separated just over a month later, on August 7, and Borgnine filed for divorce on October 21. In her autobiography Merman, the chapter titled "My Marriage to Ernest Borgnine" consists of one blank page.

She was predeceased by one of her two children, her daughter, Ethel Levitt (known as "Ethel, Jr." and "Little Bit").

After Merman was diagnosed with brain cancer in 1983, she collapsed and died several weeks following surgery at the age of 76 in 1984; she had been planning to go to Los Angeles to appear at the Oscars that year.

Merman was known for her powerful, belting alto voice, precise enunciation, and accurate pitch. Because stage singers performed without microphones when she began singing professionally, she had a great advantage in show business, despite the fact that she never received any singing lessons. In fact, Broadway lore holds that George Gershwin warned her never to take a singing lesson after seeing her opening reviews for Girl Crazy.

She began singing while working as a secretary for the B-K Booster Vacuum Brake Company in Queens. She eventually became a full time vaudeville performer, and played the pinnacle of vaudeville, the Palace Theater in New York City. She had already been engaged for Girl Crazy, a musical with songs by George and Ira Gershwin, which also starred a very young Ginger Rogers in 1930. Although third billed, her rendition of "I Got Rhythm" in the show was popular, and by the late 1930s she had become the first lady of the Broadway musical stage. Many consider her the leading Broadway musical performer of the twentieth century with her signature song being "There's No Business Like Show Business." 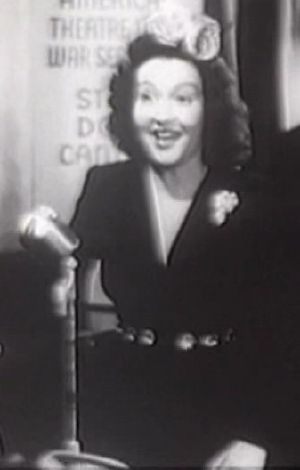 Merman starred in five Cole Porter musicals, among them Anything Goes in 1934 where she introduced "I Get a Kick Out of You," "Blow Gabriel Blow," and the title song. Her next musical with Porter was Red, Hot and Blue in which she co-starred with Bob Hope and Jimmy Durante and introduced "It's Delovely" and "Down in the Depths (on the 90th floor)." In 1939's DuBarry Was a Lady, Porter provided Merman with a "can you top this" duet with Bert Lahr, "Friendship." Like "You're the Top" in Anything Goes, this kind of duet became one of her signatures. Porter's lyrics also helped showcase her comic talents in duets in Panama Hattie ("Let's Be Buddies," "I've Still Got My Health"), and Something for the Boys, ("By the Mississinewah," "Hey Good Lookin'").

Irving Berlin supplied Merman with equally memorable duets, including counterpoint songs "Anything You Can Do" with Ray Middleton in Annie Get Your Gun and "You're Just in Love" with Russell Nype in Call Me Madam.

Merman won the 1951 Tony Award for Best Actress for her performance as Sally Adams in Call Me Madam. She reprised her role in the lively Walter Lang film version.

Perhaps Merman's most revered performance was in Gypsy as Gypsy Rose Lee's mother Rose. Merman introduced "Everything's Coming Up Roses," "Some People," and ended the show with the wrenching "Rose's Turn." Critics and audiences saw her creation of Mama Rose as the performance of her career. She did not get the role in the movie version, however, which went to movie actress Rosalind Russell. Merman decided to take Gypsy on the road and trumped the motion picture as a result.

Merman lost the Tony Award to Mary Martin, who was playing Maria in The Sound of Music. These two women were friends off stage and starred in a legendary musical special on television (unfortunately the two shared something else in common—they would both die of cancer-related illnesses at the age of 76).

Merman retired from Broadway in 1970 when she appeared as the last Dolly Levi in Hello Dolly, a show initially written for her. No longer willing to "take the veil" as she described being in a Broadway role, Merman preferred to act in television specials and movies.

Ethel Merman's film career was not as distinguished as her stage roles. Though she reprised her roles in Anything Goes and Call Me Madam, film executives would not select her for Annie Get Your Gun or Gypsy. Some critics state the reason for losing the roles was her over sized stage persona did not fit well on the screen. Others have said after her behavior on the set of Twentieth-Century Fox's There's No Business Like Show Business, Jack Warner refused to have her in any of his motion pictures, thereby causing her to lose the role of Rose in Gypsy, though some believe Rosalind Russell's husband and agent, Freddie Brisson negotiated the rights away from Merman for his wife. Nonetheless, Stanley Kramer decided to cast her as the battle-axe Mrs. Marcus, mother-in-law of Milton Berle, in the madcap It's A Mad, Mad, Mad, Mad World, a performance that many Merman fans feel was overlooked for an Academy Award nomination for Best Supporting Actress.

Her last movie role was a self-parody in the film Airplane!, appearing as a soldier suffering from shell shock who thinks he is Ethel Merman. Merman sings "Everything's Coming Up Roses" while the nurses drag her back to bed and give her a sedative.

Known for her distinctive, powerful voice, and for leading roles in musical theatre, Merman has been called "the undisputed First Lady of the musical comedy stage." Over her distinguished career in theater she became known for her iconic performances in shows such as Anything Goes, Annie Get Your Gun, Gypsy, and Hello, Dolly!. The Irving Berlin song "There's No Business Like Show Business", written for the musical Annie Get Your Gun, became Merman's signature song.

On February 20, 1984, Ethel's son, Robert Levitt Jr., held his mother's ashes as he rode down Broadway. He passed the Imperial, the Broadway and the Majestic theaters where Merman had performed all her life. Then, a minute before curtain up, all the marquees dimmed their lights in remembrance of her.