Rosalind Russell (June 4, 1907 – November 28, 1976) was a four-time Academy Award nominated and Tony Award winning American film and stage actress, perhaps best known for her role as a fast-talking newspaper reporter in the Howard Hawks screwball comedy His Girl Friday. She is tied with actress Meryl Streep) with the most Golden Globe Awards (for films) wins, with five. It is notable that she won every Golden Globe for which she was nominated.

Russell epitomized the highest qualities aspired of every performer. She was smart, beautiful, energetic, and charming. She modeled each of her screen roles after her own life's experiences.

Rosalind Russell was one of seven siblings born in Waterbury, Connecticut to James Edward and Clara Russell, an Irish-American Catholic family. Her father owned a successful law practice and her mother was a school teacher. She was not named after the character from Shakespeare's As You Like It, but rather after the ship on which her parents had traveled.

She attended the Notre Dame Academy in Waterbury, then Marymount College in Tarrytown, New York. Russell felt a calling to the theater and convinced her parents to allow her to attend the American Academy of Dramatic Arts in New York City. She started her career as a fashion model and in many Broadway shows. Soon after completing her studies she left for Hollywood.

In 1934 Russell was tested and signed exclusively with Universal Studios. However at the same time MGM offered her a contact with a better compensation package. She returned to Universal and successfully pleaded ignorance of Hollywood workings. Universal released her and she immediately signed with MGM for the next seven years. In the early 1930s, she began to work for MGM, where she starred in many comedies, such as Forsaking All Others (1934) and Four's a Crowd (1938), as well as dramas, including Craig's Wife (1936) and The Citadel (1938). In 1939, she was cast as a catty gossip in the all-female comedy The Women, directed by George Cukor.

She married Danish-American producer Frederick Brisson on October 25, 1941. Fred was often referred to in Hollywood as "The Lizard of Roz" due to his habit of getting choice Broadway play roles for the movie to be played by his wife Roz. They had one child in 1943, a son named Lance. Her father-in-law was the successful Danish actor Carl Brisson. 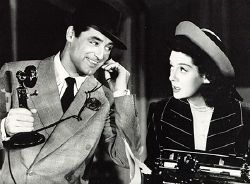 Russell and Cary Grant in His Girl Friday

She proved her quick-witted talent for comedy in the classic screwball comedy His Girl Friday (1940), directed by Howard Hawks. She played a quick-witted ace reporter who was also the ex-wife of her former newspaper editor (played by Cary Grant).

Russell scored a big hit on Broadway with her Tony Award-winning performance in Wonderful Town in 1953. The play was a musical version of her successful film of a decade earlier, My Sister Eileen. Russell reprised her starring role in the musical version in 1958 in a television special.

Probably her most memorable performance was in the title role of the long-running stage hit Auntie Mame (1956) and the subsequent movie version (1958), in which she played an eccentric aunt whose orphan nephew comes to live with her. When asked which role she was most closely identified with, she replied that strangers who spotted her still, called out, "Hey, Auntie Mame!"

Russell died after a long battle with breast cancer in 1976 at the age of 69, although initially her age was misreported because she had shaved a few years off her true age. She was survived by her husband and son. She is buried in Holy Cross Catholic Cemetery in Culver City, California.

Russell was the logical choice for reprising her role as "Auntie Mame" when its Broadway musical adaptation Mame was set for production in 1966. She claimed to have turned it down since she preferred to move on to different roles. In reality, she did not want to burden the public with her growing health problems, which included rheumatoid arthritis.

Her autobiography, written with Chris Chase, entitled Life is a Banquet, was published a year after her death. In the foreward (written by her husband), he states that Russell had a nervous breakdown sometime in the early 1940s. While there are few details regarding Russell's health, this book indicates that her health problems can be traced back to the 1940s.

In 1972 she received the Jean Hersholt Humanitarian Award for contributions to charity. She also was honored with a star on the Hollywood Walk of Fame, at 1708 Vine Street.

Retrieved from https://www.newworldencyclopedia.org/p/index.php?title=Rosalind_Russell&oldid=1091716
Categories:
Hidden category:
This page was last edited on 16 December 2022, at 19:15.
Content is available under Creative Commons Attribution/Share-Alike License; additional terms may apply. See Terms of Use for details.