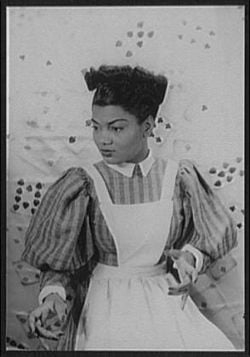 Pearl Mae Bailey (March 29, 1918–August 17, 1990) was an American singer and actress. She is probably most remembered for her role as matchmaker "Dolly Gallagher Levi" in David Merrick's production of Hello Dolly!—a part first created on Broadway by Carol Channing. The all-black version of Hello, Dolly! played on Broadway from 1967 to 1969, and garnered Bailey the theater's highest honor, the Tony Award. Bailey’s career spanned nearly fifty years in all forms of entertainment from Vaudeville to Broadway to Cinema. Her unique delivery, which included ad-libbing and bantering back and forth with the audience, added to her personability and charisma. Throughout her life she performed with her husband, jazz drummer Louie Bellson and other notable musicians such as Louis Armstrong on USO tours that entertained troops overseas. She was appointed an “ambassador of love” by President Richard Nixon in 1970, and went on to serve as a special ambassador to the United Nations through three more presidential administrations. In 1988, President Ronald Reagan awarded her the Presidential Medal of Freedom. .

She was born in Newport News, Virginia, (also the birth place of legendary jazz singer Ella Fitzgerald) to Rev. Joseph and Ella Mae Bailey. She had two sisters, Virgie and Eura and a brother, Willie “Bill” Bailey whose career as a tap dancer was revitalized through the movie Taps starring Gregory Hines in 1989. Pearl Bailey had ancestral lines on both sides of her family that were descended from the Cree Indians.

Although Pearl Bailey had no official music education, she attributed her love of song and dance to her childhood experience in a Pentecostal "holy roller" church where her father was the preacher. Her parents divorced when she was four and the children divided their time between their mother’s home in Philadelphia and their father’s in Washington D.C. After winning a talent contest at the legendary Apollo Theater in Harlem, New York, Bailey dropped out of high school to pursue a career on the vaudeville circuit. Later in life, she would return to her dream of receiving a higher education by entering college at Georgetown University in Washington D.C.

In 1946, she made her Broadway debut in the all black musical St. Louis Woman , produced by Johnny Mercer and Harold Arlen. This was a breakthrough role that took Bailey from Vaudeville to Broadway. Her debut earned her the Donaldson Award as best newcomer on Broadway that year. She honed her distinctive style of entertaining through her nightclub act performing with Cab Calloway, who would become a life long friend, at the Zanzibar Nightclub on Broadway. Her humorous and folksy style was well loved by audiences; she was affectionately called “Pearley Mae” by her fans and close friends. Her singing voice was described as throaty with a low growl best suited to jazzy classics such as Toot Toot Tootsie (Goodbye) and Bill Bailey, Won't You Please Come Home. The London Times described her "throw-away style," as it would come to be known, as:

...seemingly haphazard but in fact cunningly controlled lapses of vocal concentration causing the lyrics to disappear under a groundswell of mumbled monologue which always slipped back into the rhythmic pattern of the song with unerring accuracy.

During the 1940s, she debuted as a soloist with Big Bands such as the Edgar Hayes Orchestra and the Cootie Williams band. Taking her act overseas she performed with other Jazz greats such as Count Basie on USO tours entertaining American troops during World War II.

After finding success with cabarets and stage productions she went on to try her talents in film. Her first movie was Paramount's Variety Girl. In the movie she sang what would become one of her signature numbers, "Tired." In the 1950s, she played important roles in two all-black major studio musicals: that of "Frankie" in Carmen Jones (1954) an updated musical rendition of Georges Bizet's opera, Carmen, also starring Harry Belafonte, and that of "Maria" in George Gershwin's Porgy and Bess, also starring Sidney Poitier. Later that year she played the role of "Aunt Hagar" in the movie St. Louis Blues alongside Mahalia Jackson, Eartha Kitt, and Nat King Cole. Another memorable stage performance, in 1954, was that of "Madame Fleur" in the Truman Capote musical House of Flowers.

She was a featured performer at President Dwight D. Eisenhower's inauguration in 1957, beginning what would become a lifelong aside to her career—entertaining at the White House.

In 1967, at the height of her career, Pearl Bailey played the lead role of "Dolly" in the all-black Broadway revival of Hello Dolly!. She co-starred opposite her nightclub cohort and friend Cab Calloway. Pearl received unanimous raves for her work and was presented with a special Tony award for her performance. The Broadway production, which ran for two years, was forced to close due to Bailey's ongoing heart problems.

Pearl had her own television variety show in 1971, and played a supporting role in the television sitcom Silver Spoons for several years. She also returned to her first love, cabaret singing, whose intimate venue suited her style of entertaining and engaging the audience.

In 1942, Pearl Bailey married fourth husband, Louie Bellson, an accomplished Jazz drummer who often performed backup for Pearl. Their interracial marriage lasted nearly forty years, until Pearl's death in 1990, from heart failure. Together they adopted two children, Tony and DeeDee, who often traveled with their parents while they entertained troops overseas at USO events. Bailey once said that the perennial favorite of these tours was the ever popular Bob Hope.

In 1975, Bailey was appointed Special Ambassador to the United Nations by Gerald Ford. As part of her role she visited and performed for a wide array of world leaders that included Anwar Sadat of Egypt (who was later assassinated), the former Shah of Iran and King Hussein of Jordan, among others. As a special representative she not only performed at events, but on at least one occasion she addressed a special session to the United Nations as well. Her concerns included raising awareness for AIDS research. Among her many U.N. related travels she was to witness and write about the plight of children in refugee camps in both Palestine and Africa. When a U.N. delegate criticized her for being there as a mere entertainer she replied:

I sit in this seat33I am here for my business and the love of the entire world because I love God, I love truth, and I want to see peace on earth.

Pearl Bailey was given an honorary degree by Georgetown University in 1978, and while receiving her award onstage she stunned and delighted her audience by telling them that she planned to return to college there the following year. In 1985, after five years of studying she graduated with a B.A. in Theology. She was sixty-seven years young. At first Bailey majored in French and when asked why she switched from French to Theology she said, "Because it's easier to know the Lord than it is to know French." In her memoir, Between You and Me, written the year before she died, she encouraged other senior citizens to peruse their dreams.

Pearl Bailey wrote six books, three of them memoirs, that are filled with homespun wisdom ranging from cooking to child rearing. In her book Between You and Me she shared many of her unique experiences while serving as a United Nations special representative. She met not only world leaders but worked with their wives on various projects such as the Reading is Fundamental literacy program initiated by Barbara Bush. Her memoir provides a multi-faceted perspective that could only come from someone working behind the scenes. Her book, Duey's Tale, a children's fable, won the Coretta Scott King Award for children's literature in 1976.

Pearl Bailey died from heart failure at the age of 72. Two thousand people attended her funeral in Philadelphia where she had been visiting her sisters while recuperating from knee surgery. Her husband Louie said in his eulogy, "she was a person of love, she believed that 'show business' was a show love business."

In 1968, she received the March of Dimes Annual Award and in 1972, the "Heart of the Year" award by the American Heart Association. The Women's International Center presented the Living Legacy Award to Pearl Bailey, on March 11, 1989. She was awarded a Presidential Medal of Freedom in 1988, by President Ronald Reagan.

She had been scheduled to address the United Nations on the 24th of August but she died on August 17th, 1990.

Retrieved from https://www.newworldencyclopedia.org/p/index.php?title=Pearl_Bailey&oldid=1088716
Categories:
Hidden category:
This page was last edited on 23 November 2022, at 07:09.
Content is available under Creative Commons Attribution/Share-Alike License; additional terms may apply. See Terms of Use for details.