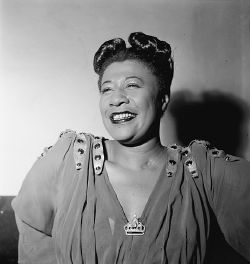 Ella Jane Fitzgerald (April 25, 1917 – June 15, 1996), also known as Lady Ella (the First Lady of Song), is one of the most well loved and influential jazz vocalists of the twentieth Century. Her vocal range spanned three octaves. Ella was known for her purity of tone, near faultless phrasing and intonation, and improvisational ability. She was instrumental in developing scat singing, using her voice like a musical instrument, particularly mimicking the sounds of the horn section. She was one of the supreme interpreters of the Great American Songbook.[1]

In spite of her lack of formal voice training, Ella's voice quality was in a class with formally trained opera singers. Her vocal talent was a gift that came to fruition in spite of tragedy, personal difficulties, and lack of educational opportunity in her youth.

Over a vibrant and prolific performing and recording career of fifty-seven years, Ella was the winner of thirteen Grammy Awards. She was awarded the National Medal of Art by President Ronald Reagan and the Presidential Medal of Freedom by President George H.W. Bush. Ella Fitzgerald's music was cross-cultural, attracting listeners from across the racial and cultural spectrum. Her music spoke to the soul of her listeners, irrespective of their racial or cultural identity.

Her father, William Fitzgerald, and mother, Temperance, or Tempie, Fitzgerald separated soon after her birth. She never knew her father. Ella and her mother, moved to Yonkers, New York, to live with Tempie's boyfriend, Joseph Da Silva. Ella's half-sister, Frances Fitzgerald was born in 1923.

As Ella struggled to deal from the loss of her mother, her grades dropped dramatically. She frequently skipped school. After getting into trouble with the police, she was sent to reform school. Eventually, Ella escaped from the reformatory, and was homeless for a time.

She made her singing debut at age 17, on November 21, 1934, at the Apollo Theater in Harlem. Ella's name was pulled in a weekly drawing at the Apollo. She won the opportunity to compete in one of the earliest of the theater's famous "Amateur Nights." She had originally intended to go on stage and dance, but was intimidated by the Edwards Sisters, a local dance duo. Ella opted to sing in the style of her idol, Connie Boswell of the Boswell Sisters. She sang Hoagy Carmichael's "Judy," and "The Object of My Affections," also by the Boswell Sisters, that night. The crowd applauded enthusiastically and Ella won the competition.

In January 1935, she won the chance to perform for a week with the Tiny Bradshaw Band at the Harlem Opera House. Ella first met drummer and bandleader Chick Webb there. Webb had already hired male singer Charlie Linton to work with the band, but he offered Ella the opportunity to test with his band when they played a dance at Yale University. Despite the tough crowd, Ella's singing created quite a stir and got everyone dancing. Webb hired her to travel with the band for $12.50 a week.

She sang regularly with Webb's Orchestra through 1935, at Harlem's popular Savoy Ballroom. Fitzgerald recorded several hit songs with the orchestra, including "(If You Can't Sing It), You'll Have to Swing It (Mr. Paganini)" and "Love and Kisses" (her first recording). But it was her 1938 version of the nursery rhyme, "A-Tisket, A-Tasket" that brought her wide public acclaim.

Before long, World War II was underway. The draft, and other factors, dispersed the orchestra. Fitzgerald began her solo career. By 1941, she signed with Decca Records label, and had several popular hits. Ella recorded with artists such as the Ink Spots, Louis Jordan, and the Delta Rhythm Boys.

Decca's Milt Gabler was Ella's manager. She began working for jazz impresario Norman Granz, appearing regularly in his "Jazz at the Philharmonic" concerts. Fitzgerald's relationship with Granz was further cemented when he became her manager, although it was nearly a decade before he could record her on one of his many record labels.

With the demise of the Swing era, and the decline of the great touring big bands, a major change in jazz music occurred. The advent of be-bop fostered a shift in Fitzgerald's vocal style, influenced by her work with Dizzy Gillespie's big band. This is when Fitzgerald started scat singing as a major part of her performance repertoire. Her 1947 recordings of "Oh, Lady be Good!" "How High the Moon" and "Flying Home" became popular, increasing her reputation as one of the leading jazz vocalists.

Under pressure from Granz, who felt Fitzgerald had been given unsuitable material to record, Fitzgerald recorded a series of duets with pianist Ellis Larkins, during her last years with Decca. These duets were released in 1950, as Ella Sings Gershwin.

In the mid-1950s, Ella became the first African-American to perform at the Mocambo. Marilyn Monroe had lobbied the owner for the booking. The booking was instrumental in Fitzgerald's career.

The eight "Songbooks" that Fitzgerald recorded for Verve Records between 1956 and 1964 represent her most critically acclaimed and commercially successful work. This body of work was also likely her most significant contribution to American culture. The composers and lyricists for each album represent the best of the cultural canon known as the Great American Songbook.

The eight albums are as follows, with arrangers in parentheses:

Some people have commented on the irony of Ella's romantic life. She sang about perfect romances, but never seemed to live the dreams she sang about. Ella's demanding tour and recording schedule from the mid 1930s until the early 1990s, made sustaining any relationship difficult.

Fitzgerald married twice, though there is evidence that she may have married a third time. In 1941, she married Benny Kornegay, a convicted drug dealer and hustler. The marriage was quickly annulled.

Fitzgerald married for the second time in 1947, to the famous double bass player Ray Brown. She met him while on tour with Dizzy Gillespie's band in 1946. They adopted a child born to Fitzgerald's half-sister, Francis Fitzgerald. The new parents christened their son, Ray Brown, Jr. Fitzgerald and Brown divorced in 1952, most likely due to the ongoing strain and demands of their respective careers.

In July 1957, Reuters reported that Fitzgerald had secretly married Thor Einar Larsen, a young Norwegian in Oslo. But the affair was quickly forgotten when Larsen was sentenced to five months hard labor in Sweden for stealing money from a young woman to whom he had previously been engaged.

Ella Fitzgerald recorded albums exclusively devoted to the songs of Porter and Gershwin in 1972 and 1983. The albums were Ella Loves Cole and Nice Work If You Can Get It. A later collection devoted to a single composer was produced at Pablo Records titled, Ella Abraça Jobim, featuring the songs of Antonio Carlos Jobim.

While recording the Songbooks (and the occasional studio album), Ella toured extensively, both in the United States and internationally. Norman Granz tutored Ella and helped solidify her position as one of the leading live jazz performers of the time.

Several live albums on Verve Records are highly regarded by critics. Ella at the Opera House shows a typical JATP set from Ella. Ella in Rome: The Birthday Concert is a verifiable 1950s jazz vocal masterclass. Ella in Berlin: Mack the Knife is still one of Ella's best selling albums. 1964's Ella at Juan-Les-Pins and 1966's Ella and Duke at the Cote D'Azur both find a confident Ella accompanied by a stellar array of musicians.

Verve Records was sold to Metro Goldwyn Mayer in 1963. In 1967, MGM failed to renew Ella's contract. Over the next 5 years, she moved between several labels; Atlantic Records, Capitol Records, and Reprise Records. Some of Ella's material during this period represents a curious departure from her typical jazz repertoire. Brighten the Corner is an album of Christian hymns. Misty Blue is a country and western influenced album. 30 by Ella is a series of six medleys that neatly fulfilled Ella's obligations to the record label. This demonstration of her ability to embrace various styles of music only amplifies her greatness.

The surprise success of the 1972 album, Jazz at Santa Monica Civic '72 led Norman Granz to found his first record label since the sale of Verve, Pablo Records. Ella recorded some 20 albums for the label. Her years on Pablo documented the decline of her voice.

Plagued by health problems, Fitzgerald made her last recording in 1989, and her last public performances in 1991. Already blinded by the effects of diabetes, both her legs were amputated in 1993. In 1996, at the age of 79, she died of the disease in Beverly Hills, California. She is interred in the Inglewood Park Cemetery in Inglewood, California.

Several of Fitzgerald's awards, significant personal possessions, and documents were donated to the Smithsonian Institution, the library of Boston University, and the Library of Congress.

A few days after Fitzgerald's death, The New York Times columnist Frank Rich wrote that in the American Songbook series, Fitzgerald "performed a cultural transaction as extraordinary as Elvis Presley's contemporaneous integration of white and African-American soul. Here was a black woman popularizing urban songs often written by immigrant Jews to a national audience of predominantly white Christians." Out of respect for Fitzgerald, Frank Sinatra was moved to block Capitol Records from re-releasing his own albums in a similar, single composer vein.

Collaborations with other jazz artists

Fitzgerald's most famous collaborations were with the trumpeter Louis Armstrong, the guitarist Joe Pass, and bandleaders Count Basie and Duke Ellington.

Although they never did an album together, Ella and Frank Sinatra appeared together periodically over the years, in television specials in 1958, 1959, and in 1967, in a show that also featured Antonio Carlos Jobim. Fitzgerald's appearance with Sinatra and Count Basie in June 1974, for a series of concerts at Caesars Palace, Las Vegas, was an important impetus for Sinatra to return from his self-imposed retirement in the early 1970s. In September 1974, the trio performed for two weeks on Broadway with the Count Basie Orchestra. The shows were a great critical and financial success.

Just the sheer length of Ella Fitzgerald's career and the number of recordings and concerts she did as well as the vast breadth of the many styles of music she embraced and her many, many collaborations speaks to her energy, flexibility and musical giftedness. Countless audiences still enjoy and will continue to enjoy the beauty of her voice and her ability to reach right through to our souls.