Mahalia Jackson (October 26, 1911 – January 27, 1972) was an American gospel singer, the leading exponent of the music in her generation, and sometimes regarded as the best in the history of the genre. Known for her rich, powerful voice, Jackson became one of the most influential gospel singers in the world. Her music reached millions, transcending the traditional black gospel market and extending beyond the U.S. to Europe and the world.

Born in New Orleans, Louisiana, Jackson was a devout Baptist. After moving to Chicago in the late 1920s, she worked with pioneer gospel composer Thomas A. Dorsey before her musical career took off in the 1940s. She also began appearing on radio and television. In 1958, she appeared at the Newport Jazz Festival in Rhode Island, performing with Duke Ellington and his band.

During the course of a career that led to a Grammy Lifetime Achievement Award and posthumous induction into the Rock and Roll and Gospel Halls of Fame, Jackson remained firmly within the gospel tradition. She turned down numerous lucrative offers to record secular songs, yet found personal rewards in bringing the Christian message to both black and white audiences in an age where integration was still in its infancy. Throughout the 1950s, Jackson packed concert halls in Europe and around the world. She appeared on the popular Ed Sullivan Show in 1956, sang for President Dwight Eisenhower, and performed at President John F. Kennedy's inaugural ball in 1961.

Jackson became an active supporter of the civil rights movement in the 1960s. She sang at the March on Washington at the request of Dr. Martin Luther King, Jr. in 1963. After King’s death in 1968, Jackson sang at his funeral. Jackson died of a heart attack on January 27, 1972. She is remembered for her strong, soulful delivery, her deep commitment to her faith, and her lasting influence on musicians working in all types of musical genres.

Mahalia Jackson grew up in the "Black Pearl" section of the Carrollton neighborhood of Uptown New Orleans. The three-room dwelling on Pitt Street housed 13 people. This included Mahalia, whom the family affectionately called “Halie” for short, her brother Roosevelt, and her mother Charity. Several aunts and cousins lived in the house as well. Mahalia was named after her aunt, Mahalia. Family members then conferred upon the aunt the title of Aunt Duke, as she was known as the “boss” of the family.

When Halie was born she suffered from a condition known as genu varum or what is commonly called "bowed legs." The doctors wanted to perform surgery by breaking her legs and resetting them, but one of the resident aunts would not hear of it. Instead, Halie's mother would rub her legs down with greasy dishwater. Her condition did not stop young Halie from performing her dance steps for the white woman for whom her mother and Aunt Bell cleaned house.

When Mahalia was six, her mother, Charity, died. It was a terrible blow to the family, which now had to face the decision as to who would keep Halie and her brother, Peter. The strict matriarch of the clan, Aunt Duke, assumed this responsibility. The children reportedly had to work from sun-up to sun-down doing housework for clients as their mother had done. Aunt Duke would inspect the house using the "white glove" method. If the house was not cleaned properly, Halie would be beaten with a "cat-o-nine-tails." If one of the other relatives was unable to do their chores, or clean at their job, Halie or one of her cousins was expected to perform that particular task. School was not an option.

Halie loved to sing and church is where she loved to sing the most. She began her singing career at the local Mount Moriah Baptist Church. Her talent showed early, and Halie’s Aunt Bell told her that one-day she would sing in front of royalty. 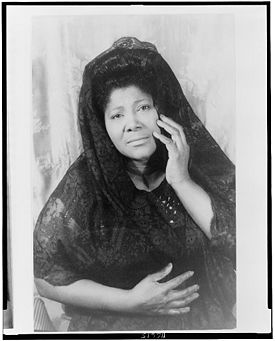 In 1927, Jackson moved from the South to Chicago, Illinois, in the midst of the Great Migration of African-Americans northward. There she sang with The Johnson Brothers, one of the earliest professional gospel groups. She later married Isaac Hockenhull, who was ten years her senior. Jackson refused to sing secular music, a pledge she would keep throughout her professional life despite enormous financial inducements to do otherwise. She eventually divorced Isaac because of his unrelenting pressure on her to cross over to the pop market.

The Johnson Brothers broke up in the mid-1930s, and Jackson began her solo career in 1937. Though her recording of "God's Gonna Separate the Wheat from the Tares," was only a moderate success, she became a popular concert draw. She began recording again in 1946, and in 1948 her "Move on Up a Little Higher" was so popular that stores could not stock enough copies of it to meet demand. The success of this record rocketed Jackson to fame in the U.S. and soon after in Europe. Other of her recordings also received wide praise, including: "I Can Put My Trust in Jesus," which won a prize from the French Academy, and "Silent Night" which became one of the best-selling singles in the history of Norway.

Jackson's career in the late 1950s and early 1960s continued to rise. She began a radio series on CBS and signed to Columbia Records in 1954. However, with her mainstream success came an inevitable backlash from gospel purists who felt she had watered down her sound for popular accessibility.

Jackson had many notable accomplishments during this period, including her performance of several gospel songs in the 1958 film, St. Louis Blues and singing "Trouble of the World" in 1959's Imitation of Life. She also recorded with Percy Faith and gave important performances at the Newport Jazz Festival in 1958 and 1959. She sang at the 1961 inauguration of U.S. President John F. Kennedy, and at the March on Washington in 1963 she sang the gospel standard "How I Got Over." She also sang "Take My Hand, Precious Lord" at the funeral Martin Luther King, Jr. The late 1960s saw a downturn in her popular success. She ended her career in 1971 with a concert in Germany, and when she returned home to the United States, made one of her final television appearances on The Flip Wilson Show.

Mahalia Jackson died in Chicago on January 27, 1972, of heart failure and diabetes complications at age 60. She was buried in Providence Memorial Park in Metairie, Louisiana. The year of her death, Jackson was honored with the Grammy Lifetime Achievement Award. In addition, she was posthumously inducted into the Gospel Music Association's Gospel Music Hall of Fame in 1978.

Jackson is widely regarded as one of the greatest gospel singers in history and one of the great voices of the twentieth century. Her friend Martin Luther King said "a voice like hers comes along once in a millennium."

In addition to sharing her singing talent with the world she mentored the extraordinarily gifted Aretha Franklin, being a close friend of Aretha's father, C. L. Franklin, and a frequent guest in the Franklin home. She was also a close friend of fellow Chicago-based gospel singer Albertina Walker, founder of the world-renowned gospel group The Caravans. Jackson is also credited with the discovery of the young Della Reese.

In 1997, Jackson was inducted into the Rock and Roll Hall of Fame as "a pioneer interpreter of gospel music whose fervent contralto was one of the great voices of this century".[2] Jackson was the first gospel artist to be granted a star on the Hollywood Walk of Fame.

Retrieved from https://www.newworldencyclopedia.org/p/index.php?title=Mahalia_Jackson&oldid=1085746
Categories:
Hidden category:
This page was last edited on 5 November 2022, at 05:25.
Content is available under Creative Commons Attribution/Share-Alike License; additional terms may apply. See Terms of Use for details.