Portrait of maharaja Ranjit Singh, ruler of the Punjab and adjacent areas between 1801-1839.

Maharaja Ranjit Singh (Punjabi: ਮਹਾਰਾਜਾ ਰਣਜੀਤ ਸਿੰਘ ), also called "Sher-e-Punjab" ("The Lion of the Punjab") (1780-1839) was a Sikh emperor of the sovereign country of Punjab and the Sikh Empire. His Samadhi is located in Lahore, Pakistan. For almost 40 years, Ranjit ruled over one of the largest territories in India not at that time under British control. He extended his territory from the cities of Lahore and Amritsar to include all of the Punjab between the Sutlej and Indua rivers. He avoided conflct with the British over a disputed border by entering a peace treaty with them, which he subsequently honored. He promoted trade and commerce, and, running an efficient and safe state, gained the respect of his powerful neighbors. He used European generals and craftsmen to improve his army and artillery. Madra and Singh (2004) describe him as having a "genius for command." He was "the only man in the nineteenth century the Sikhs ever produced strong enough to bind them together." Unfortunately, lack of leadership paralyzed the state after his death, which "fell to pieces through sheer want of leadeship" and was acquired by the British.[1]

Maharaja Ranjit Singh was a Sikh born in 1780 in Gujranwala in modern day Pakistan, into the Sansi-Sandhawalia family. At the time much of Punjab was ruled by the Sikhs, who had divided the territory among factions known as misls. Ranjit Singh's father Maha Singh was the commander of the Sukerchakia misl and controlled a territory in west Punjab based around his headquarters at Gujranwala.

Ranjit Singh succeeded his father at the young age of 12. As a result of smallpox in his childhood, Ranjit lost the use of his left eye. When he was 19, he persuaded the king of Aghanistran to grant him the City of Lahore, which he subsequently took by force (1799). By 1802, he had added the sacred city of Amritsra to his territory, which now included the two most important centers in the Punjab. After several campaigns, his rivals accepted him as their leader, and he united the Sikh factions into one state.

Ranjit Singh took the title of Maharaja on April 12, 1801 (to coincide with Baisakhi day). Lahore served as his capital from 1799. In 1802, he took the holy city of Amritsar. 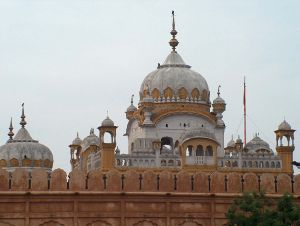 The Samadhi of Emperor Ranjit Singh in Lahore, Pakistan

By 1805, a border dispute with the British East India Company was threatening to erupt into a full scale war. Realizing that he could not afford to fight the emerging power in India, he instead entered negotation. Writing in 1805 to the British Governor-General, Arthur Wellesley later the first Duke of Wellington, he offered in return for peace the neutrality of certain Sikh states and also the territory of the Phulkian Rajahs. Although he did not actually govern these states, he had on several occassions driven back their incursions into his territory, so he would have "considered it entirely legitmate" to offer these states to the British[2].

He then spent the following years fighting the Afghans, driving them out of western Punjab. In 1810, he annexed Multan after a long siege and in 1823 a treaty brought the province of Peshawar under his rule. This was the first time that Pashtuns were ruled by non-Muslims. In a historical perspective, this event was very important. For more than a thousand years invaders had come down from the Khyber pass and ruled eastern lands. Ranjit Singh reversed this trend. When the Sikh empire finally fell to the English, they were able to retain this province. He captured the province of Multan which encompassed the southern parts of Punjab, Peshawar (1818), Jammu and Kashmir (1819) and the hill states north of Anandpur, the largest of which was Kangra.

Singh also hired European mercenaries including several former Napoleonic Generals to train his troops, creating the first modern Indian Army, a powerful military force whose presence delayed the eventual British colonization of Punjab. He created a powerful and heavily armed state; at this point, Punjab was the only state not controlled by the British. A contemporary report says that he could muster, "one hundred fighting men, horse and foot" [3] He sent an engineer to study the "British military workshops at Ludhiana" so that he could improve the effeciency of his artillery.[4]

He brought law and order, yet was reluctant to use the death penalty. Contemporary reports comment that the Punjab had become a safe place for travel and for trade. One writer observed:

This part of the Punjab, as well as every other part of it, where the rajah's influence and authority exists, is under good police, and the country perfectly sage for travellers; capital crimes and robberies seldom occuring ... [5].

He is said to have abolished capital punishment, although the above account refers to him hanging offenders.

This famous diamond, now incorporatd into the British Crown Jewels, had been in the possession of the Moghul Emperors until it became the property of the kings of Afghanistan. In 1830, the deposed King, Shah Shuja, fled to Lahore, where he presented the diamond to Ranjit. Ranjit then used the diamond to negotiate British help in restoring Shuja to power, apparently offering to cede the diamond to Victoria of the United kingdom on his death. However, on his death bed, he offered the diamond to a famous Hindu temple. This resulted in a dispute over ownership. When the British annexed the Punjab, they claimed the diamond on the basis that Ranjit had bequethed it to them. It became part of the Crown Jewels. Ownership is still contested. India, Pakistan, and Iran have all laid a claim, requesting Britain to relinquish the jewel.

A British visitor to Lahore, writing in 1808, described Ranjit as:

rather below the middle stature, and of very affable and unaffected manners, active, and fond of exercise of horseback, which he takes early every morning. He is considered brave and clever in the field, quick in his conceptions and possesses a good natural understanding...[6]

Ranjit was renowned for his fondness of guns.

He stopped Indian non-secular style practises by treating Hindus and Muslims equally. He banned the discriminatory "jizya" tax on Hindus and Sikhs. Given that Sikhs had been persecuted by Muslim rulers, it is a measure of Ranjit's character that he did not recipricate by discriminating against Muslims. Instead, he practiced what Sikhs' preach, religious tolerance since God does not look at the label people wear but at their deed and into the innermost depths of their hearts.

The majority of Ranjit Singh's subjects were Muslim and had an intense loyalty towards him and his Sikhs. This was once highlighted when the foreign minister of the Sikh Empire, a Muslim named Fakir Azizuddin, had a meeting with the British Governor-General. When Lord Auckland asked Fakir Azizuddin which of the Maharaja's eye was missing, he replied: "the Maharaja is like the sun and sun has only one eye. The splendour and luminosity of his single eye is so much that I have never dared to look at his other eye." The Governor General was so pleased with the reply that he gave his golden wrist-watch to the Maharaja's Minister at Simla.[7]

His Empire was effectively secular as it did not discriminate against Sikhs, Muslims, Hindus, or even atheists. It was relatively modern and had great respect for all religions and non-religious traditions of the Empire. The only main prominent religious symbols of the empire were the Maharaja and royal family being Sikh (but not Khalsa) and the Army being dominated by Sikh nobles and the Khalsa. The Maharaja never forced Sikhism on his subjects. This was in sharp contrast with the ethnic and religious cleansing of past Moghul rulers. Ranjit Singh had created a state based upon Sikh noble traditions, where everyone worked together, regardless of background, and where citizens were made to look at the things that they shared in common (e.g. being Punjabi, rather than any religious differences).

At Lahore, he established the first printing press to use the Gurmukhi script. He encoraged trade and commerce.

Ranjit Singh died in 1839. Rulership of the state went to his eldest son Kharak Singh. Most historians believe competent political heirs would have forged a highly durable, independent and powerful state, as Ranjit Singh had done during his rule. However, the Kingdom began to crumble due to poor governance and political mismanagement by his heirs. His successors died through accidents and murder, while the nobility and army struggled for power.

After the First Anglo Sikh War, Punjab effectively ceased to be an independent state and all major decisions where made by the British Empire. The Punjabi Army was reduced under the peace treaty with the British Empire, to a tiny skeleton force. Massive punishing war compensation had destroyed any meaningful, independent fiscal policy. At the end of the Second Anglo Sikh War, it was annexed by the British from Ramjit Singh's youngest son Duleep Singh.

Ranjit is remembered for uniting the Punjab as a strong state and his possession of the Koh-i-noor diamond. His most lasting legacy was the beautification of the Harmandir Sahib, holiest site of the Sikhs, with marble and gold from which the popular name of the "Golden Temple" is derived.

He was also known as Sher-e-Punjab, the Lion of Punjab and is considered one of the 3 Lions of India, the most famous and revered heroes in North Indian history (Emperor Rajaraja Chola and Asoka were the two most powerful Indian kings of history yet are not named part of the 3 Lions) - the other two Lions are Rana Pratap Singh of Mewar and Chhatrapati Shivaji, the legendary Maratha ruler. The title of Sher-e-Punjab is still widely used as a term of respect for a powerful man.

After his death, the British took his heir, the young prince Maharaja Duleep Singh, to England where he was put under the protection of the Crown. One of his duties there was to present the Kōh-i Nūr diamond to the Queen, He converted to Christianity, before re-converting to Sikhism later in his life. Some Sikhs in India who want an independent Punjab, or Khalistan (land of the Pure) invoke the legacy of Ranjit's rule as an historical claim to the legitimacy of a Sikh state, although his rule was secular.

Once during a visit to Badrinath by King Ranjitsinh he was awed by the prescense of one young youth about the same age as him. The youth was Neelkanth Varni who goes to established the Swaminarayan Sampraday and is worshiped as God by millions today.

Retrieved from https://www.newworldencyclopedia.org/p/index.php?title=Maharaja_Ranjit_Singh&oldid=1085747
Categories:
Hidden category:
This page was last edited on 5 November 2022, at 05:26.
Content is available under Creative Commons Attribution/Share-Alike License; additional terms may apply. See Terms of Use for details.