The Harmandir Sahib (Punjabi: ਹਰਿਮੰਦਰ ਸਾਹਿਬ) or Darbar Sahib (Punjabi: ਦਰਬਾਰ ਸਾਹਿਬ), also known as the Golden Temple of Amritsar, stands as the central holy place in the Sikh religion. The housing of the holiest scripture of the Sikh faith, the Guru Granth Sahib, within the temple bestows upon Harmandir Sahib the highest blessing. The fourth Guru of Sikhism, Guru Ram Das, excavated a tank (a reservoir) in 1577 C.E., building the temple in it. The gold plated temple, sitting in the tank, created a spectacular effect. The tank took on the name "Amritsar" meaning "Pool of the Nectar of Immortality." The town growing up around the holy temple took on the same name. Harmandir Sahib means "House of God." So, the full meaning is "House of God sitting in the Pool of the Nectar of Immortality."

Sikhism has played a vital role in the history of India. An indigenous faith, Sikhism has emerged as a major religion among the religions of India, its existence beginning in the sixteenth century. The Harmandir Sahib was constructed to convey openness to all religions and all people. The four open doors symbolize Abraham's tent open on all four sides, welcoming travelers to enter from any direction. The Harmandir Sahib stands as a daily testimony to Sikhism's commitment to practice respect and openness to people of all faiths. In that capacity, Sikhism has been a creative force for unity among the religions of India and throughout the world.

Sikhs consider the Harmandir Sahib holy because the Holy Scriptures and eternal Guru of Sikhism, the Sri Guru Granth Sahib, always resides inside. The temple was constructed as a place of worship for men and women from all walks of life and all religions to come and worship God equally.[2]The Sri Guru Granth Sahib constitutes the holiest literature in the Sikh religion. The tenth Guru of Sikhism, Guru Gobind Singh on October 7, 1708, made it the eternal Sikh Guru and the teacher of Sikhism. The holy scripture Guru Granth Sahib makes the place it resides, anywhere in the world, equally holy and precious to Sikhs.

Did you know?
Harmandir Sahib (the Golden Temple of Amritsar) literally means "House of God"

Harmandir Sahib literally means "House of God." The fourth Guru of Sikhism, Guru Ram Das, excavated a tank in 1577 C.E. which subsequently became known as Amritsar (meaning: Pool of the Nectar of Immortality). The city growing up around it took on the name. In due course, a splendid Sikh edifice, Harmandir Sahib, rose in the middle of that tank and became the supreme center of Sikhism. Its sanctum came to house the Adi Granth comprising compositions of Sikhi Gurus and other saints considered to have Sikh values and philosophies, for example Baba Farid and Kabir. The fifth Guru of Sikhism, Guru Arjan Dev, started the compilation of the Adi Granth.

Amritsar situates in the Majha region of the Punjab. Majha, also known as the Bari Doab, comprising the Doab (Do = two, ab = rivers) or the (fluvial) tract of land laying between two of the five great rivers of the province, the Ravi and the Beas. As such, Majha lies in the heart of the ancient Punjab region, comprised of Gurdaspur, Batala and Tarn Taran Sahib as well as Amritsar.

Construction of the Harmandir Sahib 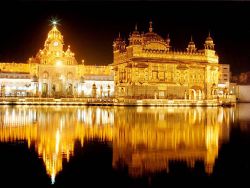 The Harimandir Sahib at night with lights

Originally built during 1574 C.E., a small lake in a thin forest surrounded the site of the temple. The third of the six grand Mughals, emperor Akbar, visiting the third Sikh Guru, Guru Amar Das, at the neighboring town of Goindval expressed admiration for the way of life in the town. He gave a jagir (the land and the revenues of several villages in the vicinity) to the Guru's daughter Bhani as a gift on her marriage to Bhai Jetha. He later became the fourth Sikh Guru, Guru Ram Das. Guru Ram Das enlarged the lake and built a small township around it. The town, named after Guru Ram Das, called "Guru Ka Chak", "Chak Ram Das", or "Ram Das Pura".

The fifth Guru, Guru Arjan Dev (1581-1606), built the temple in final form. In December 1588, the great Muslim Sufi saint of Lahore, Hazrat Mian Mir, who was a close friend of Guru Arjan Dev Ji, initiated the construction of the temple by laying the first foundation stone (December 1588 C.E.).[3][1] A mason then straightened the stone but Guru Arjan Dev told him that, as he had undone the work just completed by the holy man, a disaster might come to the Harmandir Sahib. The Mughals later attacked it.

Completed in 1604, Guru Arjan Dev, installed the Guru Granth Sahib, appointed Baba Buddha Ji as the first Granthi (Reader) on August 1604 C.E. In the mid-eighteenth century, the Afghans attacked, lead by one of Ahmed Shah Abdali's Generals, Jahan Khan. The temple had to be substantially rebuilt in the 1760s. In response, a Sikh Army embarked to hunt down the Afghan force. Ordered to show no mercy, historical evidence suggests they carried out their orders. The opposing armies met each other five miles outside Amritsar, Jahan Khan's army utterly defeated. Commander Sardar Dayal Singh decapitated him himself.

The Harmandir Sahib Complex and areas in its vicinity 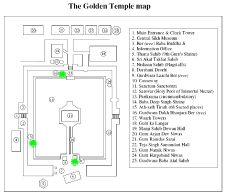 Map of the Harmandir Sahib

A large lake of water, known as the Sarovar which consists of Amrit (Holy Water or Immortal Nectar), surrounds the temple. The four entrances to the temple signify the importance of acceptance and openness. Ostensibly, that concept calls to memory the tent of Abraham in the Old Testament. His tent remained open on all four sides to welcome travelers from all directions. Inside the temple complex, many shrines exist to past Sikh Gurus, Saints and martyrs (see map). Three holy trees (Bers), each signifying a historical event or Sikh saint, stand. Inside the temple many memorial plaques commemorating past Sikh historical events, saints, martyrs and includes commemorative inscriptions of all the Sikh soldiers who died fighting in World War I and World War II.

Most people visit the Sikh Central museum near the main entrance and clock tower on their first visit. Anyone who wants to enter the Harmandir Sahib may do so, irrespective of religion, color, creed or sex. People must not drink alcohol, eat meat or smoke cigarettes or other drugs while in the shrine. People must dress appropriately and cover their heads as a sign of respect. Pilgrims remove shoes, followed by washing feet in the small pool of water, before entering the Harmandir Sahib premises. All Sikh temples (Gurdwaras) in the world follow the traditional rule of welcoming everyone to enter. 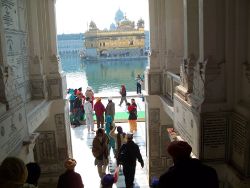 Four doors provide entrance to the Harmandir Sahib. In 1988, after Operation Black Thunder, the government acquired a narrow peripheral strip of land (including buildings) essentially creating a security belt. The government displaced and rehabilitated a large number of people in the process. 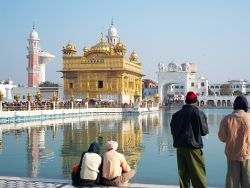 The project, meeting with strong resistance from the moderate as well as militant Sikh organizations, forced an abandoning of the plan. The murder of a senior Government engineer, connected with the project, prompted the abandonment of the plan. The Deputy Commissioner Karan Bir Singh Sidhu revived the project in 1993. Sidhu also had been appointed as the Project Director popularly described as the Galliara Project. He changed the concept of the periphery from that of a security belt to that of a second parikarma, creating a serene landscape fully consistent with the ethereal beauty of the Harmandir Sahib. Sidhu created the plan in quiet consultation with the SGPC. The pilgrims today can travel only by foot in the Galliara. 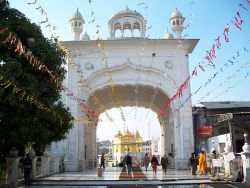 Much of the present decorative gilding and marble work dates to the early 1800s. Hukam Singh Chimni and Emperor Ranjit Singh, Maharaja of the Sikh Empire of the Punjab served as patrons for all the gold and exquisite marble work conducted. The Darshani Deorhi Arch stands at the beginning of the causeway to the Harmandir Sahib, standing 202 feet (62 m) high and 21 feet (6 m) in width. Emperor Ranjit Singh began the gold plating on the Harmandir Sahib, completed in 1830 C.E. The Sher-e-Punjab (Lion of the Punjab), a generous donor of wealth and materials for the shrine, won the affection by the Punjabi people in general and the Sikh community in particular. Maharaja Ranjit Singh also built two other sacred temples in Sikhism. Maharaja Ranjit Singh's generosity derived from his profound reverence for the tenth Guru of Sikhism, Guru Gobind Singh. The other two most sacred temples in Sikhism, which he built, include Takht Sri Patna Sahib (initiation or birth place of Guru Gobind Singh) and Takht Sri Hazur Sahib the place of Guru Gobind Singh's Sikh ascension into heaven. 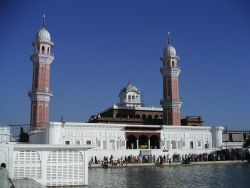 Vaisakhi, celebrated in the second week of April (13th usually), constitutes one of the most important festivals. Sikhs celebrate the founding of the Khalsa on that day, celebrated with fervor in the Harmandir Sahib. Other important Sikh religious days include the martyrdom day of Guru Teg Bahadur and birthday of Guru Nanak. Similarly Diwali stands out as one of the festivals which sees the Harmandir Sahib beautifully illuminated with Divas/Diyas (lamps) and fireworks. During those special occasions, one to two million pilgrims visit the Holy shrine named Harmandir Sahib. Most Sikhs visit Amritsar and the Harmandir Sahib at least once during lifetime, particularly during special occasions in their life such as birthdays, marriages or birth of their children. 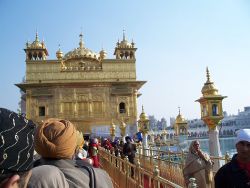 The Causeway to the Harmandir Sahib (Point 10 on map)

Prime Minister Indira Gandhi ordered the army to launch Operation Blue Star, leading to fierce fighting between Bhindranwale's supporters and the soldiers. Many of Bhindranwale's supporters, as well as many soldiers, died in the fighting. The Harmandir Sahib complex also suffered much damage from the fighting, especially the holy Sri Akal Takhat Sahib. Many Sikhs regarded the attack as a desecration of their holiest shrine, and their alienation had deep and dramatic consequences. Two of Indira Gandhi's bodyguards, both Sikhs, assassinated her the following October.[4]