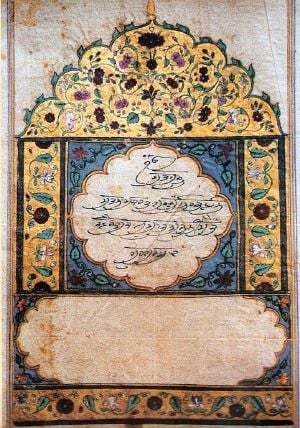 The Guru Granth Sahib (Punjabi: ਗੁਰੂ ਗ੍ਰੰਥ ਸਾਹਿਬ), also known as the Adi Granth, is the primary Holy Book of the Sikhs. and is consulted for religious guidance in all aspects of life.

Composed during the period of Sikh Gurus, from 1469 to 1708, the Guru Granth Sahib is a voluminous text of 1430 pages that was compiled by the fifth Sikh Guru, Guru Arjan Dev (1563-1606), from hymns of the previous Sikh Gurus and other great saints of the Hindu and Muslim traditions. The original scribe of the Adi Granth was Bhai Gurdas and later Bhai Mani Singh. After the demise of the tenth Sikh Guru many handwritten copies were prepared for distribution by Baba Deep Singh.

The Holy Book is organized in the form of hymns written in praise of God, which describe God's nature[1] and the right way to live. Written in the Gurmukhi script, the Holy Book contains many languages including Braj, Old Punjabi, Khariboli, Sanskrit and Persian.

Guru Gobind Singh (1666-1708), the tenth Guru in Sikh tradition, affirmed the sacred text Adi Granth as his successor, ending the line of human Gurus, and elevating the text to leadership of the Sikh community. From that point on, the text remained not only the holy scripture of the Sikhs, but is also regarded by them as the living embodiment of the their Ten Gurus.[2]

Meaning and role in Sikhism

Did you know?
The "Guru Granth Sahib" or "Adi Granth," the Holy Book of the Sikhs, is considered to be divine revelation

Sikhs consider the Guru Granth Sahib to be the highest authority within the community, and the Holy Book plays a central role in Sikh devotional and ritual life.[3] The place of the Guru Granth Sahib in Sikh devotional life is based on two fundamental principles or beliefs: first, the text is considered to be divine revelation,[4] hence it cannot be changed; second, all answers regarding religion and morality are believed to be be discovered within the text.

The hymns and teachings contained in the Sikh holy book are called Gurbani or "Word of the Guru" and sometimes Dhurbani or "Word of God." Thus, in Sikh theology, the revealed divine word is the Guru.[5] Because the scripture inherited this authority from Sikh Gurus, it is called Guru Granth, meaning "Guru Book."

The work of the numerous holy men who contributed to the Guru Granth Sahib is collectively referred to as Bhagat Bani or "Word of Saints." These saints belonged to different social and religious backgrounds, including Hinduism and Islam. Although the Sikh Bhagats (devotees/saints) are not accorded the status of Guru in Sikhism, their work is equally revered as that of Sikh Gurus and no distinction is made between the work of a Sikh Bhagat and a Sikh Guru. The essence of these doctrines is that the Guru Granth Sahib, which contains the complete teachings of the Sikh Gurus, is the sole and final successor of the line of Gurus. Anyone claiming the status of living Guru is considered a heretic.[6] 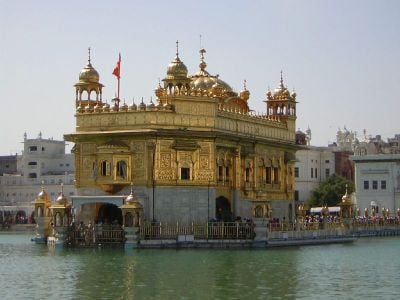 The Adi Granth was first installed in Golden Temple

The work of transcribing the teachings of Guru Nanak, the first Guru and founder of Sikhism, began during his lifetime.[7] When Guru Angad became the second Guru of Sikhs, Guru Nanak gave him his collection of hymns and teachings in the form of a "pothi" (manuscript). Guru Angad added 63 of his own compositions and subsequently handed the enlarged manuscript to the third Guru, Amar Das. Guru Amar Das prepared a number of manuscripts, which he supplemented with 974 of his own compositions, as well as the works of various Bhagats (devotees/saints). These manuscripts, known as Goindwal pothis, mention the message of Guru Amar Das as to why the Bhagat Bani was included and how the Bhagats were influenced by Guru Nanak.[7] The fourth Guru also composed hymns and preserved them in a pothi.

The fifth Guru, Arjan Dev, in order to consolidate the Bani (Divine word) of earlier Gurus and to prevent spurious compositions creeping into the original text, decided to compile the Adi Granth.[7] The ancient Sikh manuscript Tawarikh Guru Khalsa mentions that Guru Arjan Dev issued a Hukamnamah (official order), asking anyone who could contribute to do so. All of the sourcing and content of the Bani of the earlier Gurus as well as that of the Bhagats was reviewed. Guru Arjan Dev's examination of the text sought to order and affirm the authenticity of the existing revelation.[7] Guru Arjan started the work of compiling the Adi Granth early in 1599.[8]

The final prepared volume is known as Adi Granth, or "original volume." It was written by Bhai Gurdas, under the direct supervision of Guru Arjan, who dictated the text. It included the compositions of the first four Sikh Gurus, to which were added those of the fifth Sikh Guru, Arjan Dev. The Adi Granth also contained the compositions of 15 Bhagats, 17 Bhatts ("bards," or traditional composers), and four others such as Bhai Mardana, a lifelong companion of Guru Nanak.

The Adi Granth took five years to complete and was installed in Harmandir Sahib ("the abode of God"), popularly known as the Golden Temple, on September 1, 1604, with Baba Buddha as the first Granthi.[8] This original volume is presently in Kartarpur and bears the signature of the Guru Arjan.[9]

This master copy was initially in the possession of Guru Hargobind, but was stolen by one of his grandsons, Dhir Mal, who wanted to lay claim to the title of Guru of Sikhs. The Sikhs, about 30 years later, recovered it forcibly and were made to return it on the order of the ninth Guru, Tegh Bahadur. Every year on the occasion of Vaisakhi the original Adi Granth, known as Kartarpur pothi, is displayed by the descendants of Dhir Mal in Kartarpur. 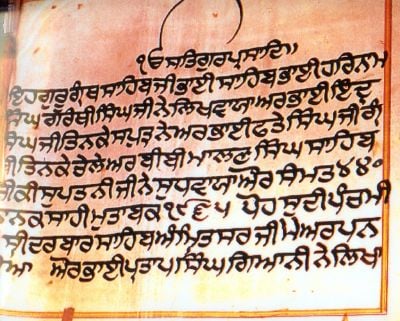 The end part of the handwritten Adi granth, by Pratap Singh Giani, located on the first floor of Harimandir Sahib

The Sikh Gurus developed a new writing system, Gurmukhi, for writing their sacred literature. Although the exact origins of the script are unknown,[11] it is believed to have existed in an elementary form during the time of Guru Nanak. According to Sikh tradition, Guru Angad is said to have invented the script and popularized its use among the Sikhs. It is stated in Mahman Prakash, an early Sikh manuscript, that the script was invented by Guru Angad at the suggestion of Guru Nanak during the lifetime of the founder.[12] The word "Gurmukh" translates as "from the mouth of the Guru." The script was used, from the onset, for compiling Sikh scriptures. The Sikhs assign high degree of sanctity to Gurmukh language script.[13] The Gurmukh language Script is also the official script for the Indian State of Punjab.

The Guru Granth Sahib is divided into fourteen hundred and thirty pages known as Angs (limbs) in Sikh tradition. The composition is divided on the basis musical settings called Ragas.[14]

The structural composition of Guru Granth Sahib can be divided into two different sections:

A raga is a complex structure of musical melody used in Indian classical music. It is a set of rules of how to build a melody which can ignite a certain mood in the reciter and listeners. The Guru Granth Sahib is composed in and divided by 60 ragas. Each raga is a chapter or section, starting with Asaa raag, and all the hymns produced in Asaa raag are found in this section ordered chronologically by the Guru or other Bhagat that have written hymns in that raga. 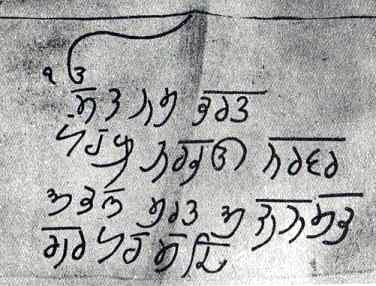 The Mool Mantar in the handwriting of Guru Har Rai

Sikhs observe total sanctity of the text in the Guru Granth Sahib. No one can change or alter any of the writings of the Sikh Gurus written in Guru Granth Sahib. This includes sentences, words, structure, grammar etc. This total sanctity was observed by the Gurus themselves. Guru Har Rai had disowned his elder son, Ram Rai, because he had altered the wording of one of Guru Nanak's hymn.[15] Ram Rai had been sent to Delhi, by Guru Har Rai, to explain Gurbani to Mughal Emperor Aurangzeb. In order to please the Emperor he altered the wording of hymns of Guru Nanak. The matter was reported to the Guru, who was displeased with his son and disowned him. Later when aged, Ram Rai was forgiven by Guru Gobind Singh. 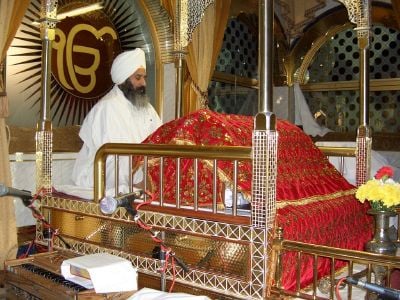 The Guru Granth Sahib is always the focal point in any Gurudwara. It is attended with all signs of royalty, as was the custom with Sikh Gurus, and is placed upon a throne and the congregation sits on the floor. It is waved upon by a chaur (type of fan) which is made of fine material and a canopy is always placed over it. The devotees bow before the Guru and offer Karah Prashad (sacred food) or money to it.[16]

The Guru Granth Sahib is taken care of by a Granthi. He is responsible for reciting hymns from Guru Granth and leading the Sikh congregation in prayer. The Granthi also acts as the caretaker of Guru Granth Sahib. An important function of the Granthi is to put Guru Granth Sahib to bed every night. Before doing this, he must recite the night prayer known as Kirtan Sohila, which is composed by Guru Nanak, the founder of Sikh religion. Guru Granth Sahib is placed in a bed known as Manji Sahib, and covered with soft quilts and clean cloths. Small cushions are also placed alongside to support its large size. It is kept covered in silken cloths, known as Rumala, to protect from heat, dust, pollution etc. It rests on a manji sahib under a rumala until brought out again.[16]

The Guru Granth Sahib provides guidance and advice to the whole of the human race about how to live a life in peace, tranquility and spiritual enlightenment. Its main themes are as follows:

Care and Protocol to be Observed

Any person in the presence of the Adi Granth must observe the following:

While the Guru is being transported the following protocol is to be observed: