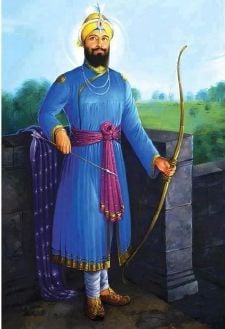 Guru Gobind Singh, the tenth Guru of Sikhism, who founded the Khalsa (community of soldier-saints).

Khalsa (Punjabi: ਖਾਲਸਾ, literally "Pure") refers to the collective body of all baptized Sikhs. The Khalsa was originally established as a military order of "saint-soldiers" on April 13, 1699, by Guru Gobind Singh, Sikhism's tenth Guru, and included all his baptized disciples in the Amrit Sanchar ceremony. A Sikh who has been initiated in Khalsa is known as an Amritdhari, or Khalsa Sikh, in distinction to a Sahajdhari (non-baptized Sikhs). Guru Gobind Singh introduced the obligatory Five Ks for the Amritdhari as visible symbols of the Khalsa to clearly display their commitment. In contrast, Sahajdhari Sikhs are not required to don all the Five Ks although each group of Sikh's reveres the teachings of the Guru Granth Sahib (Sikhism's Holy Book and Living Guru).

Guru Gobind Singh created the Khalsa to inspire the Sikh community in the face of oppression and persecution. Inductees of the Khalsa were expected to have the courage, will and the strength to fight oppression (symbolized by the sword). These values are still esteemed by Sikhs today. In contemporary Sikhism, worship services held at Gurdwaras (Sikh temples) throughout the world regularly repeat the phrase, "Waheguru ji ka Khalsa, Waheguru ji ki Fateh" ("The Khalsa belongs to God, the victory belongs to God").

The word Khalsa is derived from Arabic word khālisa[h] خالصة ("pure/devoted").[1][2] In Sikh tradition, the term first appears in a hukmanama (order) by shri Guru HarGobind (the sixth Guru), which refers to a sangat as "Guru ka khalsa" ("Guru's Khalsa"). It also appears in a letter by Guru Tegh Bahadur (the ninth Guru), in the same sense.

Although the early Mughal emperors had peaceful relations with the Sikh Gurus, the Sikhs started facing religious persecution during the reign of Jahangir. Guru Arjan Dev, the fifth Guru, was arrested and executed by Jahangir in 1606.

In 1675, Guru Tegh Bahadur, the ninth Guru of the Sikhs was executed by the Mughal emperor Aurangzeb. In 1699, his son and the tenth Guru, Gobind Singh decided to establish a military order to stage resistance against the Mughals. He sent hukmanamas (letters of authority) to his followers throughout the region, requesting them to congregate at Anandpur on 13 April 1699, the day of Baisakhi (the annual harvest festival).[3]

Guru Gobind Singh addressed the congregation from the entryway of a tent pitched on a hill (now called Kesgarh Sahib). He drew his sword and asked for a volunteer who was willing to sacrifice his head. No one answered his first call, nor the second call, but on the third invitation, a person called Daya Ram (later known as Bhai Daya Singh) came forward and offered to be beheaded by the Guru. Guru Gobind Singh took the volunteer inside the tent, and emerged shortly thereafter, with blood dripping from his sword. He then demanded another head. One more volunteer came forward, and entered the tent with him. Guru again emerged with blood on his sword. This happened three more times. Then the five volunteers came out of the tent unharmed. These five, who were willing to sacrifice their lives for their Guru, were called Panj Piare ("the five beloved ones").[3] These five volunteers were the first Khalsa Sikhs: Daya Ram (Bhai Daya Singh), Dharam Das (Bhai Dharam Singh), Himmat Rai (Bhai Himmat Singh), Mohkam Chand (Bhai Mohkam Singh), and Sahib Chand (Bhai Sahib Singh).

Guru Gobind Singh Ji did not actually kill these disciples but used them as an example of courage to inspire the community. Their dedication symbolized the nature of inductees in the Khalsa: they must have the will and the strength to fight oppression (symbolized by the sword), but must always remember that their actions are born from protection and not hatred (symbolized by the sweetness of the sugar), used in the amrit (nectar) given to the inductees.

The Panj Piare were thus the first baptized Sikhs, and became the first members of the Khalsa brotherhood, who symbolically regard Guru Gobind Singh as their "father," and Mata Sahib Kaur as their "mother".[3] Guru Gobind Singh gave them all the surname "Singh" (meaning "lion") over their original surnames (which indicated the caste that they originally belonged to) to symbolize the caste-less nature of the order, and indeed of the religion itself. Similarly, every subsequent male who takes the ceremony are also given the surname "Singh," and every female is given the name "Kaur" (meaning "princess," but originally it meant "prince" this was given by Guru Nanak Dev Ji so as to remove distinction between sexes, and bring about equality); the collective body of whom is called the Khalsa.

Guru Gobind Singh describes in his book, the Sarbloh Granth the qualities of Khalsa:

Initial tensions with the non-Khalsa disciples

With the creation of Khalsa, Guru Gobind Singh had abolished all existing social divisions as per teaching of Guru Nanak. In their new order, the lowest of the low would stand with the highest, all would become one and drink from one vessel.[5]

Ghulam Mohyiuddin, an agent of the Mughal government, reporting to the Emperor wrote:

"He has abolished caste and custom, old rituals, beliefs and superstitions of the Hindus and bonded them in one single brotherhood. No one will be superior or inferior to another. Men of all castes have been made to eat out of the single bowl. Though orthodox men have opposed him, about twenty thousand men and women have taken baptism of steel at his hand on the first day. The Guru has also told the gathering: "I'll call myself Gobind Singh only if I can make the meek sparrows pounce upon the hawks and tear them; only if one combatant of my force faces a legion of the enemy.""[6][7]

Sri Gur Sobha (eighteenth century) by Sainapati (Saina Singh) contains two sections (adhyays) on the controversies that arose when Guru Gobind Singh's disciples in Delhi heard the news of his new order.[8] Much of the controversy stated in Sri Gur Sobha revolves around bhaddar, the ritual shaving of head after death of a close relative, which was discouraged by Guru Gobind Singh. According to Sainapti, while creating the Khalsa, Guru Gobind Singh said that bhaddar is bharam (illusion), and not dharam.[8]

Tensions developed between the Punjabi Khatri disciples of the Guru in Delhi, and members of the newly-formed Khalsa. A prominent Khatri disciple was expelled from the place of worship (dharmasala) for refusing to join the Khalsa. Another disciple was expelled for eating with him, starting a chain of further expulsions.[8] The expelled disciples convened a community gathering, at which two wealthy Khatris demanded that the Khalsa produce a written order from the Guru that a new mandatory code of conduct had been promulgated. A Khatri family that refused to follow the bhaddar ritual was boycotted by the Khatri community.[8] The Khatri council (panch) closed the bazaar (market) to pressurize the Khalsa. The Khalsa petitioned the state officials to intervene, who forced reopening of the shops. Later, peace was established between the two groups in a sangat (congregation). However, hostility between some Khatris and the Khalsa persisted in the later years.[8]

Another rift between the Khalsa and some other Nanak Panthi groups seems to be the Khalsa's firm adherence to the doctrine that Guru Gobind Singh had ended the line of human Gurus, declaring the Adi Granth as the next Guru. Some eighteenth century Sikhs extended the line of Gurus to include Banda Bahadur, Mata Sundari, Mata Sahib Kaur, Mata Sundari's adopted son (Ajit Singh) and grandson (Hathi Singh).[8]

Khalsa as a military force

One of the duties of a Khalsa was to practice arms and be ready to defend the weak. This was deemed necessary due to the rising religious persecution from zealous Islamic Mughal rulers. In this context, the Khalsa rose as a group as saint-warriors to withstand the Mughals.

After the death of Guru Gobind Singh, his disciple Banda Singh Bahadur led the Khalsa warriors in an uprising against the Mughals. Banda Singh Bahadur first established a Sikh kingdom when he defeated the Mughals at Sirhind. He and his comrades were eventually defeated and executed, but he became an icon among the Khalsa Sikhs. By the late 1730s, the Khalsa regrouped as a military force under Nawab Kapur Singh, who gathered local chieftains and created Dal Khalsa, a coalition army.[9] The Dal Khalsa fought with the Mughals and the Afghans, eventually resulting in the establishment of a Sikh kingdom in the Punjab region.

After the fall of the Mughal empire and the later establishment of a Sikh state in Punjab, the Khalsa became an instrument of the Punjab Maharajas: the Khalsa was a democratic body, and could oppose the Maharaja. By the death of Ranjit Singh in 1839, the regular army of Punjab was assessed by Sir Lepel Griffin at 29,000 men, with 192 artillery guns.[10] The irregular levies were estimated at a similar number.

Today, the Khalsa brotherhood is respected by the entire Sikh community; however, not all Sikhs are Amritdharis.[3] The issue of Khalsa code of conduct has led to several controversies. In the early 1950s, a serious split occurred in the Canadian Sikh community, when the Khalsa Diwan Society in Vancouver elected a clean-shaven Sikh to serve on its management committee.[13] Although most of the early Sikh immigrants to Canada were non-Khalsa, and a majority of the members of the society were clean-shaven non-Khalsa Sikhs, a faction objected to the election of a non-Khalsa to the management committee. The factions in Vancouver and Victoria broke away from the Khalsa Diwan Society, and established their own gurdwara society called Akali Singh.[13]

A Khalsa needs to follow rules and codes of conduct set by Guru Gobind Singh. The "Reht Maryada" (code of conduct) is based upon guidelines laid down by Guru Gobind Singh in 1699. All Khalsa Sikhs are Sahajdharis (non-baptized Sikhs) at some point in their life. In Sikhism, the children are not baptized at birth because the ceremony requires the individual to become a Khalsa Sikh by free will. The person aspiring to join the Khalsa must be able to speak, read and recite from the Sikh scriptures. All Khalsa Sikhs must follow a very strict code of conduct for the rest of their lives. As Khalsa, all Guru Gobind Singh's codes of conducts and daily religious practices must be followed for life with no infraction (exceptions being allowed only if the person is so ill or unwell that daily prayers cannot be performed). Since the initiation into the Khalsa is a serious step, only a person mature enough to understand and accept the Khalsa way of life should undertake it. 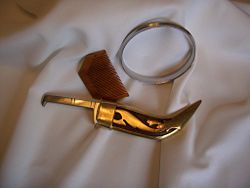 A kaṛā, kaṅghā and kirpān - three of the five articles of faith endowed to the Sikhs.

The Five Ks, or panj kakaar/kakke, are five items of faith that all Khalsa are required to wear, at the command of the tenth Sikh Guru. They are as follows:

These symbols represent the ideals of Sikhism, such as honesty, equality, fidelity, meditating on God, and never bowing to tyranny,[15] and for helping/protecting the weak, and self defense.

Retrieved from https://www.newworldencyclopedia.org/p/index.php?title=Khalsa&oldid=1081115
Categories:
Hidden category:
This page was last edited on 6 October 2022, at 03:34.
Content is available under Creative Commons Attribution/Share-Alike License; additional terms may apply. See Terms of Use for details.