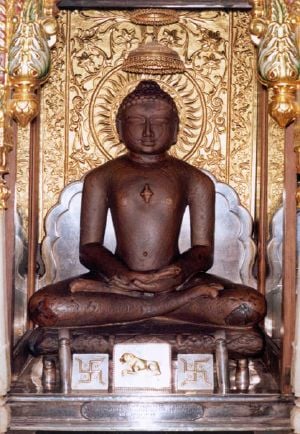 A statue of Mahavira at Shri Mahaveerji temple in Rajasthan, India.

Mahavira (599 – 527 B.C.E.) (meaning: "'Great Hero") is a central figure in the religion of Jainism, revered as the twenty-fourth and most recent Tirthankara ("Crosser of the stream of Samsara"). His philosophical teachings are said to have restored the religion of Jainism to greater purity that helped to promulgate its central tenets. Mahavira was likely a contemporary of Siddhartha Gautama (the Buddha), and he challenged the authority of early Vedic Hinduism's faith in the practice of animal sacrifices, thereby breaking away from tradition.

Mahavira's later life was an example of rigorous asceticism. He formed his own monastic community, which subsequently divided into different schools. The two major schools of Jainism, Śvetāmbaras and Digambaras respectively, dispute much about the life of Mahavira, but share a great deal of common ground concerning his teachings.

Many details about Mahavira's biography are gleaned from the Jain work, Acaranga, which is part of the Kalpasutra text (c. 100-200 C.E.). An important part of the Acaranga is the "Pillow Scripture" or Uvahanasuya, which focuses a great deal on the life of the teacher. 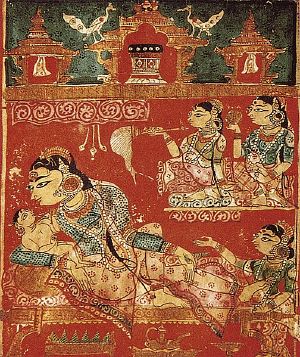 The birth of Mahavira, from the Kalpa Sūtra

It is said that Mahavira was born in the ancient Kingdom of Vaishali, now a district of Bihar state, India. He died in Pavapuri, also in Bihar state. He was known as "Vardhamana" (meaning "increasing") because it is said that his family's wealth grew after his conception. A growth of everything good was also noticed in the kingdom, like the bloom of beautiful flowers.

After his birth, Mahavira allegedly was taken by the Hindu God, Lord Indra to bathe in the celestial milk and perform the ritual befitting a future Tirthankara. He was then returned back to his mother, who had dreamed of fourteen auspicious symbols before giving birth to her son. It was a sign to tell her to prepare for the advent of a great soul. Śvetāmbara sources include further stories associating Mahavira with Indra. The embryo that would become Mahavira was, according to legend, transferred from the womb of a Brahmin mother (Devānandā) into the womb of Mahavira's kshatriya mother Trisala by the god Indra. The reason for this transfer was two-fold: traditionally, tirthankaras are born in the kshatriya class, and Devānandā's husband expressed a desire for his son to learn the Vedas, an activity not granted esteem in Jain tradition. This association with Indra is disputed by Digambaras.

Being the son of Queen Trisala and King Siddartha (not to be confused with the historical Buddha named Siddartha Gautama), Mahavira lived the life of a prince. In later Jain literature his parents are described as devotees of Parshva, the twenty-third tirthankara of Jainism. In time he married Yaśodā, a princess, and had a daughter. It is claimed by Jains that Mahavira caused his parents no grief or pain throughout their entire lives. At the age of thirty, following the deaths of his parents, he left his family, gave up his worldly possessions, and spent twelve years as an ascetic. At one point, it is said that Mahavira had more than 400,000 followers, though this figure comes from a later Jain document and may have been exaggerated.

The dates of Mahavira's death are disputed. Shevtambara Jains say he passed away in the year 527 B.C.E. at the age of 72. Digambaras say the date 510 B.C.E. is more accurate. Western scholars favor a dating of 549 B.C.E. to 477 B.C.E., based on a comparison of literary sources. Many Jains consider Dipavali, the last day of the Hindu and Jain calendars, as the anniversary of his death and, accordingly, the day he attained siddha loka (enlightenment). His birthday is celebrated as Mahavir Jayanti.

A few centuries after Mahavira's death, the Jain religious order (Sangha) divided over different interpretations of the nature of the sangha, female inclusion in monasteries, and the role of clothing. Later generations saw the introduction of ritualistic complexities that some have criticized as almost placing Mahavira and other Tirthankaras on the thrones of Hindu deities.

After renouncing his princely status, Mahavira spent the next twelve and half years in deep silence and meditation seeking to conquer his desires, feelings, and attachments. He carefully avoided harming or annoying other living beings including animals, birds, and plants. Legend tells us, however, that he suffered from the elements, including animals and insects. He also went without food for long periods. It is of note, however, that the earliest sources do not indicate any supernatural obstacles—Mahavira struggles against nature and hostile human beings, but never against demons. His victory over these obstacles and his enduring calm and peaceful character against all unbearable hardships is reflected in his title, Mahavira (a Sanskrit word, meaning very brave and courageous), given to him by his peers (though later attributed to the gods). After this twelve and a half year period, Jains believe that he attained kevala, or perfect enlightenment, in which perfect perception, knowledge, power, and bliss are said to be realized.

Mahavira spent the next thirty years traveling around India teaching the people the central doctrines of Jainism. The ultimate objective of his teaching was to explain how one can attain total freedom from the cycle of rebirth to achieve the permanent blissful state. Mahavira attracted people from all walks of life, rich and poor, kings and commoners, men and women, princes and priests, touchable and untouchable. He organized his followers into a four-fold order, namely monk (Sadhu), nun (Sadhvi), layman (Shravak), and laywoman (Shravika). This order is known as Chaturvidh Jain Sangh.

Mahavira's sermons were orally compiled by his immediate disciples in the Agam Sutras. These Agam Sutras were orally passed on to future generations. In the course of time, many were lost, destroyed, or modified. Approximately one thousand years after the death of Mahavira, it is said that the Agam Sutras were written down on palmleaf paper as a record of his teachings. Śvetāmbara Jains have accepted these sutras as an authentic version of Mahavira's teachings.

Jainism, according to Jain tradition, existed before Mahavira, and his teachings are believed to be based on those of his predecessors. Thus in Jain thought Mahavira was more of a reformer and propagator of an existing religious order than the founder of a new faith. It is said that he followed the well-established creed of his predecessor Parshva. However, Mahavira did rearticulate the philosophical tenets of Jainism to correspond to his times.

The teachings of Mahavira, like any religious teacher, were not formulated in an ideological vacuum. The prevailing worldview of his time and place—including ideas of reincarnation, karma, deities and souls—were fully integrated into his philosophy, though interpreted differently to reflect his unique approach to the questions of his culture and era.

Mahavira preached that every living being is in bondage of karmic atoms that are accumulated by good or bad deeds. Under the influence of karma, the soul is habituated to seek pleasures in materialistic belongings and possessions, which are the deep rooted causes of self-centered violent thoughts, deeds, anger, hatred, greed, and such other vices. These result in further accumulation of karmas.

To liberate one's self, Mahavira taught the necessity of right faith (samyak-darshana), right knowledge (samyak-jnana), and right conduct (samyak-charitra'). At the heart of right conduct for Jains monks lie the five great vows:

Monks and nuns are held to follow these vows strictly and totally, while the common people may follow the vows as far as their life styles will permit. Mahavira, following his enlightenment, set up a religious community that specifically included male clergy, female clergy, male laity, and female laity. This religious community, like the corresponding Buddhist sangha, did not discriminate based on social class, but rather accepted all that willing to adhere to Jain principles. In the matters of spiritual advancement, as envisioned by Mahavira, both men and women were on an equal footing and were taught by Mahavira that they may equally renounce the world in search of ultimate happiness. However, later Jain communities debated the role of women in the monastic community and they were rejected by the Digambara sect.

Important to the Jain worldview are the ideas of "Nayavada," Anekantavada, and Syadvada, translated roughly as "many-pointed-ness," "non-absolutism" and "maybe-ness or relativity." "Nayavada" is the theory that a statement can be accurate only if it reflects the seven nayas, viewpoints from which reality is described. Anekantavada can be understood as a form of conceptual non-violence whereby views are not forced on others. Syadvada is the expression of the realization that reality is ultimately indescribable and thus any descriptions are always relative to time, place and perspective.

These ideas were developed fully in the centuries following Mahavira's death—the seven nayas, for instance, are found in their standard form in the fourth century C.E. work of the Jain philosopher Mallavadin. These philosophical concepts were valuable in debates among Jains and their Hindu and Buddhist contemporaries, and were used to demonstrate the alleged superiority of Mahavira's thought by recognizing the limitations of others' perspectives. However, the seeds of anekantavada and syadvada were likely present in Mahavira's teachings—they can be thought of as the logical extension of ahimsa brought into the intellectual realm; that is, they are the practice of not harming the ideas of others by recognizing the possibility of multiple perspectives.

Also found in early Jain works is an emphasis on the independence of the practitioner. Though Mahavira organized a community of believers, he also stressed the idea that the individual was responsible for his or her own salvation.

Mahavira lived in a time with an already firmly established religious order and system of ethics. Like his contemporary the Buddha, and other religious innovators, he rejected specific elements of this system and suggested his own. A major addition to Indian thought traced to Mahavira is the teaching of ahimsa, meaning "non-violence" or "non-injury." The prevailing religious tradition of the time was Vedic Hinduism and during this phase in Hinduism's development animal sacrifice was a common ritual. Though not alone in his protest of this action, the prohibition against the killing of any being became central to Jainism and still exists today. Eventually the act of animal sacrifice fell out of practice among the majority of Hindus, as the idea of ahimsa gained currency and ascendancy in that religion as well.

The religion that Mahavira promulgated continues to survive. The number of adherents worldwide is estimated at approximately three million, most of whom reside in India. Though Jains are a minority in India, the religion is widely recognized by both private and public institutions, and the study of Jainism ("Jainology") is a legitimate pursuit in higher circles of education. Certainly the teachings of Mahavira continue to be significant, as seen in the devotion and interest shown in him and his thought thousands of years after his death.