In Islamic eschatology the Mahdi (مهدي transliteration: Mahdī, also Mehdi; "Guided One") is the prophesied redeemer of Islam. The advent of Mahdi is not a universally accepted concept in Islam and among those that accept the Mahdi there are basic differences among different schools of about the timing and nature of his advent and guidance. Most Muslims believe that the Mahdi will change the world into a perfect and just Islamic society alongside Jesus before Yaum al-Qiyamah (literally "Day of the Resurrection" or "Day of the Standing"). The "hdi" of "Mahdi" refers to the Arabic root "هدی" which means "to guide." "Mahdi" is also an Arabic name. The Mahdi will assist Jesus in defeating the Dajjal, who represents evil. The concept of Mahdi is not explicitly mentioned in the Qu'ran, but the sayings of Muhammad on Imam Mahdi abounds. For some Muslims, the events of the end time and figures such as the Mahdi and the Dajjal are real. For others, the end-time scenario is symbolic of the eternal battle in all people as well as in society between good and evil, and of the conviction that good can triumph.

Twlver Shi’a regard the Mahdi is their twelfth Imam, as evidenced in a hadith from the Shia text (Kitab Al-Kafi) containing a conversation between the first Shia Imam Imam Ali ibn Abu Talib and a man named al-Asbagh ibn Nubata.

In a hadith widely regarded as authentic, Muhammad said,

Even if the entire duration of the world's existence has already been exhausted and only one day is left before the Day of Judgment, God will expand that day to such a length of time, as to accommodate the kingdom of a person out of Ahl al-Bayt who will be called by my name. He will then fill the Earth with peace and justice as it will have been filled with injustice and tyranny before then.[1]

The Mahdi, according to Shi'ite tradition, will arise at some point before the day of judgement, institute a kingdom of justice, and will in the last days fight alongside the returned Jesus against the Dajjal, the Antichrist.

However, like most religious concepts, various Muslim traditions have ascribed different characteristics to the Mahdi. Also, as Mahdiism is closely related to the leadership of the Ummah, it has had the potential to be abused as some leaders of secularly focused politico-religious movements in the name of Islam who have claimed to be the Mahdi.

Of those Sunnis that hold to the existence of the Mahdi, some believe the Mahdi will be an ordinary man, born to an ordinary woman. Umm Salamah said:

I heard the Messenger of Allah (Peace be upon Him) say: ‘The Mahdi is of my lineage and family…’[2]

The Shi'a belief is that Mahdi has been alive and in occultation for 1200 years and is eleven generations down from Muhammad, i.e. the twelfth Shi'a Imam Muhammad al-Mahdi.

The Events of the End Time

The representative of Satan, the Dajjal, the great deceiver will make his last stand in Jerusalem, where the faithful will take refuge in the Rock. He will rule for either 40 days or 40 years, before in a final confrontation with Jesus and the Mahdi, he suffers defeat. Then, the reign of peace and justice begins.

The coming of the Mahdi is a disputed notion within Sunnis, with the claim being denied by some Muslims who regard the Qur’an as the sole authority in Islam. Mahdi is not mentioned in the Qu'ran and although there are not few authentic hadiths that mention him in detailed.

Although the concept of a "Mahdi" is not reported in Sahih al-Bukhari or Muslim, it is found in Sunan Abi Dawud, Ibn Majah and Tirmidhi and agreed upon by Sunni scholars as sound and trustworthy (saheeh and thiqat sanad). Others point out that the hadith related to the Mahidi, however, are attested by numerous narrators, and are classed as mutawatir, as are the hadith concerning the Dajjal and the descent of Jesus the son of Mary.

The Naqshbandi Haqqani Sufi Order, under the leadership of Shaikh Hisham Kabbani of Islamic Supreme Council of America (ISCA), is among the Sufis who strongly believes the coming of Imam Mahdi in this twenty-first century is imminent. Shaikh Hisham has written a book "The Approach of Armageddon" that touches much on this subject according to Sunni doctrine and beliefs. 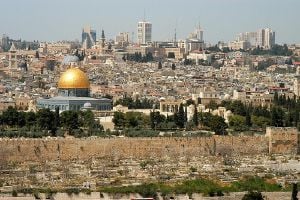 Jerusalem from the Mount of Olives, the venue of the confrontation between ad-Dajjal, the Mahdi and Jesus in Muslim eschatology. The Righteous will seek sanctuary in the Rock, beneath the Dome.

Claims of being the Mahdi

Over the course of history, there have been several individuals who have declared themselves to be the Mahdi prophesied in Islam. Similar to the notion of a Messiah in the Judeo-Christian religions, the notion of a Mahdi as a redeemer to establish a society has lent itself to various interpretations leading to different claims within minorities or by individuals within Islam.

The first historical recorded reference to a movement using the name of Mahdi is al-Mukhtar's rebellion against the Umayyad Caliphate in 686, almost 50 years after Muhammad's death. Al-Mukhtar claimed that Ibn al-Hanifiya, a son of the fourth Caliph Ali (the first Imam of Shi'ite), was the Mahdi who would save the Muslim people from the unjust rule of the Umayyads. Ibn al-Hanifiya was not actively involved in the rebellion, and when the Umayyads successfully quashed it, they left him undisturbed. Shah Ismail I founder of the Safavid Empire was thought to be the Mahdi. Muhammad Ahmad , the Mahdi of the Sudan, was recognized by his followers as the Mahdi.

Some regard the society that the Mahdi will establish as a utopia on earth. For some, the world as it currently exists will end to be replaced by a different type of reality. For some, what is important about the expectation of an ideal society is that humans can, by being the "best community" of which the Qur'an speaks (Q3: 110), and by obeying God (refrainig from wrong and doing what is right), achieve this.

The Mahdi in fiction

Many authors have used the concept of the Mahdi in fictional stories. Perhaps the best known is Frank Herbert, whose Dune science fantasy novels centered on the character of Paul Atreides.

Hadith about the Mahdi

In the light of traditions and interpretations, the personality of the Promised Mahdi would be as such:

Retrieved from https://www.newworldencyclopedia.org/p/index.php?title=Mahdi&oldid=1085749
Categories:
Hidden category:
This page was last edited on 5 November 2022, at 05:27.
Content is available under Creative Commons Attribution/Share-Alike License; additional terms may apply. See Terms of Use for details.