Badge of the Duke of Wellington's regiment

The Dukedom of Wellington, derived from Wellington in Somerset, England is a hereditary title and the senior Dukedom in the Peerage of the United Kingdom. The first holder of the title was Arthur Wellesley, 1st Duke of Wellington (1769–1852), the noted Irish-born British career officer and statesman—unqualified references to the Duke of Wellington almost always refer to him. He is most famous for, together with Blücher, defeating Napoleon at Waterloo. Wellington served two terms as Prime Minister. It was during his premiership that Catholics were granted civil rights.

Wellington is considered to have been one of the greatest British generals in history. Wellington served his country with distinction on and off the field of battle. In addition to the many honors and distinction that Wellington received, rubber boots used in wet weather, or Wellington boots, are also named after him.

The Dukes of Wellington also hold the foreign titles of Prince of Waterloo (Orange dynasty's United Kingdom of the Netherlands, after the battle field in the part that would became Belgium, 1815), Duque de Ciudad Rodrigo (Spain, 1812), Duque de Vitória ("Duke of the Victory"—Portugal 1812) and Marquês de Torres Vedras ("Marquis of Torres Vedras"—Portugal, 1812) and Conde de Vimeiro ("Earl of Vimeiro"—Portugal, 1811). These were conferred on the first Duke as victory titles for his distinguished services as victorious commanding general in the Peninsular War (in Spain and Portugal) and at the Battle of Waterloo.

The family seat is Stratfield Saye, near Basingstoke, Hampshire. Apsley House, in London, is now owned by English Heritage, although the family retain an apartment there. 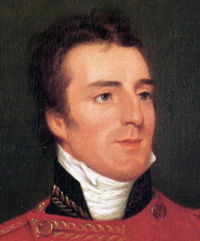 Born in Ireland, Arthur Wellesley attended Eton College and then studied in Belgium. He was not a promising student and it is said that his family despaired that he would make anything of his life. In 1787, his family solved the problem by buying him a military commission, a not uncommon practice for members of the aristocracy. As he was not the oldest son, he would not inherit the family estate. After serving a term on the staff of the Lords Lieutenant of Ireland he was promoted to lieutenant. From 1890, he was also a member of the House of Commons, where his family controlled a seat. With this advantage, he was able to buy promotion. By 1793 he was a Lt. Colonel, although he had no actual military experience.

In 1794 and 1795 he experienced some action, at least as an observer and in 1796, now a full Colonel, he was posted to India. His brother, Richard, followed him there as Governor-General a year later. He saw action in India and distinguished himself in the field, winning a series of engagements in the Fourth Anglo-Mysore War (1798) against the ruler of Mysore, Tipu Sultan. He also served as a provincial governor in Seringapatam and Mysore. In that position, he proved himself to be a competent administrator, introducing reforms to both the taxation and the judicial systems. In 1805, he was created a Knight of the Order of the Bath, a senior knighthood. Having proved himself as a soldier, he saw action in Germany (1895) and in Denmark (1806) before being again elected to the House of Commons. He was made a Privy Councilor in 1807 and for two years was Chief Secretary for Ireland.

Wellington could attack bravely against superior forces but was also a good tactician, using his artillery at close range where it was most effective and often keeping reserves ready out of enemy sight. He was largely untrained, having purchased his commission, so learned in the field and from study of other battles.

In 1799, Napoleon emerged as leader of the French revolution and began his expansionist project. Wellesley was dispatched to Portugal to fight the French there. He won the battle of Vimeiro (1808) but was recalled to London to defend himself following controversy about the terms of French surrender. He was cleared of the charge of having been too generous and, reassigned to Portugal, he promptly inflicted a defeat against the French, who then regrouped causing his troops to retreat. Subsequently Wellesley proved that he could defend as well as attack, successfully defending Lisbon in 1810 by building earthworks and defeating the French again in 1811. A year later, he was promoted to General. Other victories followed, including the liberation of Madrid for which he was awarded the titles of marquis and Duke of Wellington.

Finally, in 1814 he defeated the French at Toulouse, after which Napoleon was exiled on the island of Elba. Following Napoleon's escape from Elba in 1815, and his return to power, Wellington faced him at Waterloo. After fierce fighting, the Prussian general Gebhard Leberecht von Blücher arrived unexpectedly and Napoleon was routed.

Success on the field of battle was followed by success in politics. In 1828, he became Tory Prime Minister, serving until 1830, when he was succeeded by a Whig Prime Minister, Earl Grey. In 1834 he served as acting Prime Minister between November and December. Before his retirement in 1846, he held several cabinet posts including Foreign Secretary and Leader of the House of Lords, as well as holding the post of commander-in-chief. He died in 1852. Laid to rest in St Paul's Cathedral as one of England's greatest generals, he was buried alongside the greatest British Admiral, Lord Horatio Nelson.