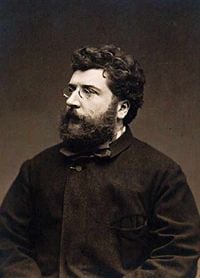 Georges Bizet (October 25, 1838 – June 3, 1875) was a French composer and pianist of the romantic era. He composed numerous piano pieces, a symphony, and several operas, his best loved being the opera, "Carmen." Ill-received in the beginning due to its strong dramatic content of destructive love and mad jealousy, "Carmen" went on to become one of the most widely produced and appreciated works of opera. Tragically, Bizet died a few months after the opera opened, while it was still struggling for recognition. Critical acclaim for "Carmen" began to accumulate a few years later.

Bizet showed the good and evil in life through his unique characters in the operas "Carmen" and "L'Arlesienne." It was his way of using the beauty of melody and harmony to capture the hearts of the people of Paris and later the world.

Bizet was born in Paris, France at 26 rue de la Tour d'Auvergne. He was registered with the legal name Alexandre-César-Léopold Bizet, but was baptized Georges Bizet and was always known by the latter name. He entered the Paris Conservatory of Music two weeks before his tenth birthday.

His first symphony, the Symphony in C Major, was written there when he was 17, evidently as a student assignment. It seems that Bizet completely forgot about it himself, and it was not discovered again until 1935, in the archives of the Conservatory library. Upon its first performance, it was immediately hailed as a junior masterwork and a welcome addition to the early Romantic period repertoire. A delightful work (and a prodigious one, from a 17-year-old boy), the symphony is noteworthy for bearing an amazing stylistic resemblance to the music of Franz Schubert, whose work was virtually unknown in Paris at that time (with the possible exception of a few of his songs). A second symphony, Roma was not completed.

In 1857, a setting of the one-act operetta Le docteur Miracle won him a share in a prize offered by Jacques Offenbach. He also won the Music Composition scholarship of the Prix de Rome, the conditions of which required him to study in Rome for three years. There, his talent developed as he wrote such works as the opera Don Procopio. Apart from this period in Rome, Bizet lived in the Paris area all his life.

His mother died shortly after his return to Paris. He composed the opera Les pêcheurs de perles (The Pearl Fishers) for the Theatre-Lyrique in 1863, which was an initial failure. He followed it with La jolie fille de Perth (1867), and Jeux d'enfants (Children's games) for the piano.

The popular L'Arlésienne Suites were originally produced as incidental music for a play by Alphonse Daudet, first performed in 1872. He also composed a romantic opera, Djamileh, which is often seen as a precursor to Carmen, 1875. This latter opera is Bizet's best-known work and is based on a novella of the same title written in 1846 by Prosper Mérimée. Bizet composed the title role for a mezzo-soprano.

Carmen was not initially well-received but praise for it eventually came from well-known contemporaries including Claude Debussy, Camille Saint-Saëns and Pyotr Tchaikovsky. Their views proved to be prophetic, as Carmen has since become one of the most popular works in the entire operatic repertoire. However Bizet did not live to see its success, as he died from the effects of angina at 36 years old, three months after the play opened. He was the father of one son and reportedly died on his third wedding anniversary. He was buried in the Père Lachaise Cemetery in Paris.

Bizet's music has been used in the twentieth century as the basis for several important ballets. The Soviet-era "Carmen Suite" (1967), set to music drawn from Carmen arranged by Rodion Shchedrin, gave the Bolshoi ballerina Maya Plisetskaya one of her signature roles; it was choreographed by Alberto Alonso. In the West the "L'Arlesienne" of Roland Petit is well-regarded, and the "Symphony in C" by George Balanchine is considered to be one of the great ballets of the twentieth century. It was first presented as Le Palais de Crystal by the Paris Opera Ballet in 1947, and has been in the repertory there ever since. The ballet has no story; it simply fits the music: each movement of the symphony has its own ballerina, cavalier, and Corps de Ballet, all of whom dance together in the finale.

Retrieved from https://www.newworldencyclopedia.org/p/index.php?title=Georges_Bizet&oldid=1005203
Categories:
Hidden category:
This page was last edited on 19 June 2017, at 15:21.
Content is available under Creative Commons Attribution/Share-Alike License; additional terms may apply. See Terms of Use for details.