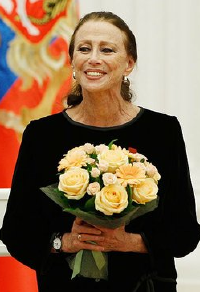 Maya Mikhailovna Plisetskaya (Russian: Майя Михайловна Плисецкая) (November 20, 1925 - May 2, 2015) was a Russian ballet dancer, frequently cited as the greatest ballerina of the modern era. When she was very young, her family was ravaged by the Stalinist purges. However, Maya was encouraged by her artistic family to pursue dance and ballet. She was admitted to the Moscow Choreographic School, which produces most of the Bolshoi Ballet dancers, a year earlier than her classmates. She excelled in her studies and when accepted to the Bolshoi Theater ballet company, it was not as a member of the corps de ballet, but as a soloist. This was a highly unusual move, indicative of the enormous talent Plisetskaya presented.

Maya chaffed against the oppressive regime of the Soviet Union. During the 1950s, she was not allowed to travel abroad with the Bolshoi company, due to her strong will and individualist attitude. Yet her talent was undeniable. She rose to the top of the ballet world with her dancing. After a career which spanned six decades, she retired as a soloist and focused her attention towards teaching the next generation of ballet dancers.

Dance, and art in general, proved capable of breaking the Iron Curtain barrier, uniting East and West. Today the same potential exists to bring together people of all faiths and religions.

Maya Plisetskaya was born in Moscow, on November 20, 1925, to a prominent Jewish family. She went to school in Spitsbergen, where her father worked as an engineer and mine director. Maya's family was one well known for art and entertainment. Her mother, Rakhil Messerer, was a well known silent film actress. Maya's brother, Azari, also became a dancer. Her aunt, Elizaveta, was an actress in Moscow, and her cousin, Boris, was a distinguished set designer.[1] Rakhil's sister and brother, Sulamith and Mikhail Messerer were both talented ballet dancers and soloists, and later distinguished teachers with the Bolshoi Ballet. They coached and encouraged Maya from her earliest days.

In 1937, Maya's father disappeared. It was fifty years before the family learned that he was executed in 1938, as part of Stalinist purges, possibly because he had hired a friend who had been a secretary to Leon Trotsky. Maya's mother was arrested and sent to a labor camp (or Gulag) in Kazakhstan, along with Maya's seven-month old brother[2] They were sent to ALZHIR camp, a Russian acronym for the Akmolinskii Camp for Wives of Traitors of the Motherland, and were labeled "enemies of the people." Thereupon, Maya was adopted by her maternal aunt, the ballerina Sulamith Messerer, until her mother was released in 1941.[3]

When Maya was eight, Sulamith had her enrolled in the Moscow Choreographic School, famous for producing most of the Bolshoi dancers, a year early—because "at home, she just can't help dancing."[1] Maya then began the arduous but dedicated path towards becoming a ballet dancer. She took lessons six days a week, along with her regular school education. Her teacher for six years was the legendary Yelizaveta Gerdt, whose famous father had taught the likes of Anna Pavolva and Tamara Karsavina. Gerdt polished and refined young Maya's talent, referring to the apt student as her "little diamond."[1]

When she was 11, Maya appeared as the Bread Crumb Fairy in The Sleeping Beauty. A year later, she danced the role of the cat in The Little Story, a children's ballet. In her seventh year, she danced the lead in Paquita, and her interpretation aroused much interest. She demonstrated sharp footwork, a remarkably high and seemingly effortless leap, and expressive movement—which would become one of her trademarks. When she graduated from the school in 1943, she was immediately accepted into the Bolshoi company—not as a member of the corps de ballet, but as a soloist.[1] She would perform there until 1990.

Plisetskaya died in Munich, Germany, on May 2, 2015 from a heart attack. She was survived by her husband, and a brother, former dancer Azari Plisetsky, a teacher of choreography at the Béjart Ballet in Lausanne, Switzerland.[4] 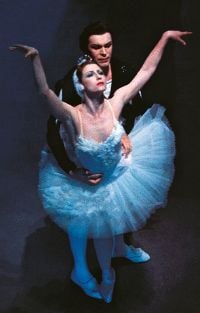 From the beginning, Maya was a different kind of ballerina. Her bypass of the corps de ballet directly to featured performer was highly unusual. Her red hair and striking looks made her a glamorous figure on and off the stage. Her long arms had a fluidity that to this day remains unmatched; her interpretation of The Dying Swan, a short showcase piece made famous by Anna Pavlova, became Maya's calling card. Maya was known for the height of her jumps, her extremely flexible back, the technical strength of her dancing, and her charisma. She made her debut in 1947, performing Swan Lake for the first of what would end up being over 800 times.[5]

Despite her acclaim, Maya was not treated well by the Bolshoi management. Because she was Jewish[6] in an anti-Semitic climate, her family had been purged during the Stalinist era and her personality was defiant, so she was not allowed to tour outside the country for six years after joining the Bolshoi.[2] The Russian term for this was nevyezdnaya (unexportable), and it kept Maya from traveling with the Bolshoi in their trips abroad from 1956-1959.[7] Her absence from the Bolshoi's triumphant visit to London, in 1956, it could be argued, barred her from her proper place in British ballet history. Her first stop after the lifting of the ban, in 1959, was a tour of the United States. She was forced to be a member of the Anti-Zionist Committee of the Soviet Public, threatened to be left without passport for appearances abroad.

With the Bolshoi, Plisetskaya performed many classical roles, interpreting them uniquely but convincingly. She danced Raymonda, the dual role of Odette-Odile (Swan Lake), Aurora (Sleeping Beauty) Myrthe (Giselle), Kitri (Don Quixote), Tsar-Maiden (The Little Humpbacked Horse), and, again, The Dying Swan, which showcased Plisetskaya's famous flexibility. Her arms moved with such pliability as to seem boneless. She would attack the choreography of contemporary Soviet works with enthusiasm, throwing herself into the character and the dance with passion. Her presence dominated the stage, encompassing it with large, expansive movements. She expressed great musicality in her dancing.[1]

In 1958, she was honored with the title of the People's Artist of the USSR and married the young composer Rodion Shchedrin, in whose subsequent fame she shared. After Galina Ulanova left the stage in 1960, Maya Plisetskaya was promoted to prima ballerina assoluta of the Bolshoi Theatre. In the Soviet screen version of Anna Karenina, she played Princess Tverskaya. In 1967, she took on the role of Carmen, in the ballet Carmen-Suite.[5] Featuring choreography by Cuban Alberto Alonso, the ballet gave full rein to Maya's dramatic and artistic talents, and continues to be one of her most famous—and favorite—ballets.[1] In 1971, her husband composed a ballet, Anna Karenina, with Maya playing the leading role as well as taking on the roles of scenographer and choreographer.[8] Other choreographers who created ballets for her include Yury Grigorovich, Roland Petit, and Maurice Bejart.

In the 1980s, Plisetskaya and Shchedrin spent much time abroad, with Plisetskaya working as the artistic director of the Rome Opera Ballet in 1984–5, then the Spanish National Ballet of Madrid from 1987–9. At the age of 65, she finally retired from her position as a soloist with the Bolshoi Ballet. On her 70th birthday, she debuted in a new ballet choreographed for her by Maurice Bejart entitled Ave Maya. Her performance of The Dying Swan at City Center in New York, also performed at age 70, earned her rave reviews. In 1996, she was named President of the Imperial Russian Ballet.[9] On the date of her 80th birthday, the Financial Times summed up current opinion about Maya in the following words: "She was, and still is, a star, ballet's monstre sacre, the final statement about theatrical glamour, a flaring, flaming beacon in a world of dimly twinkling talents, a beauty in the world of prettiness."[10] The following year, Emperor Akihito presented to her the Premium Imperiale, informally considered a Nobel Prize for Art.

Maya Plisetskaya's career stretched over sixty years. As her age made it harder for her to perform at the same athletic she did in her youth, she turned to teaching, influencing an entirely new generation of ballet dancers. In 1994, she founded the Russian Imperial Ballet. The same year, she presented her memoirs in Moscow, I, Maya Plisetskaya, which has been translated into fourteen languages, including German, Italian, Serbian, Japanese, and English. In 2000, she and her husband founded the International Maya Plisetskaya and Rodion Shchedrin Foundation, in Maintz, Germany, to conserve, document, and facilitate access to their collective artistic works.[5] In the 1990s, she presided over the annual international ballet competitions called Maya, a competition allowing participants considerable freedom in choosing their dance styles.[1]

Did you know?
Russian ballerina Maya Plisetskaya danced "Swan Lake" 800 times and was known as "Queen of the air"

Plisetskaya's dancing style impacted generations of dancers all around the world, following the footsteps of other Russian prima ballerinas such as Galina Ulanova and Anna Pavlova. She performed Swan Lake hundreds of times in her career, and was properly dubbed "The Queen of the Air."[5]

On the occasion of her death in 2015, Russian President Vladimir Putin expressed his condolences, and Russian Prime Minister Dmitry Medvedev said that "a whole era of ballet was gone" with Plisetskaya.[11] Belarusian President Alexander Lukashenko extended condolences to her family and friends:

The passing of great Maya Mikhailovna [Plisetskaya] whose creative work embodied the whole cultural era is an irretrievable loss for Russian and world art. Her brilliant choreography and wonderful grace, fantastic power of dramatic identification and outstanding mastery dazzled the audience. Thanks to her selfless service to art and commitment to the stage, she was respected all over the world.[12]

Conductor and artistic director Valery Gergiev, who was a close friend of Plisetskya, gave a concert in Moscow on November 18, 2015, dedicated to her memory.[14]

On November 20, 2015, the government of Russia named a square in her honor in central Moscow, on Ulitsa Bolshaya Dmitrovka, near the Bolshoi Theatre. A bronze plaque affixed at the square included an engraving: “Maya Plisetskaya Square is named after the outstanding Russian ballerina. Opened Nov. 20, 2015.”[15]

In St. Petersburg, the Mariinsky Theater Symphony Orchestra paid homage to Plisetskaya’s memory with a concert on December 27, 2015. It was conducted by Valery Gergiev and included a performance with ballet dancer Diana Vishneva.[14] The Mariinsky Ballet later performed a four-program "Tribute of Maya Plisetskaya" at the Brooklyn Academy of Music in February 2016.[16]

The Bolshoi Theater performed a concert in memory of Plisetskaya at the London Coliseum on March 6, 2016.[17]

A monument to Maya Plisetskaya was unveiled in the center of Moscow, on Bolshaya Dmitrovka, in the square named after her. The opening took place on November 20, 2016, the date of her birth, and shows her in a pose from "Carmen". Describing the monument, one observer commented about sculpturist Viktor Mitroshin and the statue's design:

In choosing Carmen, Mitroshin emphasized not only Plisetskaya’s physical prowess, grace and beauty, he put a big exclamation point after character... Look at those gorgeous arms, hands, legs. Look at the sassy sway of the dress. Look at the dark, hard eyes and the tight, determined mouth. Look at the sway of the back. Look at that crazy flower on her head. Look at how all of it strains upward into the sky. I’m telling you, the whole thing is beautiful.[18]

Maya Plisetskaya was honored on numerous occasions for her skills:[9]