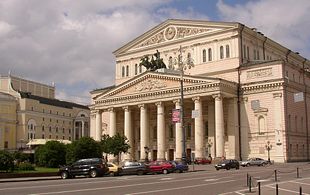 The Bolshoi Theatre of Moscow, Russia

The Bolshoi Theater (Russian: Большой театр, Bol'shoy Teatr, Large Theater) is a theater and opera company in Moscow, Russia, which gives performances of ballet and opera. The theater was home to the Ballet of the Moscow Imperial Bolshoi Theater. During its early years the Bolshoi in Moscow was overshadowed by the Imperial (after the Russian Revolution of 1917, the Kirov Ballet), but during the Soviet era it grew in importance as the center of power shifted from Saint Petersburg to Moscow, and even some of the dancers from the Imperial Ballet joined the troupe at the Bolshoi Ballet. The Bolshoi has been home to some of the world's greatest dancers and directors. Russian ballet and opera have produced some of the great cultural high points in world history.

Significance of the Name

The name comes from the Russian word, Большой "Bolshoi," which means either "large" or "grand." In Moscow and St Petersburg, there were only two theaters, one of them intended for opera and ballet (these were known as the Bolshoi Theaters) and another one for tragedies and comedies. As opera and ballet were considered nobler than drama, the opera house was named the "Grand Theater" and the drama theater, or "Small Theater" was known as the "Maly" theater (Малиый "Maly" is the Russian for "little").

The Bolshoi company in Moscow was founded in 1776 by Prince Peter Urussov and Michael Maddox. Initially it gave performances in a private home, but in 1780 it acquired the Petrovka Theater and began producing plays and operas.

Main Hall of the Bolshoi Theatre

The current building was built on Theater Square in 1824 to replace the Petrovka Theater, which had been destroyed by fire in 1805. It was designed by architect Andrei Mikhailov, who had built the nearby Maly Theatre in 1824. At that time, all the Russian theaters were imperial property.

The Bolshoi Theater built in Moscow was originally called the Imperial Bolshoi Theater of Moscow. The theater was inaugurated on January 18, 1825. Initially it presented only Russian works, but foreign composers entered the repertoire starting from 1840. A fire in 1853 caused extensive damage; reconstruction was carried out by Albert Kavos, son of Caterino Kavos, an opera composer, and reopened in 1856. During World War II, the theater was damaged by a bomb but was promptly repaired.

The Bolshoi has been the site of many historic premieres including Tchaikovsky's Voyevoda and Mazeppa, and Rachmaninoff's Aleko and Francesca da Rimini.

The Bolshoi has been associated from its beginnings with ballet, and is home to the Bolshoi Ballet troupe. Many of the world's great ballets have played there, including a number of important premieres, such as Tchaikovsky's ballet Swan Lake which premiered at the theater on Saturday, March 4, 1877. The Bolshoi was also the site of the premiere of the great French director, Marius Petipa's, production of Don Quixote, a Grand Ballet in 4 Acts-8 Scenes, with music by Léon Minkus. It premiered on December 14, 1869. Later Alexander Gorsky, once Premier Danseur to the Imperial Ballet, staged a new version of this work for the Moscow Imperial Bolshoi Theater in 1900, with additional music composed by Anton Simon, including the Variation of the Dryad Queen from the scene of Don Quixote's Dream (AKA The Garden of Dulcinea or The Kingdom of the Dryads) that is still retained as part of the ballet's performance tradition (later added by Rudolf Nureyev to be danced by Margot Fonteyn in the Le Corsaire Pas de Deux in 1961).

Current status of the Bolshoi

The main Bolshoi is currently closed for restoration work. The New Bolshoi theater, adjacent to it, continues to stage an extensive repertory of concerts and performances. 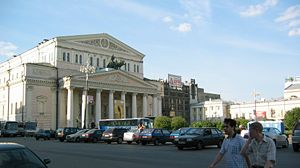 Theatre Square in Moscow. The quadriga above the portico was sculpted by Peter Clodt von Jürgensburg.

Retrieved from https://www.newworldencyclopedia.org/p/index.php?title=Bolshoi_Theater&oldid=1064517
Categories:
This page was last edited on 8 February 2022, at 15:36.
Content is available under Creative Commons Attribution/Share-Alike License; additional terms may apply. See Terms of Use for details.