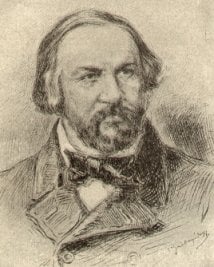 Mikhail Ivanovich Glinka (Russian: Михаил Иванович Глинка, Mihail Ivanovič Glinka) (June 1 [O.S. May 20] 1804 – February 15 [O.S. February 3] 1857), was the first Russian composer to gain wide recognition inside his own country, and is often regarded as the father of Russian classical music. Glinka's compositions were an important influence on future Russian composers, notably the members of The Five, who took Glinka's lead and produced a distinctively Russian kind of classical music.

Mikhail Glinka was born in the village of Novospasskoye, a village not far from the Desna (river) in the Smolensk Oblast Guberniya of the Russian Empire. His father was a wealthy retired army captain, as the family had strong tradition of loyalty and service to the Tsar, while several members of his extended family had also developed a lively interest in culture. As a small child, Mikhail was reared by his over-protective and pampering grandmother who fed him sweets, wrapped him in furs, and confined him to her room, which was always to be kept at 77°F; as such, he developed a sickly disposition, later in his life retaining the services of numerous physicians, and often falling victim to a number of quacks. The only music he heard in his youthful confinement was the sounds of the village church bells and the folk songs of passing peasant choirs. The church bells were tuned to a dissonant chord and so his ears became used to strident harmony. While his nurse would sometimes sing folksongs, the peasant choirs who sang using the podgolosnaya technique (an improvised style—literally under the voice—which uses improvised dissonant harmonies below the melody) influenced the way he later felt free to emancipate himself from the smooth progressions of Western harmony. After his grandmother’s death, Glinka was moved to his maternal uncle’s estate some ten km away, and was able to hear his uncle’s orchestra, whose repertoire included pieces by Haydn, Mozart and Beethoven. He was about ten when he heard them play a clarinet quintet by the Finnish composer, Bernhard Henrik Crusell. It had a profound effect upon him. "Music is my soul," he was to write many years later, recalling this experience. While his governess taught him Russian, German, French, and geography, he also received instruction on the piano and the violin.

At the age of 13 Glinka was sent to the capital, Saint Petersburg, to study at a school for children of the nobility. Here he was taught Latin, English, and Persian, studied mathematics and zoology, and was able to considerably widen his musical experience. He had three piano lessons from John Field, the Irish composer of nocturnes, who spent some time in St Petersburg. He then continued his piano lessons with Carl Meyer, and began composing.

When he left school his father wanted him to join the Foreign Office, and he was appointed assistant secretary of the Department of Public Highways. The work was light, which allowed Mikhail to settle into the life of a musical dilettante, frequenting the drawing rooms and social gatherings of the city. He was already composing a large amount of music, such as melancholy romances which amused the rich amateurs. His songs are among the most interesting part of his output from this period.

In 1830, at the recommendation of a physician, Glinka decided to travel to Italy with the tenor Ivanov. The route was leisurely, ambling uneventfully through Germany and Switzerland, before they settled in Milan. There, Glinka took lessons at the Milan Conservatory with Francesco Basili, although he struggled with counterpoint, which he found irksome. Although he spent his three years in Italy listening to singers of the day, romancing women with his music, and meeting many famous people including Mendelssohn and Berlioz, he became disenchanted with Italy. He realized that his mission in life was to return to Russia, write in a Russian manner, and do for Russian music what Donizetti and Bellini had done for Italian music. His return route took him through the Alps, and he stopped for a while in Vienna, where he heard the music of Franz Liszt. He stayed for another five months in Berlin, during which time he studied composition under the distinguished teacher Siegfried Dehn. A Capriccio on Russian themes for piano duet and an unfinished Symphony on two Russian themes were important products of this period.

When word reached Mikhail Glinka of his father's death in 1836, he left Berlin and returned to Novospasskoye. 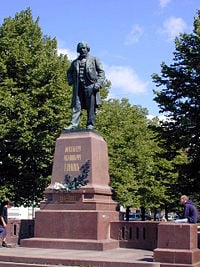 While in Berlin, Glinka had become enamored with a beautiful singer (for whom he composed Six Studies for Contralto). He contrived a plan to return to her, but when his sister's German maid turned up without the necessary paperwork to cross to the border with him, he abandoned his plan as well as his love and turned north for St. Petersburg. There he reunited with his mother, and met the acquaintance of Maria Petrovna Ivanova. After courting her for a brief period, the two married. The marriage was short-lived, as Maria proved to be utterly without tact and uninterested in his music. Although his initial fondness for her was said to have inspired the trio in the first act of opera A Life for the Tsar (Жизнь за царя) (1836), his naturally sweet disposition coarsened under the constant nagging of his wife and her mother. After separating, she would remarry, while Glinka moved in with his mother, and later his sister (Lyudmila Shestakova).

A Life for the Tsar was the first of Glinka's two great operas. It was originally entitled Ivan Susanin. Set in 1612 the story tells the story of the Russian peasant and patriotic hero Ivan Susanin who sacrifices his life for the Tsar by leading astray a group of marauding Poles who were hunting him. The Tsar himself followed the work’s progress with interest and suggested the change in the title. It was a great success at its premiere on December 9, 1836, under the direction of Catterino Cavos, who had written an opera on the same subject in Italy. Although the music is still more Italianate than Russian, Glinka shows superb handling of the recitative which binds the whole work, and the orchestration is masterly, foreshadowing the orchestral writing of later Russian composers. The Tsar rewarded Glinka for his work with a ring valued at 4000 Russian rubles. (During the Soviet era, the opera was staged under its original title Ivan Susanin).

In 1837, Glinka was installed as the instructor of the Imperial Chapel Choir, with a yearly salary of 25,000 roubles, and lodging at the court. In 1838, at the suggestion of the Tsar, he went off to the Ukraine to gather new voices for the choir; the 19 new boys he found earned him another 1,500 roubles from the Tsar.

He soon embarked on his second opera: Ruslan and Lyudmila. The plot, based on the tale by Pushkin, was concocted in 15 minutes by Konstantin Bakhturin, a poet who was drunk at the time. Consequently the opera is a dramatic muddle, yet the quality of Glinka’s music is higher than in A Life for the Tsar. He uses a descending whole-tone-scale in the famous overture. This is associated with the villainous dwarf Chernomor who has abducted Lyudmila, daughter of the Prince of Kiev. There is much Italianate coloratura, and Act three contains several routine ballet numbers, but his great achievement in this opera lies in his use of folk melody which becomes thoroughly infused into the musical argument. Much of the borrowed folk material is Asian in origin. When it was first produced on December 9, 1842, it met with a cool reception, although subsequently it gained popularity.

Glinka went through a dejected year after the poor reception of Ruslan and Lyudmila. His spirits rose when he traveled to Paris and Spain. In Paris, Berlioz conducted some excerpts from Glinka’s operas and wrote an appreciative article about him. Glinka in turn admired Berlioz’s music and resolved to compose some fantasies pittoresques for orchestra. Another visit to Paris followed in 1852 where he spent two years, living quietly and making frequent visits to the botanical gardens and zoological gardens. From there he moved to Berlin where, after five months, he died suddenly on February 15, 1857, following a cold. He was buried in Berlin but a few months later his body was taken to St Petersburg and reinterred in the cemetery of the Alexander Nevsky Monastery. 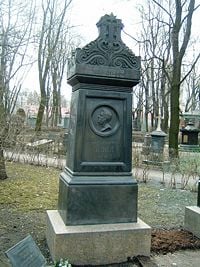 Grave of Mikhail Glinka on Tikhvin Cemetery in Saint Petersburg.

After Glinka's death the relative merits of his two operas became a source of heated debate in the musical press, especially between Vladimir Stasov and his former friend Alexander Serov.

Outside Russia several of Glinka's orchestral works have been fairly popular in concerts and recordings. Besides the well-known overtures to the operas (especially the brilliantly energetic overture to Ruslan), his major orchestral works include the symphonic poem Kamarinskaya (1848), based on Russian folk tunes, and two Spanish works, A Night in Madrid (1848, 1851) and Jota Aragonesa (1845).

Glinka also composed many art songs, many piano pieces, and some chamber music.

A much lesser work that received some attention in the last decade was Glinka's "The Patriotic Song," supposedly written for a contest for a national anthem in 1833; the music was adopted as the national anthem of Russia during 1990-2000.

When evaluating Glinka’s achievement it is important to see him in the context of Russian music at the time. Ever since him, there has been a strong leaning towards the music of Western composers. Even Russian folksong in the cities had become Westernized with regular rhythms and phrase structures and simple harmony, quite unlike the purer forms of folk music Glinka would have known from his childhood. Glinka’s achievement lies in the way he let his Russian character pervade his Western-based compositional style, creating models for future Russian composers.