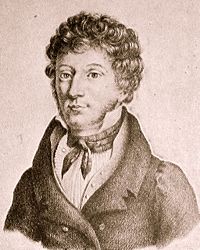 John Field (July 26, 1782 – January 23, 1837) was an Irish composer and pianist. The Classical era at the time of John Field highlighted the quick and dramatic twists of contrasting themes within a melody, a movement, as well as an entire composition in differentiation to the earlier Renaissance and Baroque periods which sought to convey one mood or emotion within a single composition.

John Field exemplified these classical contrasts of mood in nocturnes, and he thus is best known for being the first composer to write nocturnes. Nocturnes, sometimes referred to as nocturnal or night songs, are usually languid though lyrical piano compositions depicting heightened emotions through broad harmony and intimate flowing melodies. Field used the nocturne as a medium to communicate to the listener, within a society that enjoyed great variety and tolerated broad swings in the arts, a means for self–reflection.

Born in Dublin, in 1782, Field first studied the piano under his grandfather, (also named John Field) a professional organist, and later under Tommaso Giordani. He was the eldest son of Robert Field, who was a violinist. He made his debut at the age of nine, a performance that was well-received. His family moved to Bath in 1793, and later that same year went to London. Field's father there secured for him an apprenticeship with the pianist and piano manufacturer Muzio Clementi. He attracted favorable comment from Joseph Haydn for his performances. By the time he was seventeen, Field had already premiered his First Piano Concerto (he wrote seven of them); it was one of the last acts of his apprenticeship. He was lionized as a performer for several years before turning to composition, beginning with his first set of piano sonatas, dedicated to Clementi, published in 1801.

In 1801 Field accompanied Clementi on a tour of Paris and Vienna (where he studied briefly with Johann Georg Albrechtsberger). When Clementi moved to Russia, Field followed him there, continuing his employment demonstrating his pianos. Field established his own concert career in Russia, and by 1806 was dividing his time between Moscow and Saint Petersburg, settling in the latter city after his marriage in 1810. His teaching proved lucrative, and his lifestyle became somewhat extravagant; he was something of a bon viveur, and fathered an illegitimate son.

By 1831 his health deteriorated, with a painful cancer of the rectum, and he traveled back to London for medical attention. He returned to Russia by way of France (where, after first hearing one of Franz Liszt's assaults on the keyboard, he asked his neighbor, "Does he bite?") and Italy, spending nine months in a hospital in Naples. Helped by a Russian aristocratic family, he returned to Moscow in 1835. There he composed his last few nocturnes in the sixteen months remaining to him. He died in Moscow.

Field is best remembered for his eighteen nocturnes, which are single movement impromptu compositions for piano that maintain a single mood throughout. The first three of these date from 1812. These pieces are further notable for their influence on Frédéric Chopin, who continued on to write 21 nocturnes himself. These popular nocturne forms were expanded to three movement orchestral compositions by later composers such as Claude Debussy.

Among his solo piano compositions, Field composed 18 nocturnes, four piano sonatas (the first three published together as his Op. 1), as well as fantasias, etudes, rondos, and sets of variations.