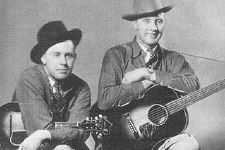 Bill Monroe (September 13, 1911 – September 9, 1996) was an American singer, songwriter, band leader, and mandolin player, often referred to as the "Father of Bluegrass Music." Bluegrass takes its name from Monroe's band, the "Blue Grass Boys," which in turn pays affectionate homage to his home state of Kentucky, the "Bluegrass State."

Monroe developed his technique and the furious tempo that often characterizes bluegrass while performing and recording with his brother Charlie in the 1930s, as one of the Monroe Brothers. Bluegrass is notable for the lightning-fast interchange of instruments, typically a guitar, banjo, mandolin, and fiddle. Monroe's virtuoso mandolin playing and plaintive tenor singing style, known as the "high, lonesome sound," have come to typify bluegrass music. The roots of bluegrass can be traced to earlier traditional forms, but Monroe is rightly credited with combining these elements into a unique musical idiom. Monroe's many compositions over a seventy-year career have become part of the repertoire of nearly all bluegrass musicians.

Monroe was an intensely competitive and demanding bandleader. His forceful personality molded his Blue Grass Boys into a virtual "school of bluegrass," graduating some of the genre's most important artists, including Lester Flatt, Earl Scruggs, Don Reno, Jimmy Martin, and Del McCoury. Beyond direct musical influence, Monroe largely defined the thematic conventions of bluegrass with his emphasis of the fragility of love, reverence for nature, and, particularly, the ties of heart to one's home and family. Monroe authored many gospel bluegrass songs, and themes of religious faith have become standard to the genre.

Monroe and his band have influenced musicians as diverse as the Everly Brothers, Elvis Presley, George Jones, Emmylou Harris, Dolly Parton, and Jerry Garcia. Contemporary country stars such as Alison Krauss, Ricky Skaggs, Vince Gil, and others have strong associations with Monroe's music.

Monroe was born in Rosine, Kentucky, the youngest of eight children. His father was a prosperous farmer while his mother, née Malissa Vandiver, was of more humble social origins. Malissa and her brother, Pendleton "Pen" Vandiver, were both musically inclined. Bill's mother passed on her knowledge of traditional ballads originating in the British Isles, while "Uncle Pen" taught him the old-time fiddle-playing that became a characteristic of the bluegrass sound. Monroe learned guitar from a black musician named Arnold Shultz, who sometimes played with Bill and "Uncle Pen" at local dances.

Monroe's professional career began in the 1930s when he and his older brothers, Birch and Charlie, began performing as a trio at a radio station in South Bend, Indiana, near Hammond, where all three worked in an oil refinery. During this time Bill also performed as a square dancer on Chicago’s WLS National Barn Dance show. Birch soon left the music scene, but the younger two brothers continued to perform and record as the Monroe Brothers. They developed considerable popularity beginning in 1935, through their appearances on the powerful WBT radio station out of Charlotte, North Carolina. Bill's mandolin playing already displayed a blues-influenced, hard-driving virtuosity and set their act apart from several other guitar-mandolin acts of the day.

RCA record producer Eli Oberstein recorded the Monroe Brothers for the first time in 1936, and the act had several hits. Bill and Charlie parted ways, however, in 1938. Bill recorded two more sessions for RCA with his new band, the Blue Grass Boys. 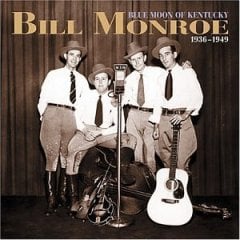 Bill Monroe (seated) with an early version of the Blue Grass Boys.

Auditioning in Nashville for the WSM Grand Ole Opry, Monroe reportedly impressed the show's executives with his up-tempo rendition of “Mule Skinner Blues,” an earlier hit by the legendary Jimmie Rodgers. The song became Monroe's trademark and was later successfully covered by Dolly Parton. Monroe rose quickly on the strength of the Opry's popularity. He was reportedly grossing over $200,000 a year by 1943, making him a major star.

In the early 1940s, Monroe added the banjo, played by "Stringbean" (Dave Akeman), who dressed as a hillbilly clown with his pants belted far below his waist. The band also included an accordion player and, occasionally, a harmonica player. In 1945, the phenomenal young banjo player, Earl Scruggs, joined the band, and the accordion was dropped. Scruggs's revolutionary, lightening-speed three-finger picking style was a perfect match for Monroe's unrivaled speed and power on the mandolin. Lester Flatt's baritone crooning, meanwhile, blended well with Monroe's "high, lonesome" tenor voice. Not to be overlooked in this seminal group was Chubby Wise, whose unique blend of blues, swing, and country fiddle styles would become the standard for future bluegrass fiddlers. The band's late 1940s recordings for Columbia are now widely recognized as classics.

A crisis hit the band in 1948, when Flatt and Scruggs left the group to form the Foggy Mountain Boys. Jimmy Martin, whose voice more closely resembled Monroe's than did Flatt's, took over as Monroe's singing partner, while the teenage prodigy, Sonny Osborne, handled Scruggs's former duties on the banjo admirably. While Monroe reportedly felt betrayed by the disloyalty of Flatt and Scruggs, their departure from the group was also a blessing in disguise for Monroe's legacy, as their "bluegrass" music won wide recognition. By the early 1950s several successful bluegrass bands had emerged: the Stanley Brothers, Jim and Jesse McReynolds, and Reno & Smiley, as well as Flatt & Scruggs.

In the future, Monroe's band would serve as a training ground for countless bluegrass singers and musicians. More than 150 musicians played in the Blue Grass Boys over the years. Many later became stars in their own right, including Mac Wiseman, Clyde Moody, Sonny Osborne, Jimmy Martin, Don Reno, Del McCoury, Vassar Clements, Peter Rowan, and Carter Stanley, among others. Hank Williams, Sr. teamed with Monroe to write Monroe's hit "Blue and Lonesome." Monroe's own waltz number, "Blue Moon of Kentucky," was one of the first songs recorded by Elvis Presley, who played it in a 4/4 rockabilly style.

While Monroe did not score many hit singles on the country charts after the 1950s, he maintained a loyal audience for his numerous albums and appearances, and his audience widened considerably in the 1960s, as a result of the rise in popularity of folk music. Audiences attracted to bluegrass music through television performances of Flatt & Scruggs and the Dillards often learned that the “Father of Bluegrass” was Bill Monroe. Hundreds of young "pickers" formed bluegrass bands all over America, nearly always incorporating several Monroe songs into their repertoire. Bluegrass festivals and banjo-and-fiddle contests sprang up from California to Virginia, with Monroe and his band much in demand. This phenomenon became more pronounced in the 1970s, 1980s, and 1990s. As a result, Monroe's traditional bluegrass albums continued to find an audience even while "newgrass" groups flooded the market with innovative approaches to the genre.

In 1982, the National Endowment for the Arts gave Monroe its prestigious Heritage Award, and in 1988, he won a Grammy for his album Southern Flavor—the first bluegrass Grammy ever bestowed. Bill Monroe was inducted into the Country Music Hall of Fame in 1970, the International Bluegrass Music Hall of Honor as an inaugural inductee in 1991, and the Rock and Roll Hall of Fame (as an "early influence") in 1997. He is the only performer honored in all three. He was also the 1993 recipient of the Lifetime Achievement Award from the National Academy of Recording Arts and Sciences (NARAS), placing him in the company of Louis Armstrong, Chet Atkins, Ray Charles, and Paul McCartney, among others. As of 2006, Monroe ranked #16 on Country Music Television's list of 40 Greatest Men of Country Music, just behind Elvis Presley.

Until shortly before his death, Monroe continued to bring his music to worldwide audiences. He appeared in all 50 states of the U.S. and many foreign countries, including Japan, Canada, England, Ireland, Holland, Switzerland, and Israel. He had reunion concerts with several of the early Blue Grass Boys, and also performed with younger inheritors of his legacy. Bluegrass festivals throughout America honored him as the originator of the music to which they were devoted. He also played at numerous urban performing arts centers and the White House.