Bill Haley (July 6, 1925 - February 9, 1981) was one of the first American rock and roll musicians, brought this form of music into the American mainstream in the mid-1950s with the hit song, "Rock Around the Clock." With his group Bill Haley & His Comets Haley expanded the appeal of rock and roll to a much wider audience after years of the style being relegated to the R & B and rockabilly markets.

After a mildly successful career as a western swing performer in the later 1940s, Haley began performing in the rockabilly genre in the early 1950s and scored a major hit with a cover of Big Joe Turner's "Shake, Rattle, and Roll" in 1954. When "Rock Around the Clock" appeared in the 1955 film, Blackboard Jungle, it rocketed to the top of the U.S. Billboard charts for eight weeks, beginning a musical revolution that ushered in the rock and roll era. He had several other hits, including "See You Later Alligator," but was soon eclipsed by younger stars, such as Elvis Presley and others.

Haley continued to record and tour, and his career received a boost during the rock and roll revival movement of the 1970s. He died in 1981, after suffering a brain tumor. In 1987, Haley was posthumously inducted into the Rock and Roll Hall of Fame.

Haley was born William John Clifton Haley in Highland Park, Michigan, and raised in Booth's Corner, Pennsylvania. Many sources state that Haley was born in 1927, apparently due to Haley taking two years off his age for publicity purposes in the 1950s. Several sources append "Junior" to his name, but his eldest son had stated that this is erroneous.

Haley was blinded in his left eye as a child due to a failed operation. According to biographer John Swenson, Haley later adopted his distinctive spit-curl hairstyle to distract attention from his blind eye. The hair style caught on as a 50s-style signature, although Haley and others had worn the hairstyle much earlier.

In 1946, Haley joined his first professional group, a Pennsylvania-based western swing band called the Down Homers. As Haley became experienced on the professional music scene, he created several groups. These included the Four Aces of Western Swing and the Range Drifters. With the Four Aces, he made some country hit singles in the late 1940s, for Cowboy Records. During this time he worked as a touring musician and, beginning in 1947, as musical director at radio station WPWA in Philadelphia. Many of Haley's early recordings from this period would not be released until after his death.

After disbanding the Four Aces and briefly trying a solo career using the names Jack Haley and Johnny Clifton, Haley formed a new group called the Saddlemen around 1950, recording for several labels.

In 1951, Haley was signed to Dave Miller's Philadelphia-based Holiday Records and began to move toward the rockabilly genre, recording "Rocket 88," and in, 1952, "Rock the Joint" for Miller's larger Essex label. These recordings both sold in the 75,000-100,000 range in the Pennsylvania-New England region.

In 1951, Haley crossed paths with The Treniers while playing in Wildwood, New Jersey. Haley arranged for their song, "Rock a Beatin' Boogie," to be recorded by two bands: the Esquire Boys in 1952 and The Treniers themselves in 1953. (Bill Haley and The Comets did not record their own version of the song until 1955.)

During the Labor Day weekend in 1952, the Saddlemen were renamed "Bill Haley with Haley's Comets," inspired by a popular mispronunciation of Halley's Comet. In 1953, Haley's recording of "Crazy Man, Crazy" hit the American charts, considered by many to be the first true "rock and roll" song to do so. Soon after, the band's name was revised to Bill Haley & His Comets.

"Rock Around the Clock" was written for Haley in 1953, but he was unable to record it until April 12, 1954. Initially, it was relatively unsuccessful, remaining on the charts for only one week. However, Haley soon scored a major worldwide hit with a cover version of Big Joe Turner's "Shake, Rattle and Roll," which went on to sell a million copies and became the first ever rock song to enter British singles charts in December 1954 and became a Gold Record.

Then, when "Rock Around the Clock" appeared behind the opening credits of the 1955 hit film, Blackboard Jungle, starring Glenn Ford, the song soared to the top of the American Billboard charts for eight weeks. It launched a musical revolution that opened the doors for the likes of Elvis Presley and others.

"Rock Around the Clock" was the first record ever to sell over one million copies in both Britain and Germany. Thus, in 1957, Haley became the first major American rock singer to tour Europe. Haley continued to score hits throughout the 1950s, such as "See You Later, Alligator," and he starred in the first rock and roll musical movies, Rock Around the Clock and Don't Knock the Rock, both in 1956. His star was soon surpassed in the United States by the younger, sexier Elvis Presley, but Haley continued to be a major star in Latin America, Mexico, and Europe throughout the 1960s. 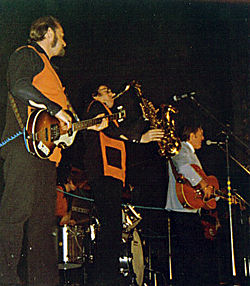 A self-admitted alcoholic, Haley fought a battle with liquor well into the 1970s. Nonetheless, he and his band continued to be a popular touring act, enjoying a career resurgence in the late 1960s with the rock and roll revival movement and signing of a lucrative record deal with the European Sonet Records label. After performing for Queen Elizabeth II at a command performance in 1979, Haley made his final performances in South Africa in May and June of 1980.

Prior to the South African tour, he was diagnosed with a brain tumor, and a planned tour of Germany in the fall of 1980 was canceled. He soon retired to his home in Harlingen, Texas where he died early on the morning February 9, 1981.

Media reports immediately following his death indicated Haley displayed deranged and erratic behavior in his final weeks, although there is little information about Haley's final days. The exact cause of his death is controversial. Media reports, supported by Haley's death certificate, suggest he died of "natural causes most likely heart attack." Members of Haley's family, however, contest that he died from the brain tumor.

Married three times, Bill Haley had at least eight children. John W. Haley, his eldest son, wrote a biography of Haley, Sound and Glory, while his youngest daughter, Gina Haley, is a musician based out of Los Angeles. Scott Haley went on to be a noted athlete. His second son, Bill Haley Jr. is currently writing a biography about his father, concentrating on the years 1949-1961.

Haley was posthumously inducted into the Rock and Roll Hall of Fame in 1987. The remaining Comets from 1954 and 1955 still tour the world to packed houses. The group recleased a concert DVD in 2004, on Hydra Records, playing the trendy Viper Room in West Hollywood in 2005, and performing at Dick Clark's American Bandstand Theater in Branson, Missouri in 2006-07. The Bill-Haley-Museum opened in Munich, Germany in 2007.

In February 2006, the International Astronomical Union announced the naming of asteroid 79896 Billhaley to mark the twenty-fifth anniversary of Bill Haley's death. Numerous biographies and histories have been written about Haley and his role in the development of rock and roll.

Unlike his contemporaries, Bill Haley has rarely been portrayed on screen. Following the success of The Buddy Holly Story in 1978, Haley expressed interest in having his life story committed to film, but this never came to fruition. In the 1980s and early 1990s, numerous media reports emerged that plans were underway to do a biopic based upon Haley's life, with Beau Bridges, Jeff Bridges and John Ritter all at one point being mentioned as actors in line to play Haley (according to Goldmine Magazine, Ritter attempted to buy the film rights to Sound and Glory). In March 2005, the British network Sky TV reported that Tom Hanks was planning to produce a biopic on the life of Bill Haley, with production tentatively scheduled to begin in 2006. However, this rumor was quickly debunked by Hanks.

As Bill Haley and the Four Aces of Western Swing 1948

As Bill Haley and his Comets

As Bill Haley & the Saddlemen (and variations of the name) 1950

As Bill Haley & His Comets (and name variations thereof) 1953

Notable discoveries that have been commercially released have included:

Retrieved from https://www.newworldencyclopedia.org/p/index.php?title=Bill_Haley&oldid=1063473
Categories:
Hidden category:
This page was last edited on 23 January 2022, at 01:39.
Content is available under Creative Commons Attribution/Share-Alike License; additional terms may apply. See Terms of Use for details.