DVD (a common initialism for Digital Video Disc or Digital Versatile Disc) is an optical disc storage media format that can be used for data storage, including movies with high video and sound quality. DVDs resemble compact discs as their diameter is the same (120 mm (4.72 inches) or occasionally 80 mm (3.15 inches)), but they are encoded in a different format and at a much higher density.

All read-only DVD discs, regardless of type, are DVD-ROM discs. This includes replicated (factory pressed), recorded (burned), video, audio, and data DVDs. A DVD with properly formatted and structured video content is a DVD-Video. DVDs with properly formatted and structured audio are DVD-Audio discs. Everything else (including other types of DVD discs with video) is referred to as a DVD-Data disc. Many people, however, use the term "DVD-ROM" to refer to pressed data disks only. 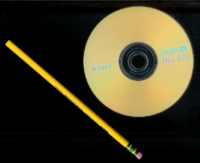 A 12 cm Sony DVD+RW shown in comparison in size to a 7.5 inch Dixon Ticonderoga pencil.

In the early 1990s, two high-density optical storage standards were being developed; one was the MultiMedia Compact Disc, backed by Philips and Sony, and the other was the Super Density disc, supported by Toshiba, Time-Warner, Matsushita Electric, Hitachi, Mitsubishi Electric, Pioneer, Thomson, and JVC. IBM's president, Lou Gerstner, led an effort to unite the two camps behind a single standard, anticipating a repeat of the costly format war between VHS and Betamax in the 1980s.

Philips and Sony abandoned their MultiMedia Compact Disc and fully agreed upon Toshiba's SuperDensity Disc with only one modification, namely, Eight-to-Fourteen Modulation (EFMPlus). EFMPlus was chosen as it has great resilience against disc damage such as scratches and fingerprints. EFMPlus, created by Kees Immink, who also designed EFM, is six percent less efficient than the Toshiba's code, which resulted in a capacity of 4.7 GB as opposed to the original 5 GB. The result was the DVD specification, finalized for the DVD movie player and DVD-ROM computer applications in December of 1995.[1] In May 1997, the DVD Consortium was replaced by the DVD Forum, which is open to all other companies.

"DVD," originally used as an initialism for "digital videodisk",[2] was decided to officially stand for "digital versatile disc" at the time of the 1995 specification finalization (due to non-video applications).

DVD uses 650 nm wavelength laser diode light as opposed to 780 nm for CD. This permits a smaller spot on the media surface that is 1.32 µm for DVD while it was 2.11 µm for CD.

Size Note: There is a difference in size between + and - DL DVD formats. For example, the 12 cm single sided disk has capacities:

The four basic types of DVD are referred to by their capacity in gigabytes, rounded up to the nearest integer.

Another format in limited use is a double sided DVD with one side comprising a single layer of data while the opposite side comprises two layers of data (effectively a DVD-5 on one side bonded to a DVD-9 on the other). This format holds approximately 12.3 GB of data and is known as DVD-14.[3] 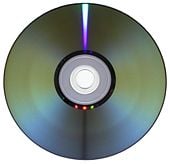 A Dual Layer disc differs from its usual DVD counterpart by employing a second physical layer within the disc itself. The drive with Dual Layer capability accesses the second layer by shining the laser through the first semi-transparent layer. The layer change mechanism in some DVD players can show a noticeable pause, as long as two seconds by some accounts. More than a few viewers have worried that their dual layer discs were damaged or defective.

DVD recordable discs supporting this technology are backward compatible with some existing DVD players and DVD-ROM drives.[6] Many current DVD recorders support dual-layer technology, and the price point is comparable to that of single-layer drives, though the blank media remains significantly more expensive.

DVD-Video is a standard for storing video content on DVD media. As of 2003, DVD-Video has become the dominant form of consumer video formats in the United States, Europe, and Australia.

DVD-Audio is a format for delivering high-fidelity audio content on a DVD. It offers many channel configuration options (from mono to 5.1 surround sound) at various sampling frequencies and sample rates. Compared with the CD format, the much higher capacity DVD format enables the inclusion of either considerably more music (with respect to total running time and quantity of songs) or far higher audio quality (reflected by higher linear sampling rates and higher vertical bit-rates, and/or additional channels for spatial sound reproduction).

Despite DVD-Audio's superior technical specifications, there is debate as to whether or not the resulting audio enhancements are distinguishable to typical human ears. DVD-Audio currently forms a niche market, probably due to its dependency upon new and relatively expensive equipment.

To date, CPPM has not been "broken" in the sense that DVD-Video's Content Scramble System (CSS) has been broken, but ways to circumvent it have been developed.[7] By modifying commercial DVD(-Audio) playback software to write the decrypted and decoded audio streams to the hard disk, users can, essentially, extract content from DVD-Audio discs much in the same way they can from DVD-Video discs.

Internal mechanism of a DVD-ROM Drive

DVD drives for computers usually come with one of two kinds of Regional Playback Control (RPC), either RPC-1 or RPC-2. This is used to enforce the publisher's restrictions on what regions of the world the DVD can be played (Regional lockout and DVD region codes). Most DVD players (both standalone models and software players) come further encumbered with restrictions forbidding the viewer from skipping (or in some cases fast-forwarding) certain content such as copyright warnings or advertisements. See User operation prohibition.

The first generation of holographic media with 300 GB of storage capacity and a 160 Mbit/s transfer rate was scheduled for release in late 2006 by Maxell and its partner, InPhase.

On November 18, 2003, the Chinese news agency Xinhua reported the final standard of the Chinese government-sponsored Enhanced Versatile Disc (EVD), and several patents for it. Shortly thereafter the development of the format was halted by a licensing dispute between Chinese companies and On2 Technologies, but on December 6, 2006, 20 Chinese electronic firms unveiled 54 prototype EVD players and announced their intention for the format to completely replace DVDs in China by 2008.

On November 19, 2003, the DVD Forum decided by a vote of eight to six that HD DVD will be its official HDTV successor to DVD. This had no effect on the competing Blu-ray Disc Association's (BDA) determination that its format would succeed DVD, especially since most of the voters belonged to both groups.

On April 15, 2004, in a co-op project with TOPPAN Printing Co., the electronics giant Sony Corp. successfully developed the paper disc, a storage medium that is made out of 51% paper and offers up to 25 GB of storage, about five times more than the standard 4.7 GB DVD. The disc can be easily cut with scissors and recycled, offering foolproof data security and an environmentally friendly storage media.

In April 2000, Sonic Solutions and Ravisent announced hDVD, an HDTV extension to DVD that presaged the HD formats that debuted six years later.[10] This situation—multiple new formats fighting as the successor to a format approaching purported obsolescence—previously appeared as the "war of the speeds" in the record industry of the 1950s. It is also similar to the VHS/Betamax war in consumer video recorders in the late 1980s.

The new generations of optical formats have restricted access through various digital rights management schemes such as AACS and HDCP; it remains to be seen what impact the limitation of fair use rights has on their adoption in the marketplace.