Toshiba was formed in 1939, by the merger of Toshiba of Shibaura Seisakusho and Tokyo Denki, and is part of the Mitsui keiretsu (conglomerate). Toshiba's motto, "Leading Innovation," is reflected in its group-wide innovation program, called "i cube:" Innovation in development, innovation in manufacturing, and innovation in sales, intended to give Toshiba employees a sense of urgency and encourage them to explore new business processes. Toshiba has been responsible for a number of Japanese firsts, including radar (1942), the TAC digital computer (1954), transistor television and microwave oven (1959), color video phone (1971), Japanese word processor (1978), MRI system (1982), laptop personal computer (1986), NAND EEPROM (1991), DVD (1995), the Libretto sub-notebook personal computer (1996), and HD DVD (2005; now defunct).

Toshiba has applied the concept of innovation to environmental issues. It is a leader among manufacturers who are striving to establish an environmentally safe and sustainable manufacturing model. In 2008, Toshiba tied for first place in Greenpeace’s seventh edition of its Guide to Greener Electronics. 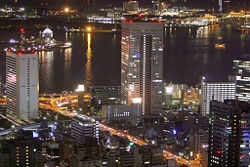 Toshiba was founded by the merging of two companies in 1939, "Shibaura Seisakusho" and "Tokyo Denki."

Shibaura Seisakusho had been founded in 1875 as "Tanaka Seizosho" (Tanaka Engineering Works) by Hisashige Tanaka (1799–1881), known from his youth for inventions that included mechanical dolls and a perpetual clock. The original company manufactured high-powered steam engines for ocean-going ships and machine tools. In 1904, its name was changed to "Shibaura Seisakusho" (Shibaura Engineering Works). It was taken over by the Mitsui business combine (zaibatsu), and during the early twentieth century, it became one of Japan's largest manufacturers of heavy electrical apparatus.[3] Tanaka Seizosho was Japan's first manufacturer of telegraph equipment.

Tokyo Denki was established in 1890, as Hakunetsusha & Co., Ltd., and, with Mitsui financing, began manufacturing bamboo-filament electric light bulbs. It was Japan's first producer of incandescent electric lamps. It diversified into the manufacture of other consumer products and, in 1899, was renamed Tokyo Denki (Tokyo Electric Company).

Both of these companies had early affiliations with the American General Electric Company (GE). In 1907, GE obtained an interest in Tokyo Electric, in exchange for assistance with technology to mass-produce Mazda electric lamps; and in 1909, GE established a similar arrangement with Shibaura Seisakusho. GE is still a major shareholder in Toshiba.

In 1939, Shibaura Seisakusho and Tokyo Denki merged to create a new company called "Tokyo Shibaura Denki" (東京芝浦電気). It was soon nicknamed Toshiba, but it wasn't until 1978 that the company was officially renamed Toshiba Corporation.

When the zaibatsu were dissolved after World War II, Toshiba separated from the Mitsui Group zaibatsu. Toshiba became re-affiliated with the Mitsui keiretsu (a set of companies with interlocking business relationships and shareholdings), in 1973, and still has preferential arrangements with Mitsui Bank and the other members of the keiretsu.

In 1987, Toshiba Machine, a subsidiary of Toshiba, was accused of illegally selling CNC milling machines, used to produce ultra-quiet submarine propellers, to the Soviet Union in violation of the "CoCom" agreement, an international embargo on Western exports to Eastern Bloc countries. The scandal involved a subsidiary of Toshiba and the Norwegian company Kongsberg Defence & Aerospace (Kongsberg Vaapenfabrikk). The incident strained relations between the United States and Japan, and resulted in the arrest and prosecution of two senior executives, as well as the imposition of economic sanctions on the company by both countries.[4]

In 2001, Toshiba signed a contract with Orion Electric, one of the world's largest OEM (original equipment manufacturer) makers and suppliers of consumer video electronics, to manufacture and supply finished consumer TV and video products for Toshiba, to meet the increasing demand for the North American market.

In December 2004, Toshiba quietly announced it would discontinue manufacturing traditional cathode ray tube (CRT) televisions. In 2006, Toshiba terminated production of plasma TVs. Toshiba quickly switched to Orion as the supplier and maker of Toshiba-branded CRT-based TVs and plasma TVs. However, to ensure its future competitiveness in the flat-panel digital television and display market, Toshiba has made a considerable investment in a new kind of display technology called Surface-conduction electron-emitter display (SED).

In late 2007, Toshiba's logo replaced the former Discover Card logo on one of the screens atop One Times Square in New York City. It displays the iconic New Year's countdown on its screen, as well as messages, greetings, and advertisements for the company.

In July 2005, BNFL confirmed it planned to sell Westinghouse Electric Company, then estimated to be worth $1.8bn (£1bn).[5] The opportunity attracted interest from several companies including Toshiba, General Electric, and Mitsubishi Heavy Industries, and when the Financial Times reported on January 23, 2006, that Toshiba had won the bid, it valued the company's offer at $5bn (£2.8bn). Many industry experts questioned the wisdom of selling one of the world's largest producers of nuclear reactors shortly before the market for nuclear power is expected to grow substantially (China, the United States, and the United Kingdom are all expected to invest heavily in nuclear power).[6] The acquisition of Westinghouse for $5.4bn was completed on October 17, 2006, with Toshiba obtaining a 77 percent share, partners The Shaw Group a 20 percent share, and Ishikawajima-Harima Heavy Industries Co. Ltd. a 3 percent share.

In March 2008, Toshiba announced that it had launched the Toshiba America Nuclear Energy Corporation. The primary mission of the company is marketing and promoting advanced boiling water nuclear power plants and providing support for related services.

Toshiba is believed to be involved (together with the Central Research Institute of Electric Power Industry) in the preparation of the small (30MW) nuclear plant Toshiba 4S for installation at Galena, Alaska,[7], and even smaller (200KW) plants for Japan and Europe.[8]

In response to complaints from customers who felt that repairs for broken laptops and computers were taking too long, Toshiba partnered with the United Parcel Service (UPS) to design a more efficient repair process. Customers are told to drop off their machines at a UPS Store, where they are shipped to a Toshiba-run repair facility, which repairs the laptops and sends them back to the customer.[10]

On February 19, 2008, Toshiba announced that it would drop its format in the HD DVD "war" with Sony and Pioneer-backed Blu-ray Disc devices.[11] Following a review of its business, Toshiba determined to stop production of HD DVD players and recorders, since major U.S. film studios backed the Blu-ray format, developed by Sony and its partners. Toshiba will continue to provide technical support to the estimated one million people worldwide who own HD DVD players and recorders.

Toshiba's president has stated that the company has no intention of manufacturing Blu-ray disc players, and that Toshiba will instead "think about its role in online video-downloading more seriously." Toshiba will also maintain relations with the companies that collaborated to build up the HD DVD market, including Universal Studios, Paramount Pictures, DreamWorks Animation, and major Japanese and European content providers, as well as leaders in the IT industry, including Microsoft, Intel, and Hewlitt-Packard.

In 2008, Toshiba tied for first place in Greenpeace’s seventh edition of its Guide to Greener Electronics.[12] Greenpeace is an environmental protection organization that ranks electronics companies based on their chemical use and recycling programs.[12] Toshiba received 7.7 points out of ten points possible, showing its improvement in recycling and chemical use since the last edition when it was only ranked number six.[12] Toshiba focused on improving its score in Individual Producer Responsibility (IPR), which measures how efficiently a company deals with e-waste, the waste created when its products are discarded by consumers.[13] The improper disposal of e-waste, such as computers, DVD players, and cell phones, negatively affects the environment by releasing toxic materials, such as lead and mercury, into soil and water, which later affects human, animal, and vegetation health.[14]

In October 2007, Toshiba signed a contract with China’s Tsinghua University to form a research facility focusing on energy conservation and the environment. The new Toshiba Energy and Environment Research Center, where 40 students from the university will research electric power equipment and new technologies that will help stop the global warming process, is located in Beijing. Through this partnership, Toshiba hopes to develop products that will better protect the environment and save energy in China by reducing pollution from automobiles and creating power sources that do not negatively affect the environment.[15]