Rock art is a term in archeology for any man-made markings made on natural stone; most often it refers to markings and paintings on rocks made by Paleolithic and Mesolithic human beings. Rock art can be found across a wide geographical and temporal spread of cultures perhaps to mark territory, to record historical events or stories, or to help enact rituals.

Some art seems to depict real events whilst many other examples are apparently entirely abstract. The phenomenon is thought by many to be the foundation of art as well as an indication of the development of cognitive and abstract ability in the evolution of humankind, as most rock art is thousands of years old, created before the advent of the first major civilizations. While we may not understand the purpose for these markings, we can appreciate and enjoy their beauty, admiring the creativity of those from long-ago eras. 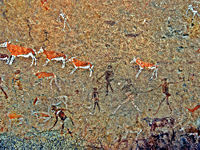 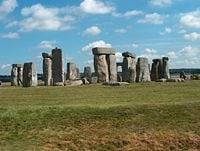 The Stones of Stonehenge

Traditionally, individual rock markings are called motifs and groups of motifs are known as panels. Sequences of panels are treated as archaeological sites. This method of classifying rock art, however, has become less popular as the structure imposed is unlikely to have had any relevance to the art's creators. Even the word 'art' carries with it many modern prejudices about the purpose of the features.

Rock art can be divided into three distinct categories: 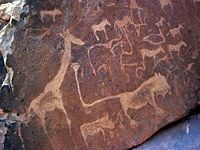 Lion Petroglyph, Twyfelfontein, Namibia
Did you know?
The many possible meanings of prehistoric rock art include records of hunts, religious practices, and astronomical calendars

The meaning of rock art and why it was practiced by many cultures has been discussed without conclusion since scholars first began studying these markings and paintings. The phenomenon has been regarded as the foundation of art as well as an indication of the development of cognitive and abstract thinking ability in humankind, as most rock art is thousands of years old, created before the advent of the first major civilizations.[2]

Many pictographs and petroglyphs depict animals, images of nature, and hunting. Some have argued that such images are records of hunts that served not only to inventory the amount of animals killed as well as future references for animal migrating patterns.[3]

Others argue that there are religious elements to rock art. Shamanism was the predominate religion when most rock art was created, and so many speculate that in rock art could be the recording of religious practices and beliefs.

Common features in rock art that are related to portraying shamans were bones and other skeletal remains on their coats. One reason for the bones would be that they were used as a type of armor for protecting the shaman on his journeys through different worlds. Another interpretation offered is that these skeletal elements are "representations of a shaman brought back to life after the dismemberment that occurs during the initiation process: the depicted bones thus refer to the wearer’s own skeleton."[4] 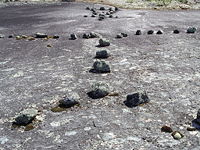 Some petroforms may have been used as astronomical calendars, with rocks aligned to solstice and equinox sunrises and sunsets. They are often found in higher areas, on hills, mounds, ridges, and natural rock formations. Higher ground allowed humans to carefully observe the horizon to mark and measure astronomical events. Some rock alignments point out four or more directions, lunar events, the rising and setting of planets, the stars, and other astronomical events. Some petroforms can also be used in more complex ways for astronomical predictions, mapping of the sky and ground, and for complex ceremonies that help to memorize many oral stories. Petroforms are similar in some ways to medicine wheels which are also aligned with sunrises and sunsets, equinoxes, solstices, lunar events, and star patterns.

Petroforms also mirrored the night sky, and the patterns of the stars, similar to astrological signs and symbols.[5] The Sioux have oral stories of the serpent in the sky, a turtle, a bear, and other patterns seen in the stars. What is often known today as Orion's belt was one prominent star formation, along with the central and stationary North Star, now named Polaris. Other interpretations include geographic markers, hunting aids and, in the case of dolmens, burial structures.