This article is about the communities of apartment-like structures in the Southwestern United States of America. For the people who live in these communities, see Pueblo People. 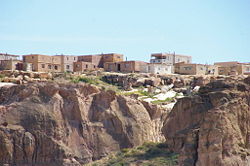 Pueblo is a term used to describe modern (and ancient) communities of Native Americans in the Southwestern part of what is now the United States of America. The first Spanish explorers of the Southwest used this term to describe communities that consisted of apartment-like structures made from stone, adobe mud, and other local material, which provided excellent insulation from cold in winter and heat in summer. They were usually multi-storeyed buildings surrounding an open plaza and were occupied by hundreds to thousands of Pueblo People. Designed for defense as well as shelter, pueblos were often built atop steep mesas. Another defensive aspect was a lack of doors on the ground level, requiring entry from the roof top reached by ladders that were withdrawn in times of danger. Today, pueblos have doors on the ground level. Pueblo People still inhabit a number of these villages, which date back a thousand years making them the oldest continuously occupied dwellings in North America.

In the early twentieth century, Pueblo Revival Style, an architectural style that seeks to imitate the appearance of traditional adobe construction, became popular and remains so to this day. Buildings in this style range from single homes to larger structures designed as hotels, libraries, and university buildings.

The Spanish word pueblo, evolved from the Latin word populus (people), meaning "town." The Spanish explorers discovered Native Americans living in these clusters of dwellings when they reached the Southwest in the sixteenth century:

On the central Spanish meseta the unit of settlement was and is the pueblo; that is to say, the large nucleated village surrounded by its own fields, with no outlying farms, separated from its neighbours by some considerable distance, sometimes as much as ten miles or so. The demands of agrarian routine and the need for defence, the simple desire for human society in the vast solitude of the plains, dictated that it should be so. Nowadays the pueblo might have a population running into thousands. Doubtless they were smaller in the early middle ages, but we should probably not be far wrong if we think of them as having had populations of some hundreds.[1]

In the local language of the inhabitants, the pueblo is referred to as "the village." 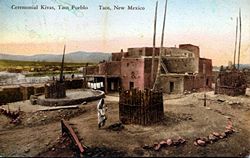 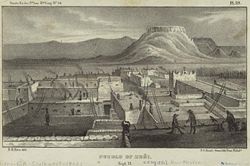 Pre-Columbian towns and villages in the Southwest were located in defensive positions, for example, on high steep mesas such as Acoma. Their large, multi-family houses were called pueblos by the Spanish when they arrived in the sixteenth century. These early residents of the area are often referred to as puebloan cultures: "The Late Puebloan cultures built the large, integrated villages found by the Spaniards when they began to move into the area."[2]

In fact, both Native Americans and Spaniards shared the same architectural answers to the problems met when living in areas with low rates of rainfall and a wide variation in temperature, namely the construction of houses with clay or stone walls and flat, beam supported, earth-covered roofs.[2] The differences between the two architectures lay not in the method, but in the design:

The Pueblo Indians constructed a house incorporating their own standards of room size and proportions, squareness, wall thickness, overall height, the relationship between rooms, and the size, shape, location, and design of doors and windows. All of these differed from the standards a Spaniard would have employed in building a house. Spanish and Pueblo Indian builders in New Mexico used the same methods to roof a room or make a beam over a doorway, but these methods had to serve different cultural needs, and, therefore, differed in many details.[2]

The buildings in these pueblos were designed to provide defense. Thus, many were built atop mesas. The design of the buildings appears to be modeled after the Ancestral Pueblo culture (Anasazi) cliff dwellings, houses built in shallow caves and under rock overhangs along the canyon walls. The structures contained within these alcoves were mostly blocks of hard sandstone, held together and plastered with adobe mortar.

Did you know?
Pueblos are among the oldest continuously inhabited settlements in the US

The walls of pueblo buildings are made of limestone blocks or large adobe bricks made from clay and water. These walls were often several feet thick, as a defensive measure as well as providing excellent insulation, keeping the rooms inside warm in winter and cool in summer. Buildings were as much as five or six stories tall, with each higher floor set back from the floor below it resulting in a step pyramid type design. Access to the rooms on lower floors was by ladders on the outside to the roof, and then down an inside ladder. In case of an attack, the outside ladders could be pulled up easily.

In addition to living space, pueblos also include kivas, or ceremonial rooms, as well as a central courtyard. 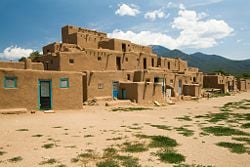 The people of some pueblos still inhabit centuries-old adobe pueblo buildings.[3] Acoma Pueblo, also known as "Sky City," was built on top of a 367-foot (112 m) sandstone mesa in New Mexico. Settled around 1100, it is one of the oldest continuously inhabited communities in the United States.

Taos Pueblo is another ancient pueblo, approximately 1000 years old. The church at Taos Pueblo is the newest building in the pueblo having been built in 1850 to replace the original pueblo church which was destroyed by the US army in 1847.

There are 21 federally recognized Pueblos[4] that are home to Pueblo people: 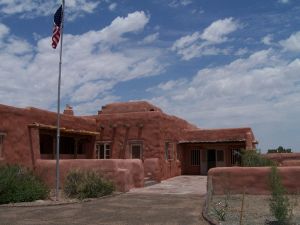 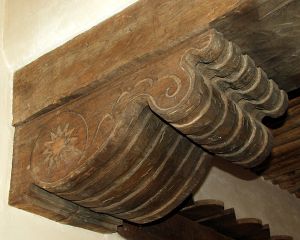 The Pueblo Revival Style is a regional architectural style of the Southwestern United States which draws its inspiration from the Pueblos and the Spanish missions in New Mexico. The style developed at the turn of the twentieth century and reached its greatest popularity in the 1920s and 1930s, though it is still commonly used for new buildings. Pueblo style architecture is most prevalent in the state of New Mexico.

Although the regional architecture from which the Pueblo Style draws its inspiration is confined to New Mexico and parts of Arizona, the style first appeared in California. Boston architect A. C. Schweinfurth used it for a number of his buildings in California, beginning with a hotel in Ventura which was completed in 1894.[5]

The Pueblo Revival Style made its first appearance in New Mexico at the University of New Mexico in Albuquerque, where it was adopted by president William G. Tight for a number of projects completed during his tenure. The best-known of these was his 1908 remodeling of Hodgin Hall, though a new heating plant and the Estufa, a fraternity house, were completed earlier. Nearly all subsequent university buildings have also employed the Pueblo style, albeit in increasingly loose interpretations.[6]

The other stronghold of Pueblo style architecture is Santa Fe, where it was popularized in the 1920s and 1930s by a group of artists and architects seeking to establish a unique regional identity, and in particular to distinguish themselves from the spreading image of Southern California. Such was its popularity that it is often referred to as the "Santa Fe Style."[7] In 1957 a committee led by architect John Gaw Meem drafted the Historical Zoning Ordinance, which mandated the use of the Pueblo Style or Territorial Style on all new buildings in central Santa Fe. This ordinance remains in effect, meaning the Pueblo Style continues to predominate.[8]

Pueblo style houses are still frequently constructed in Albuquerque, Santa Fe, and elsewhere. Updated versions of the style have also been used for newer commercial and public buildings such as the Albuquerque International Sunport terminal (1966) and the newer University of New Mexico buildings.

Aviation pioneer, Glenn Curtiss brought the Pueblo Revival style to Florida when he had his house in Miami Springs built in 1925. Designed by prominent Miami architect, Martin Luther Hampton, the house is constructed of hollow clay tile with a rough textured stucco exterior. The roof is flat with very irregular parapet walls embellished by projecting waterspouts and irregular shaped openings. The main entrance is set within a deeply recessed T-shaped opening and marked by a flat-roofed porte cochere.

Pueblo style architecture seeks to imitate the appearance of traditional adobe construction, though more modern materials such as brick or concrete are often substituted. If adobe is not used, rounded corners, irregular parapets with rainwater spouts, and thick, battered walls are used to simulate it. Walls are usually stuccoed and painted in earth tones. The door and window openings are deep and the windows simple. The floors are made of brick, wood, or sandstone.

Multistory buildings usually employ stepped massing similar to that seen at Taos Pueblo. Roofs are always flat. A common feature is the use of projecting wooden roof beams (vigas).[5] Latillas, peeled sticks used as a traditional ceiling material, are often placed in an angled pattern above the vigas.

Pueblo revival style may also incorporate several features due to Spanish influence, such as elaborate corbels, porches held up with zapatas, and enclosed patios.

"Contemporary Pueblo" style is simpler and less ornamented, without posts, beams, or vigas.