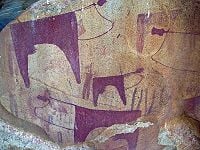 Cave or Rock Paintings are paintings on cave or rock walls and ceilings, usually dating to prehistoric times. The earliest known rock paintings are dated to the Upper Paleolithic, approximately 40,000 years ago. The purpose of the cave paintings is not known, and may never be. The evidence suggests that they were not merely decorations of living areas, since the caves in which they have been found do not have signs of ongoing habitation. Also, they are often in areas of caves that were not easily accessed.

Some theories hold that cave paintings may have been a way of transmitting information, while other theories ascribe them a religious or ceremonial purpose. There are many common themes throughout the many different places that the paintings have been found; implying the universality of purpose and similarity of the impulses that might have created the imagery. Various conjectures have been made as to the meaning these paintings had to the people who made them. Prehistoric men may have painted animals to "catch" their soul or spirit in order to hunt them more easily, or the paintings may represent an animistic vision and homage to surrounding nature, or they may be the result of a basic need of expression that is innate to human beings, or they may be recordings of the life experiences of the artists and related stories from the members of their circle. While we may not fully understand the purpose for these paintings, we can appreciate and enjoy their beauty, admiring the creativity of those from long-ago eras.

A rock painting of a turtle in what is known as X-ray style—with some internal organs.

Cave paintings are a form of Rock art, falling under the category of pictograph, or the application of pigments to a rock surface. Survival of ancient cave paintings is attributable to use of mineral pigments, most commonly manganese, hematite, malachite, gypsum, limonite, clays, and various oxides. The best preserved pictography is found under sheltering overhangs and in caves. The simplest pictographs are wet clay finger drawings and charcoal drawings. To produce crayons or paints first the minerals had to be finely ground and combined with binding materials. Crayons and animal hair brushes have been excavated in caves with paintings. Exceedingly fine lines evidence the production of excellent brushes. The most common rock art element found around the world, the human hand, exemplifies several pictography types. A technique used since the Neolithic is spraying around a hand, resulting in a negative image. The more common positive print was often made with pigment applied to the hand and transferred to the rock.

Did you know?
Cave paintings probably had a religious or informational purpose rather than being purely decorative

What rock art means and why the ancients practiced it has been a bane of contention amongst scholars since the phenomena started to be studied. Some have argued that such images are records of hunts that served not only to inventory the amount of animals killed as well as future references for animal migrating patterns.[1] Henri Breuil interpreted rock paintings as being hunting magic, meant to increase the number of animals killed by hunting parties.[2]

An alternative theory, developed by David Lewis-Williams and broadly based on ethnographic studies of contemporary hunter-gatherer societies, is that the paintings were made by Cro-Magnon shamans. The shaman would retreat into the darkness of the caves, enter into a trance state and then paint images of their visions, perhaps with some notion of drawing power out of the cave walls themselves. This goes some way toward explaining the remoteness of some of the paintings (which often occur in deep or small caves) and the variety of subject matter (from prey animals to predators and human hand-prints).

R. Dale Guthrie has studied not only the most artistic and publicized paintings but also a variety of lower quality art and figurines, and he identifies a wide range of skill and ages among the artists.[3] He also points out that the main themes in the paintings and other artifacts (powerful beasts, risky hunting scenes, and the over-sexual representation of women in the Venus figurines) are to be expected in the fantasies of adolescent males, who constituted a large part of the human population at the time. However, Merlin Stone, in her book When God Was a Woman, suggested that many scholars and archaeologists impose modern sexist views on ancient findings.[4] Considering the prevalence of Goddess worship (beginning between 7,000 and 25,000 B.C.E.), it is probable that art depicting the fullness of a woman's body was not a teenage male's fantasy but reproductions done in praise of women by artists of either sex.[4] As with all prehistory, it is impossible to be certain because of the relative lack of material evidence and the many pitfalls associated with trying to understand the prehistoric mindset.

Graham Hancock's Supernatural: Meetings with the Ancient Teachers of Mankind explores the various theories on the interpretation of rock art, and provides extensive references. He concludes that recent theory linking shamanic and religious practices with cave painting throughout the world appear the most credible.[5] 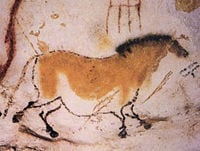 The first cave paintings to be discovered were in Europe, where soon afterwards, many more sites uncovered. Some of the most famous European sites are:

Rock painting was also performed on cliff faces, but fewer of those have survived because of erosion. One well-known example is the rock paintings of Astuvansalmi in the Saimaa area of Finland.

The age of the paintings in many sites has been a contentious issue, since methods like radiocarbon dating can be easily misled by contaminated samples of older or newer material[6] and caves and rocky overhangs (parietal art) are typically littered with debris from many time periods. Recent advances make it possible to date the paintings by sampling the pigment itself.[7] The choice of subject matter can also indicate date such as the reindeer at the Spanish cave of Cueva de las Monedas which imply the art is from the last Ice Age. The oldest cave art, found in Cave of El Castillo in the Cave of Altamira and Paleolithic Cave Art of Northern Spain site, are decorations in red ochre in the forms of hand stencils (from as far back as 35,300 B.C.E.) and dots. One dot has been dated to 40,800 B.C.E., making it the oldest dated cave decoration in the world as of 2012.[8][9] These examples are several thousand years older than the previously oldest paintings found in Chauvet Cave.[10] Other examples may date as recent as the Early Bronze Age, but the well known prolific and sophisticated style from Lascaux and Altamira died out about 10,000 years ago, coinciding with the advent of the neolithic period.

Rock paintings from the Western Cape

At Ukhahlamba-Drakensberg, South Africa, now thought to be some 3,000 years old, the paintings by the San people who settled in the area some 8,000 years ago depict animals and humans, and are thought to represent religious beliefs.

An archeological team discovered the Laas Gaa'l cave paintings outside Hargeisa in Somaliland.[11] They show the ancient inhabitants of the area worshiping cattle and performing religious ceremonies.

Cave paintings are found in the Tassili n'Ajjer mountains in southeast Algeria also in the Akakus, Messak Settafet and Tadrart in Libya and other Sahara regions including Ayr mountains, Niger and Tibesti, Chad.

The Rock Paintings of Sierra de San Francisco is the name given to prehistoric rock art found in the Sierra de San Francisco region of Baja California, Mexico, created by a people referred to as Cochimi or Guachimis. There are some 250 sites which are located in the municipality of Mulege within the El Vizcaino Biosphere Reserve in the state of Baja California Sur in Northern Mexico. Motifs include human figures, weapons, and animal species such as rabbit, puma, lynx, deer, wild goat/sheep, whale, turtle, tuna, sardine, octopus, eagle, and pelican; there are also abstract elements of various forms. The paintings vary in age from 1100 B.C.E. to 1300 C.E.

The paintings are noted for their high quality, extent, the variety and originality of human and animal representations, remarkable colors, and excellent state of preservation. The rock paintings of Sierra de San Francisco were nominated in 1989 and became a World Heritage Site in 1993.[12]

A male hunter or warrior.

Significant early cave paintings have also been found in Kakadu National Park in Australia. The park has a large collection of ochre paintings. Ochre is a not an organic material, so carbon dating of these pictures is impossible. Sometimes the approximate date, or at least, an epoch, can be guessed from the content.

There are rock paintings in caves in India,[13] Thailand, Malaysia, and Indonesia.

In Thailand, caves and scarps along the Thai-Burmese border, in the Petchabun Range of Central Thailand, and overlooking the Mekong River in Nakorn Sawan Province, all contain galleries of rock paintings.

In Malaysia the oldest paintings are at Gua Tambun in Perak, dated at 2000 years, and those in the Painted Cave at Niah Caves National Park are 1200 years old.

In Indonesia the caves at Maros in Sulawesi are famous for their hand prints, also found in caves in the Sangkulirang area of Kalimantan.