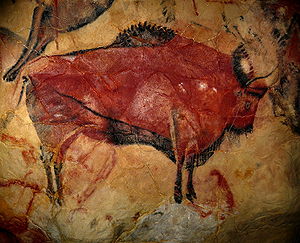 Cave painting of a Bison from Altamira

Altamira (Spanish for “high view”) is a cave in Spain famous for its Upper Paleolithic cave paintings featuring drawings and polychrome rock paintings of wild mammals and human hands. It is located near the town of Santillana del Mar in Cantabria, Spain, 30 kilometers (19 miles) west of the city of Santander. The cave with its paintings was declared a World Heritage Site by UNESCO in 1985. In 2008 the World Heritage Site was expanded to include 17 additional caves located in northern Spain, which contain prominent examples of Paleolithic rock art. The site was renamed Cave of Altamira and Paleolithic Cave Art of Northern Spain on the World Heritage List.

Although no longer open to the public—a measure necessary to protect the magnificent artwork—replicas of the caves and a museum presenting artifacts and other materials allow visitors to experience a taste of life in prehistoric times. The beauty of the artwork allows the public to appreciate early human ancestors, and thus brings humankind closer together as one family, including not only those alive on the earth today but also those from ages long past.

The cave at Altamira is 270 meters long and consists of a series of twisting passages and chambers. The main passage varies from two to six meters high. The cave was formed through collapses following early karstic phenomena in the calcerous rock of Mount Vispieres.

Archaeological excavations in the cave floor found rich deposits of artifacts from the Upper Solutrean (dated at approximately 18,500 years ago) and Lower Magdalenian (dated between 16,500 and 14,000 years ago) periods. The cave was occupied only by wild animals in the long period between these two occupations. It can be assumed that the site was well positioned to take advantage of the rich wildlife that grazed in the valleys of the surrounding mountains as well as permitting the occupants to supplement their diet with food from nearby coastal areas. Around 13,000 years ago a rockfall sealed the cave's entrance, preserving its contents until its eventual discovery which was caused by a nearby tree falling and disturbing the fallen rocks.

Human occupation was limited to the cave mouth, although paintings were created throughout the length of the cave. The artists used charcoal and ochre or haematite to create the images, often scratching or diluting these dyes to produce variances in intensity and creating an impression of chiaroscuro. They also exploited the natural contours in the cave walls to give a three-dimensional effect to their subjects. The Polychrome Ceiling is the most impressive feature showing a herd of bison in different poses, two horses, a large hind, and a possible wild boar. These animals are portrayed in combinations that do not appear in more modern animals of those types. These are pictures of animals without any horizontal or basal reference, as we view only the animals themselves.

The art dated to the Magdalenian occupation includes the paintings described above as well as abstract shapes. Solutrean paintings include images of horses, goats, and hand prints created from the artists placing their hands on the cave wall and applying paint over them leaving a negative image of the palms. Numerous other caves in northern Spain contain Palaeolithic art but none is as advanced or well-populated as Altamira.

Did you know?
Altamira is the only cave where paintings extend into the area where the occupants lived.

Altamira is the only cave where paintings extend into the area where the occupants lived. The art in these caves is much more developed than those found in similar caves. These people used color, while other caves are only monochrome. This cave does not have the soot that other such caves have, which may indicate that these people were able to secure better materials to illuminate and cook with. The artists also utilized the face of the rocks into the creation of the painting itself in order to create a more three dimensional feeling in the paintings. This lends the painting a more immediate impact on the viewer than those seen in other caves dated around the same period. The cave was found by a local hunter, Modesto Peres, in 1868. Previously to that, rocks had sealed the cave and helped in its preservation. Around that time, a tree fell and dislodged the rocks, making the cave accessible. Everybody knew about the cave, and used it in inclement weather or for resting while hunting, but it was not until 1879 that María Justina Sanz de Sautuola turned her father's attention to the images of animals on the ceiling, barely discernible in the darkness. As an amateur archaeologist, Marcelino Sanz de Sautuola was fascinated.

The cave was excavated by Sautuola and archaeologist Juan Vilanova y Piera from the University of Madrid, resulting in a much acclaimed publication in 1880 which interpreted the paintings as paleolithic in origin. However, French specialists, led by Gabriel de Mortillet and Emile Cartailhac, were particularly adamant in rejecting the hypothesis of Sautuola and Piera, and the findings were loudly ridiculed at the 1880 Prehistorical Congress in Lisbon. Due to the supreme artistic quality, and the exceptional state of conservation of the paintings, Sautuola was even accused of forgery. A fellow countryman maintained that the paintings had been produced by a contemporary artist, on Sautuola's orders.

It was not until 1902, when several other findings of prehistoric paintings had served to render the hypothesis of the extreme antiquity of the Altamira paintings less offensive, that the scientific society retracted their opposition to the Spaniards. That year, Emile Cartailhac emphatically admitted his mistake in the famous article, "Mea culpa d'une sceptique," published in the journal L'Anthropologie. Sautuola, however, having died 14 years earlier, did not live to enjoy the restitution of his honor.

Further excavation work on the cave was done by Hermilio Alcalde del Río in 1902-1904, the German Hugo Obermaier in 1924-1925, and finally by Joaquín González Echegaray in 1981. The cave was closed to the general public at the time, but as an outstanding anthropologist, he was granted access for his research. 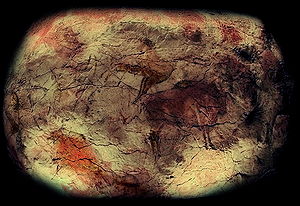 During the 1960s and 1970s, the paintings became damaged by the carbon dioxide in the damp breath of large numbers of visitors. Altamira was completely closed to the public in 1977, and reopened to limited access in 1982. Very few visitors were allowed in per day, resulting in a three-year waiting list.

The cave itself was closed again in 2002 to prepare a better plan for on-going conservation as well as better studies of the treasure. Access to the cave was restricted to a small number of people in the fields of conservation and research. Archaeologists for the Altamira Museum created a four-year project to study the cave by comparative methods. They found other sites of similar chronology and character in the area, and studied them in order to develop the protocols and methodology that would in the future be used in the cave itself. Plans were made to reopen the cave to the public in 2010, but it was decided to maintain the access restrictions and keep the cave closed.

A replica cave and museum were built nearby, completed in 2001 by Manuel Franquelo and Sven Nebel, effectively reproducing the cave and its art.

The replica allows a comfortable view of the polychrome paintings of the main hall of the cave, as well as a selection of minor works. The museum displays Paleolithic tools, musical instruments, and other objects as well as a number of exhibits that present life in prehistoric times.[1] There are other replicas in the National Archaeological Museum of Spain (Madrid), in the Deutsche Museum in Munich, and in Japan.

Altamira was one of many discoveries that helped reverse our ideas of life in the Paleolithic period. Previously, several attempts had been made to depict these early people as being more non-human than human. Many discoveries of art, and lifestyle helped reverse this image. The caves of Altamira were important in that respect.

Modern painters have been influenced by the Altamira cave paintings. After a visit, Pablo Picasso exclaimed "after Altamira, all is decadence." In Spain, images similar to those depicted appear in various popular items. Steely Dan, a rock band, wrote a song for the caves, entitled "The Caves of Altamira."