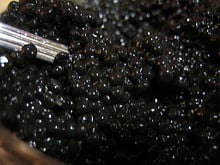 Caviar is the processed, salted roe of certain species of fish, most notably the sturgeon whose eggs have the appearance of shiny black pearls. It is commercially marketed worldwide as a delicacy and is eaten as a garnish or a spread, often as an hors d'œuvre. Caviar is synonymous with luxury—historically the favorite of the Russian elite, and today highly priced due to the short supply of sturgeon.

Once a popular food, particularly in the United States, high consumption of caviar led to over-fishing and the near extinction of sturgeon. Other environmental changes, some natural and others like pollution due to human negligence, led to reduction of sturgeon populations in the Caspian Sea. Limits have been imposed on sturgeon fishing. The self-centered desire for luxury, however, continued to sustain a black market and poaching. Alternatives, including aquaculture of sturgeon as well as the use of different fish such as salmon, paddlefish, lumpfish, and whitefish for cheaper alternatives, have developed in an effort to protect the sturgeon and still allow the delicacy of caviar to be enjoyed.

Caviar is the roe or eggs taken from freshly caught fish, sturgeon for true caviar. One of the oldest families of bony fish in existence, sturgeon are native to rivers, lakes, and coastlines of Eurasia and North America, in particular the Caspian Sea which borders two major caviar-producing countries Russia and Iran. They are distinctive for their elongated bodies, lack of scales, and occasional great size: Sturgeons ranging from 7–12 feet (2-3½ m) in length are common, and some species grow up to 18 feet (5.5 m). Most sturgeons are anadromous, spawning upstream in freshwater and feeding in saltwater river deltas and estuaries. Because they are slow-growing and mature very late in life, they are particularly vulnerable to exploitation and to other threats, including pollution and habitat fragmentation.

Sturgeon eggs have the appearance of shining black pearls. The eggs are removed, killing the fish. They are then passed through a fine mesh in order to remove fatty tissue and membrane. Classification of the eggs is based on size and color. The highest quality caviar are from beluga, ossetra, and sevruga sturgeon.

The eggs are lightly salted to bring out the flavor and also to preserve them. The Russian word malossol ("little salt") is used to show that the caviar is minimally salted; typically, caviar is four to eight percent salt. Less salt means the roe was of higher quality, and thus more expensive. However, it is also more perishable.

Caviar may also be made from other fish, such as salmon, lumpfish, and whitefish. The salmon roe are red, while the roe of lumpfish may be died black to resemble sturgeon eggs. 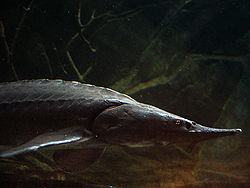 The word caviar is ultimately derived from Persian khavyar, from khaya meaning "egg." The word first appeared in English print in 1591.[1]

A record of caviar, eggs of the sturgeon brought into banquets with great fanfare, dates back to the fourth century B.C.E. Greek scholar Aristotle. The preparation of caviar by salting the roe of sturgeon is attributed to the Persians. However, it was Russian tsars who brought caviar into the world of luxury.

Caviar was known in Russia in the twelfth century, with the fishermen of the Volga River recognizing the krasnaya ryba ("beautiful fish") as the most valuable.[2] In the sixteenth century it was delivered to the European royal court as well as the Russian imperial table.[3]

By the nineteenth century, Russian caviar was a luxury item throughout the international market. Iran, on the southern shores of the Caspian, began its own caviar industry also producing the delicacy at the highest standard. An entrepreneurial immigrant, Henry Schacht, founded the American caviar business in 1873, using Delaware River sturgeon.[2] The United States became the largest caviar producer outside Russia, with much of it exported to Europe. Caviar became so popular in the U.S. at that time that it was served free in saloons, its salty taste encouraging customers to drink more, and more refined establishments offered caviar as an interesting starter to elegant meals. By 1910, the sturgeon was nearly extinct in American waters due to over-fishing, and American production was halted; caviar once again becoming a luxury item.

Throughout the twentieth century the Caspian Sea was the major supplier of sturgeon roe for caviar. However, the Caspian also suffered pollution, poaching, and over-fishing, all reducing sturgeon populations. In 1998, the sturgeon came under the protection of the Convention on the International Trade in Endangered Species of Wild Flora and Fauna (CITES). Regulation of international trade in sturgeons was initiated as "an important step to ensure long-term conservation and better management of the species—and essential to preserve the resource for future generations."[4] However, poaching and black market caviar continued to flourish along the Caspian.[2] As a result of further CITES review in 2001, recommendations were made to severely limit, including complete bans, on wild fish harvesting in an effort to end the unsustainable exploitation of sturgeon.

In September 2005, the United States Fish and Wildlife Service banned the import of Caspian Sea Beluga caviar, to protect the endangered Beluga sturgeon; a month later, the ban included Beluga caviar from the entire Black Sea basin. In January 2006, CITES announced they were "unable to approve the [caviar] export quotas" for 2006 from wild fish stocks.[5]

Limits and reductions in the wild fish harvesting resulted in significant increases in caviar prices, leading to efforts to find alternatives to Caspian sturgeon. Aquaculture of sturgeon has been found to be an economically viable means of sustainable, commercial caviar production, especially in Spain, France, Uruguay, and California.[6] 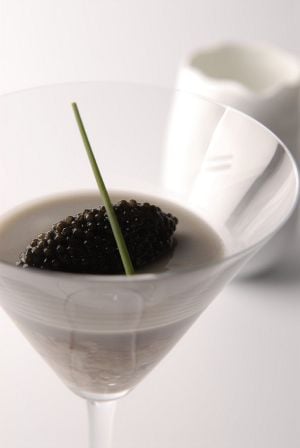 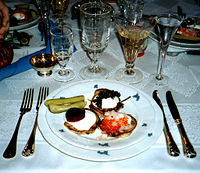 The best caviar is served unadorned, and eaten with a non-metal spoon. Traditional caviar spoons are made from mother of pearl, although bone and tortoiseshell material are also used. It is considered impolite to eat more than one or two spoonfuls of caviar, even when ample quantities are available. Caviar may be tasted by placing a little on the back of the hand.

Caviar is often served as an hors d'oeuvre, in a variety of canapé forms. Toast points or a very small, thinly sliced baguette may be used. Potatoes and eggs also make good caviar vehicles. The classic Russian combination is caviar and blini, served with sour cream.

Given its high price in the West, caviar is synonymous with luxury and wealth. In Russia and other Eastern European cultures, though still expensive, caviar is commonly served at holiday feasts, weddings, and other festive occasions. In Hong Kong and Japan, caviar may be found on sushi and is often very affordable. 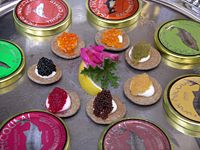 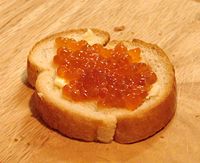 The Caspian Sea, bordered by Azerbaijan, Iran, Russia, and Kazakhstan, is considered the source of the finest caviar in the world. The golden Sterlet caviar, the rarest of caviars, was the favorite of tsars, shahs, and emperors. Today, the highest prices are paid for the Beluga, Ossetra, and Sevruga sturgeon varieties of caviar.

Due to cost and problems with the dwindling supply of sturgeon, alternative forms of "caviar" are commonly prepared from salmon, producing red caviar, lumpfish, and whitefish.

Beluga caviar, the most expensive of caviar, (branded as Almas caviar in Iran meaning "Diamond caviar") consists of the roe (or eggs) of the Beluga sturgeon (Huso huso) found primarily in the Caspian Sea. It can also be found in the Black Sea basin and occasionally in the Adriatic Sea. This fish has been classified an endangered species, causing the United States Fish and Wildlife Service to ban the importation of Beluga caviar which originated in the Black Sea basin. In January 2007, this ban was partly lifted, allowing the sale of 96 tons of caviar, 15 percent below the official 2005 level.[7]

The Beluga sturgeon can take up to 20 years to reach maturity, and can reach a size of 2000 pounds. The eggs themselves are the largest of the commonly used roes, and range in color from light blue to black, with the lighter colors coming from older fish, and being the highest valued. Any additions by producers diminish the value of the roe, and the caviar usually reaches the market without any additions or processing.

Beluga caviar is usually handled with a spoon made of mother of pearl, bone, or other non-metallic material, as metal utensils tend to impart an unwelcome metallic taste to the delicate and expensive roe. Unlike less expensive varieties, Beluga caviar is usually served by itself on toast whereas other caviars can be served in a variety of ways, including hollowed and cooked new potatoes, on blini, or garnished with sour cream, crème fraîche, minced onion, or minced hard boiled egg whites. The higher grade caviars, including Beluga, usually need very little embellishment.

Ossetra (Osetra or Asetra) caviar comes from the Ossetra sturgeon (Acipenser gueldenstaedtii), weighing 50-400 pounds and living up to 50 years. Ossetra caviar ranges in color from warm brown to green-gray, dark blue to jet black, or even white. Ossetra caviar has a nutty flavour and is prized as an elite caviar.

It is of firmer texture than the more delicate Beluga caviar. Golden Ossetra is a rare form of Ossetra caviar. It is golden-yellow in color and has a very rich flavor.

Ossetra caviar is traditionally served on buttered toast points with fresh, minced onion. It also is served on blini, and sometimes cream cheese or sour cream accompanies the caviar on crackers.

Sevruga is one of the highest priced varieties of caviar, eclipsed in cost only by the Beluga and Ossetra varieties. It is harvested from the Sevruga sturgeon native to the Caspian Sea, and may be distinguished from its more expensive cousins by the size of the eggs, which are generally smaller. 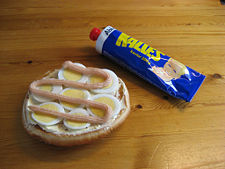 Dwindling fishing yields of sturgeon consequent to overfishing and pollution have resulted in the creation of a variety of less costly caviar-quality roe alternatives. "Hackleback" caviar from the Shovelnose sturgeon, the smallest species of freshwater sturgeon native to the United States, is a popular, inexpensive product of this industry. American Paddlefish, a sturgeon cousin, one of the largest freshwater fish in North America, is also farmed as an alternative source of roe for caviar. Whitefish and the North Atlantic salmon are also popular sources of caviar roe.

A sturgeon caviar imitation is Danish black colored lumpsucker caviar, which is sold throughout Europe in small glass jars. It can also be found red colored. A more expensive caviar alternative, sold in Sweden and Finland, is the caviar from the vendace whitefish. In Finland, caviars from the burbot and the common whitefish are also sold. Also in Scandinavia a significantly cheaper version of caviar, made from mashed and smoked cod roe, is sold in tubes as a sandwich filling. When sold outside Scandinavia, this product is referred to as "creamed smoked roe."

Algae-based imitation caviar is produced and sold as a vegetarian caviar alternative.