Caviidae is a diverse family of South American rodents characterized by a short or rudimentary tail, large head, and continuously growing, flat-crowned jaw teeth, with twenty teeth in total. Well-known members are the domestic guinea pig and the capybara (although the capybara is sometimes placed in its own family of Hydrochaeridae). The family includes both members with stout bodies, short limbs, and short ears, and members with more rabbit-like bodies with long ears and long limbs.

Cavy (plural cavies) is the common name often applied to members of this family, although this term may be more specifically applied only to certain members of Caviidae, and in particular members of the genus Cavia. The more technical name used for members of this family are caviids (sometimes cavids). There are about six genera and 15 species in Caviidae. They are found across the South American continent, in open areas from moist savanna to thorn forests or scrub desert.

Members of Caviidae provide important ecological functions as part of food chains, consuming largely plant material and being preyed upon by various mammals, birds of prey, and reptiles (such as caimans and anacondas). For humans, they also provide important functions, with larger members being used for food and skins and some caviids, particularly the guinea pig, used as pets. The guinea pig may have been domesticated for over three thousand years and it continues to be raised in some areas of South America for food; the ancient Incas apparently also used it in religious ceremonies. The easy to raise and handle guinea pig also is a common animal for scientific research. 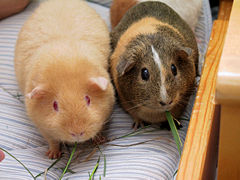 Guinea pigs (Cavia porcellus) belong to the subfamily Caviinae of the family Caviidae.

Members of the rodent family Caviidae are morphologically diverse. Some are stockily built with short legs, while others are rabbit-like with slender and long-legs. Some have sharp, clawed digits while others have hoof-like nails. Some appear tailless, with but a vestigial or rudimentary tail, while others have a short tail. While the fur is typically short, some have long hair (Honeycut 2004).

Likewise, caviids also range considerably in size from just 200 grams (7 ounces) and a head and body length of just 150 millimeters (5.9 inches) to those weighing 16 kilograms (35.3 pounds) and 750 millimeters in length (29.5 inches). When capybaras are also included in Caviidae, as is common in current taxonomies, the upper range is expanded considerably, as capybaras are the largest extant rodents. They may grow more than four feet (130 centimeters) long and 50 centimeters tall (1.6 feet), and commonly weigh more than 50 kilograms (110 pounds) (NZP 2007; Magalhaes 1992). Even larger forms existed in the Pliocene, such as Phugatherium, which was about the size of a tapir (Savage and Long 1986).

Among characteristics that unite the members of Caviidae are the presence of twenty total teeth according to the formula 1/1, 0/0/, 1/1, 3/3 and the fact that the teeth of caviids are high-crowned and ever-growing.

The cheek-teeth converge strongly anteriorly and, with the exception of the third molar, all teeth have a pattern of two prisms, formed by one labial and one lingual reentrant fold. The tail is short or vestigial and the skulls have well-developed bullae and a substantial paroccipital process. The mandibles have a masseteric crest that is well-developed and runs high along the sides, separated by a deep groove from the toothrow (Gorog and Myers 2000).

However, some taxonomies recognize only two subfamilies, that of Caviinae and Dolichotinae, and the capybara is placed into its own family, Hydrochaeridae, while Kerodon is variously placed within one of the two subfamilies. Traditionally, the genus Kerodon (rock cavy) has been considered a member of the subfamily Caviinae along with the guinea pigs and other cavies. But more recently, molecular results have suggested that Kerodon is most closely related to the capybara, and that the two evolved from within the Caviidae (Rowe and Honeycutt 2002). This led Woods and Kilpatrick (2005) to unite the two into the subfamily Hydrochoerinae within the Caviidae. Using a molecular clock approach, Opazo (2005) suggested that Kerodon diverged from Hydrochoerus (the capybara) in the late Middle Miocene.

Caviids are broadly distributed throughout South America. They are found from low elevations up to 5000 meters (16, 400 feet) in grassland, semiarid thorn shrub, savanna, forest edge, riperian forest, rocky outcrops, and cultivated areas (Honeycutt 2004). Cavia, with from five to eight species, is the most widely distributed genus, found from Colombia to Argentina. Rock cavies (Kerodon rupestris) is highly adapted for climbing rocks and trees, with its padded feet and nail-like digits; it is confined to rocky outcrops in Brazil (Honeycutt 2004). The mountain cavy, cuis, and mara excavate burrows (Honeycutt 2004).

Caviids are herbivores, eating tough grasses or softer leaves, depending on species.

Females give birth to two or three furred and active young after a gestation period of 50 to 90 days in most species, or 150 days in the capybara. In most species, they are sexually mature within a few months of birth, although in capybaras, maturity is not reached until around 18 months (Herrera et al. 2984).

Social organization varies widely within the group. Many cavies are promiscuous, forming no long-lasting social groups, although, in some species, males maintain harems of two or more females. In contrast, maras are monogamous, and form temporary colonial creches to care for the young of multiple mothers. Capybaras live in groups of around ten individuals, and sometimes many more, each with a single dominant male, and a number of females, subordinate males, and juveniles (Herrera et al. 1984).