Sturgeon is the common name for any of the anadromous and freshwater fish comprising the family Acipenseridae of the Order Acipenseriformes of the Class Actinopterygii, characterized by an elongated body, largely cartilaginous skeleton, rows of bony scutes or plates on the body, four barbels in front of the mouth, and protrusible mouth. The term sturgeon sometimes is more exclusively to refer to the species in the two best-known genera, Acipenser and Huso; more generally, the Order Acipenseriformes, a group that also includes the paddlefishes (family Polyodontidae), is sometimes known as the sturgeon family.

Sturgeons are native to subtropical, temperate, and sub-Arctic rivers, lakes and coastlines of Eurasia and North America. Most sturgeons are anadromous bottom-feeders, spawning upstream and feeding in river deltas and estuaries. While some are entirely freshwater, very few venture into the open ocean beyond near coastal areas.

Some species reach great size and age, including specimens over 18 feet (5.5 meters) in length and more than 100 years old. The freshwater Huso dauricus (kaluga) and the anadromous H. huso (beluga) are among the largest freshwater fish. Acipenseridae is one the oldest families of bony fish in existence and sturgeons are one of the few vertebrate taxa that retains a notochord into adulthood.

Sturgeons provide important economic, ecological, and aesthetic values. Economically, several species of sturgeons are harvested for their roe, which is made into caviar—a luxury food that makes some sturgeons pound for pound the most valuable of all harvested fish. Ecologically, they provide a valuable role in food chains; while the adults are near the top of food chains, threatened only by humans, the young and eggs provide food for a wide variety of aquatic predators, and the sturgeons themselves consume various insects (eg. chironomids), crustaceans, mollusks, and other small invertebrates, as well as fish. Aesthetically, this ancient family of fishes provides a fascination for people.

However, because sturgeons mature late in life and have economically valuable eggs, they are particularly vulnerable to exploitation and to other threats, including pollution and habitat fragmentation. Most species of sturgeons are currently considered to be at risk of extinction, making them more critically endangered than any other group of species. 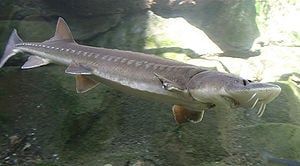 The underside and mouth of a sturgeon

The Order Acipenseriformes includes two extant families: the sturgeons (family Acipenseridae) and the paddlefishes (family Polyodontidae). Members of this order are characterized by a largely cartilaginous structure, an elongated body, an intestine with spiral valve, a heterocercal caudal fin, the absence of gulars, lack of vertebral central, and fin rays more numerous than their basals (Nelson 2006).

The sturgeon family, Acipenseridae, is characterized by five rows of bony scutes or plates on the body, rather than scales; four barbels that precede the inferior and protrusible mouth; the absence of teeth in adults; a large swim bladder; fewer than 50 gill rakers; and pectoral fins with anterior spinous ray made up of fused rays (Nelson 2006). They also have a flattened rostra and elongated upper tail lobes. Collectively, the Acipenseridae family is also known as the true sturgeons. Members of the Acipenseridae differ from the paddlefish family Polyodontidae in that the latter have a paddlelike snout with minute barbels, the presence of minute teeth, and lack the large scutes of the acipenserids but have small "scales" in some regions; in some cases, paddlefish also have long gill rakers, including hundreds of gill rakers in the plankton-feeding Polyodon (Nelson 2006). 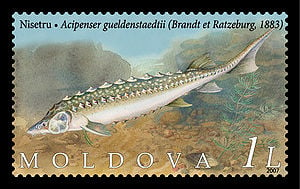 Sturgeons have been referred to as both the Leviathans (connoting great size) and Methuselahs (connoting great age of life span) of freshwater fish. Sturgeons can reach great size; sturgeons ranging from 7–12 feet (2-3½ m) in length are common, and some species grow up to 18 feet (5.5 m). Huso huso (beluga) and H. dauricus (kaluga) may be the largest fish in freshwater. Some beluga in the Caspian Sea reportedly attain over 5.5 m (18 ft) in length (Frimodt 1995). The largest generally accepted record is of a female beluga taken in 1827 in the Volga estuary; it was 1,571 kg (3,460 lb) and 7.2 m (24 ft). Several other records of aged beluga sturgeon exceed 5 m (16 ft) (Wood 1983). Likewise, kaluga (H. dauricus) in the Amur River have similarly long lengths and over 1000 kg (2200 lb) weights have been reported (Krykhtin and Svirskii 1997). Sturgeons also are probably the longest-lived of the fishes, some living well over 100 years and attaining sexual maturity after 20 years or more (Berg 1962). The late-maturing beluga has been reported to live for 118 years (Luna and Torres 2012).

Sturgeons are unique from most vertebrates in that the notochord is retained in adults. All vertebrates have a notochord—an internal, flexible, rod-shaped supporting structure—at some point in their life cycle. In higher vertebrates, such as the classes Chondrichthyes (cartilaginous fish), Mammalia (mammals), and Aves (birds), this notochord is typically present only in the embryonic stages, serving a structural role until the cartilaginous or bony vertebrae form and surround the dorsal nerve cord. In sturgeons, the notochord persists throughout life (Stemple 2005).

Sturgeons are primarily benthic feeders. With their projecting, wedge-shaped snouts, they stir up the soft bottom, and use the barbels to detect shells, crustaceans, and small fish, on which they feed. Having no teeth, they are unable to seize prey, though larger specimens can swallow very large prey items, including whole salmon (Zolotukhin and Kaplanova 2007).

Sturgeons are polyploid; some species have four, eight, or 16 sets of chromosomes (Anderson 2002).

Sturgeon range from subtropical to subarctic waters in North America and Eurasia. In North America, they range along the Atlantic coast from the Gulf of Mexico to Newfoundland, including the Great Lakes and the St. Lawrence, Missouri and Mississippi Rivers, as well as along the West Coast in major rivers from California to British Columbia and Sturgeon Lake, Alberta. They occur along the European Atlantic coast, including the Mediterranean basin, in the rivers that flow into the Black, Azov, and Caspian Seas (Danube, Dnepr, Volga and Don), the north-flowing rivers of Russia that feed the Arctic Ocean (Ob, Yenisei, Lena, Kolyma), in the rivers of Central Asia (Amu Darya and Syr Darya) and Lake Baikal. In the Pacific Ocean, they are found in the Amur River along the Russian-Chinese border, on Sakhalin island, and in the Yangtze and other rivers in northeast China (Berg 1962; Luna and Torres 2012).

Throughout this extensive range, almost all species are highly threatened or vulnerable to extinction due to a combination of habitat destruction, overfishing, and pollution (Luna and Torres 2012).

No species are known to naturally occur south of the equator, though attempts at sturgeon aquaculture are being made in Uruguay, South Africa, and other places (Burtzev, 1999).

Most species are at least partially anadromous, spawning in fresh water and feeding in nutrient-rich, brackish waters of estuaries or undergoing significant migrations along coastlines. However, some species have evolved purely freshwater existences, such as the lake sturgeon (Acipenser fulvescens) and the Baikal sturgeon (A. baerii baicalensis), or have been forced into them by anthropogenic or natural impoundment of their native rivers, as in the case of some subpopulations of white sturgeon (A. transmontanus) in the Columbia River (Duke et al. 1999) and Siberian sturgeon (A. baerii) in the Ob basin (Ruban 1999).

Acipenseriform fishes appeared in the fossil record approximately 200 million years ago, around the very end of the Triassic, making them among the most ancient of actinopterygian fishes. True sturgeons appear in the fossil record during the Upper Cretaceous. In that time, sturgeons have undergone remarkably little morphological change, earning them informal status as living fossils (Gardiner 1984; Krieger and Fuerst 2002).

Despite the existence of a fossil record, full classification and phylogeny of the sturgeon species has been difficult to determine, in part due to the high individual and ontogenic variation, including geographical clines in certain features, such as rostrum shape, number of scutes, and body length. A further confounding factor is the peculiar ability of sturgeons to produce reproductively viable hybrids, even between species assigned to different genera. The wide range of the acipenserids and their endangered status have made collection of systematic materials difficult. These factors have led researchers in the past to identify over 40 additional species that were rejected by later workers (Bemis et al. 1997). It is still unclear whether the species in the Acipenser and Huso genera are monophyletic (descended from one ancestor) or paraphyletic (descended from many ancestors)—although it is clear that the morphologically motivated division between these two genera is not supported by the genetic evidence. There is an ongoing effort to resolve the taxonomic confusion using a continuing synthesis of systematic data and molecular techniques (Fontana et al. 2001; Krieger and Fuerst 2002). 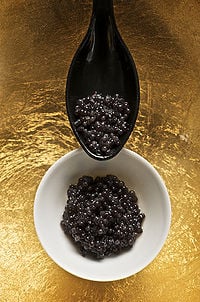 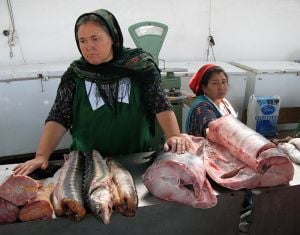 Woman selling sturgeon at a market in Türkmenbaşy, Turkmenistan

Globally, sturgeon fisheries are of great value, primarily as a source for caviar, but also for flesh.

Caviar is a luxury food, consisting of processed, salted, non-fertilized roe (ripe egg masses obtained from fish). Traditionally, the term caviar referred only to roe from wild sturgeon in the Caspian and Black Seas (Davidson and Jaine 2006. According to the United Nations' Food and Agriculture Organization, roe from any fish not belonging to the Acipenseriformes species (including Acipenseridae, or sturgeon stricto sensu, and Polyodontidae or paddlefish) are not caviar, but "substitutes of caviar" (Catarci 2004). This position is also adopted by the Convention on International Trade in Endangered Species of Wild Fauna and Flora (CITES 2002). However, depending on the country, the term caviar has also been applied to describe the roe of other fish, such as salmon, steelhead, trout, lumpfish, and whitefish. The rarest and costliest is from beluga sturgeon that swim in the Caspian Sea.

Before 1800, swim bladders of sturgeon (primarily Beluga sturgeon from Russia) were used as a source of isinglass, a form of collagen used historically for the clarification of beer, as a predecessor for gelatin, and to preserve parchments (Davidson 1999).

The Jewish law of kashrut, which only permits the consumption of fish with scales, forbids sturgeon, as they have ganoid scales instead of the permitted ctenoid and cycloid scales. While all Orthodox groups forbid the consumption of sturgeon, some conservative groups do allow it. The theological debate over its kosher status can be traced back to such 19th-century reformers as Aron Chorin, though its consumption was already common in European Jewish communities (Lupovich 2010). It remains a high-end staple of many Jewish delis and specialty shops.

With 85% of sturgeon species considered to be at risk of extinction, the IUCN declared in 2010 that sturgeons are the most threatened group on animals on the Red List of Threatened Species (IUCN 2010). 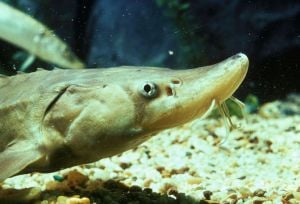