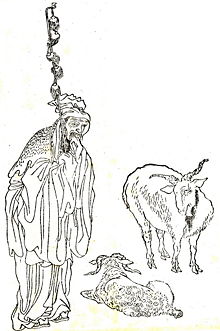 Su Wu (蘇武) (140 B.C.E. - 60 B.C.E. ) was a diplomat and statesman during China's Han Dynasty, and a famous figure in Chinese history remembered for his faithfulness to his mission and his empire. In 100 B.C.E., during a brief truce with the Xiongnu, Emperor Wu gave Su, then a Han scholar and the deputy commander of the Imperial Guards, credentials (often depicted as a staff with a banner on it) and sent him as an emissary to Xiongnu. His main responsibility was to return some Xiongnu emissaries to their home, and bring back some Han emissaries then being held captive by the Xiongnu. When they arrived at the headquarters of Chanyu Qiedihou, Su’s deputies, Zhang Sheng (張勝), and Chang Hui (常惠), hatched a plot to assassinate Chanyu Qiedihou's half-Chinese adviser Wei Lü (衛律) and kidnap the Chanyu's mother. The Chanyu learned about the plot, killed Yu and captured Zhang. Su, who was innocent, refused to surrender and cooperate with the Xiongnu, and was sent into exile as a shepherd in the wilderness. He remained there for nineteen years under the most difficult circumstances, steadfastly refusing to yield to the Xiongnu, until the Han and Xiongnu were again at peace and the Han Emperor negotiated his release.

Though told with little detail in historical records, the story of Su Wu’s steadfast loyalty to the Han was recounted in numerous songs, poems, and plays throughout Chinese history. In painting, he is most popularly depicted as a lonely shepherd tending his sheep, epitomizing his refusal to work for the enemy.

Not much is known about Su's early life or career. The first reference to him was the incident for which he is most well-known, a mission to Xiongnu. In 100 B.C.E., there was a short-lived détente between long-term adversaries, Han and Xiongnu. One year earlier, in 101 B.C.E., a new chanyu, Chanyu Qiedihou (且鞮侯), came into power in Xiongnu and expressed interest in peace with Han. As a goodwill gesture, he had allowed some Han diplomats who had been detained by Xiongnu to return to Han, along with gifts from the Chanyu.

In response, in 100 B.C.E., Emperor Wu commissioned Su, then a Han scholar and the deputy commander of the Imperial Guards, to serve as an ambassador to Xiongnu, and gave him credentials (often depicted as a staff with a banner on it). His deputy was fellow deputy commander Zhang Sheng (張勝), and the third in command was Chang Hui (常惠). Their main responsibility was to return some Xiongnu emissaries to their home, and bring back some Han emissaries then being held captive by the Xiongnu. However, once they arrived at the Xiongnu chanyu's headquarters, Chanyu Qiedihou was far more arrogant than expected, which angered Zhang. In response, Zhang plotted with two Xiongnu officials, the Prince of Gou (緱王) and Yu Chang (虞常), to assassinate Chanyu Qiedihou's half-Chinese adviser, Wei Lü (衛律) and kidnap the Chanyu's mother.

The Prince of Gou and Yu Chang began to carry out their plot while the Chanyu was away on a hunt, but someone alerted the Chanyu, who quickly returned, killed the Prince of Gou in battle, and captured Yu. Yu admitted to plotting with Zhang. Zhang, alarmed, informed Su, who had been unaware of Zhang's plot. Aware that the Chanyu was planning on forcing him to surrender to Xiongnu, Su tried to preserve his dignity by committing suicide with his sword. Wei, who had wanted Su to surrender and become an adviser to the Chanyu as well, quickly summoned doctors and barely saved Su's life. Chanyu Qiedihou, impressed with Su's heroism, also sent messengers to ensure Su's recovery, while putting Zhang and Chang under arrest.

After Su recovered, Chanyu Qiedihou decided to publicly execute Yu as an example, and to force the entire Han mission to surrender. Zhang became apprehensive and surrendered. Su, however, was not shaken in his resolve, even when Wei put his sword against Su's neck, and tried also to persuade him that, as the Chanyu's adviser, he would be greatly honored. Su rebuked him for his faithlessness to Han and refused to surrender.

Unable to force Su to surrender, Chanyu Qiedihou decided to try to torture him by starvation, and put him in a cellar without food and drink. For several days, Su survived by consuming wool from his coat and the snow that fell into the cellar. The Chanyu was surprised to find him alive and well, and thought that the gods were protecting him. The Chanyu then exiled him to Lake Baikal and ordered him to tend a flock of rams, telling him that he would be allowed to go home when the rams produced milk. It is conjectured, with some evidence based on correspondence later between Su and his friend, Li Ling (李陵), that the chanyu gave Su a Xiongnu wife, and she bore him children.

During exile, Su sometimes lacked food, as the food supplies coming from the Xiongnu headquarters did not arrive steadily. He often had to resort to eating grass roots and wild rodents. Regardless of these difficulties, however, Su always held onto the imperial staff (節) given to all imperial messengers, and used it as his shepherd's rod, until the decorative hairs on the staff eventually all fell off.

Twice, during Su’s exile, the Chanyu sent his friend Li Ling, a Han general who had surrendered to Xiongnu after being defeated on the battlefield in 99 B.C.E., to visit him. The first time, Li informed Su that his two brothers had both been accused of crimes and committed suicide; that his mother had died; and that his wife had remarried. He tried to convince Su to surrender, but Su refused. On the second occasion, Li informed him of Emperor Wu's passing, and Su was so despondent that, in mourning, he vomited blood.

Ling Li (李陵) (d. 119 B.C.E.) was a Han Chinese general who participated in the Han conquests from 100-80 B.C.E. and served under the Emperor Wu of Han (Han Wudi). In 99 B.C.E., Li Ling and Li Guangli (李廣利), two military officers, led a campaign against the Xiongnu (匈奴) in the north. They were defeated and taken captive. Emperor Han Wudi attributed the defeat to Li Ling, and all the officials in the government condemned Li Ling for his defeat.

Sima Qian, a senior imperial official who respected him, was the only person to defend Li Ling. The Emperor was offended and construed Sima’s defense of Li Ling as an attack on his own brother-in-law, who had also fought against the Xiongnu without much success. Sima was sentenced to death, but managed to have the sentence for his "crime" commuted to castration, and suffered three years in prison.

In 86 B.C.E., the Xiongnu and Han made peace, and the new Han emperor asked for Su Wu's return. In 81 B.C.E., Han was again in a détente with Xiongnu, and Han ambassadors sent to the chanyu’s court inquired about Su's fate. The Xiongnu government claimed that Su had long since died. However, Su's old assistant Zhang secretly informed the Han ambassadors of Su's exile. At is suggestion, the ambassadors, informed the chanyu, Huyandi (壺衍鞮), that Emperor Zhao had killed a migratory bird while hunting, and that a letter from Su, seeking help, had been found tied to the bird's foot. Surprised, Chanyu Huyandi admitted that Su was in fact still alive, and recalled him and allowed him to go home. (Later re-tellings have Su Wu actually fastening the message to the foot of a goose.) In all, he was in exile for nineteen years.

Once Su returned to Han, he was given the position of Director of Colonization (典屬國), a high-ranking official post. He remained in that post at least until the early years of Emperor Xuan's reign, in the late 70s B.C.E. In 51 B.C.E., when Emperor Xuan, in gratitude to eleven key officials who served him well, had their portraits painted onto the main gallery of the main imperial palace, Su was one of the eleven.

Su was often regarded as the epitome of faithful service in the face of great difficulties and trials. His story was often invoked when acts of great faith or courage were performed by officials. His story, though told with little detail in historical records, often became the subject of drama, poetry, and songs throughout Chinese history. Many people regard him as a second Zhang Qian who, caught in a similar situation, refused to surrender and managed to escape back to the Han. In painting he is most popularly depicted as a lonely shepherd tending his sheep, epitomizing his refusal to work for the enemy. Li Ling never returned to China, and their parting is the subject of several famous paintings.[1]

A traditional Chinese melody, "Su Wu Mu Yang" (蘇武牧羊), is based on the story of Su Wu herding sheep. It is generally played on a Chinese flute. Xilutang Qintong (1549), contains the only surviving version of a qin melody about the Su Wu, under the alternate title Su Wu Thinks of his Lord. Another melody in Xilutang Qintong called Li Ling Si Han is closely related to the flute melody.

Retrieved from https://www.newworldencyclopedia.org/p/index.php?title=Su_Wu&oldid=982023
Categories:
Hidden category:
This page was last edited on 29 May 2014, at 16:27.
Content is available under Creative Commons Attribution/Share-Alike License; additional terms may apply. See Terms of Use for details.