In astronomy, equinox can have two meanings:

An equinox in astronomy is the moment in time (not a whole day) when the center of the Sun can be observed to be directly above the Earth's equator, occurring around March 20 and September 23 each year.

More technically, at an equinox, the Sun is at one of two opposite points on the celestial sphere where the celestial equator (that is, declination 0) and ecliptic intersect. These points of intersection are called equinoctial points—the vernal point and the autumnal point. By extension, the term equinox may be used to denote an equinoctial point.

Timing of each equinox and solstice

There is either an equinox (autumn and spring) or a solstice (summer and winter) on approximately the 21st day of the last month of every quarter of the calendar year. On a day which has an equinox, the centre of the Sun will spend a nearly equal amount of time above and below the horizon at every location on Earth and night and day will be of nearly the same length. The word equinox derives from the Latin words aequus (equal) and nox (night). In reality, the day is longer than the night at an equinox. Commonly, the day is defined as the period that sunlight reaches the ground in the absence of local obstacles. From Earth, the Sun appears as a disc and not a single point of light; so, when the centre of the Sun is below the horizon, the upper edge is visible. Furthermore, the atmosphere refracts light; so, even when the upper limb of the Sun is below the horizon, its rays reach over the horizon to the ground. In sunrise/sunset tables, the assumed semidiameter (apparent radius) of the sun is 16 minutes of arc and the atmospheric refraction is assumed to be 34 minutes of arc. Their combination means that when the upper limb of Sun is on the visible horizon its center is 50 minutes of arc below the geometric horizon, which is the intersection with the celestial sphere of a horizontal plane through the eye of the observer. These effects together make the day about 14 minutes longer than the night at the equator, and longer still at sites toward the poles. The real equality of day and night only happens at places far enough from the equator to have at least a seasonal difference in day length of 7 minutes, and occurs a few days towards the winter side of each equinox. 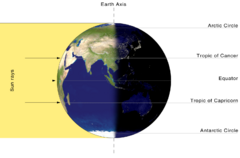 Illumination of the Earth by the Sun on the day of equinox, (ignoring twilight). 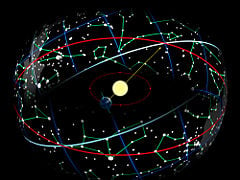 The Earth in its orbit around the Sun causes the Sun to appear on the celestial sphere moving over the ecliptic (red), which is tilted on the equator (blue).

Diagram of the Earth's seasons as seen from the north. Far right: December solstice

Diagram of the Earth's seasons as seen from the south. Far left: June solstice 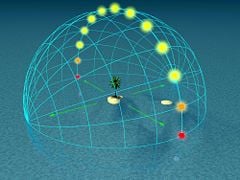 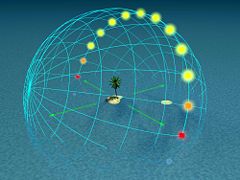 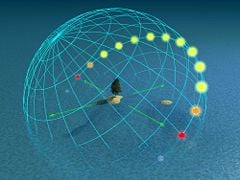 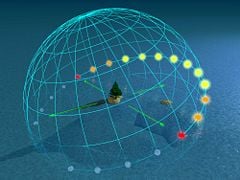 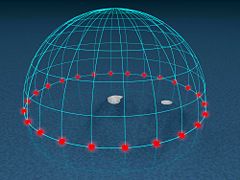 Heliocentric view of the seasons

The Earth's seasons are caused by the rotation axis of the Earth not being perpendicular to its orbital plane. The Earth's axis is tilted at an angle of approximately 23.44° from the orbital plane. This tilt is called the axial tilt. As a consequence, for half a year (from around 20 March to around 22 September) the northern hemisphere tips toward the Sun, with the maximum around 21 June, while for the other half year the southern hemisphere has this honor, with the maximum around 21 December. The two instances when the Sun is directly overhead at the equator are the equinoxes. Also at that moment both the north pole and south pole of the Earth are just on the terminator, and day and night are divided equally between the hemispheres.

The table above gives the dates and times of equinoxes and solstices over several years. A few remarks can be made about the equinoxes:

Geocentric view of the seasons

The explanation given in the previous section would be useful for an observer in outer space. As seen by an observer on Earth, it may appear to the casual observer that the Sun revolves around the Earth once a year. As such, in the half year centered around June it rises and sets more towards the north, which means longer days and shorter nights for the northern hemisphere and shorter days and longer nights for the southern hemisphere. In the half year centered around December the Sun rises and sets more towards the south, and the day and night durations are reversed.

Also, on the equinox day, the Sun rises, for every place on Earth (except at the poles), at 6:00 in the morning and sets at 18:00 in the evening local time. But these times are not exact for several reasons.

Day arcs of the Sun

Some of the above statements can be made clearer when picturing the day arc: the path the Sun tracks along the celestial dome in its diurnal movement. The pictures show this for every hour on equinox day. In addition, also some "ghost" suns are indicated below the horizon, up to 18° down. The Sun in this area still causes twilight. The pictures can be used for both the northern and the southern hemisphere. The observer is supposed to sit near the tree on the island in the middle of the ocean. The green arrows give the cardinal directions.

The following special cases are depicted.

The vernal point (vernal equinox)—the one the Sun passes in March on its way from south to north—is used as the origin of some celestial coordinate systems:

Because of the precession of the Earth's axis, the position of the vernal point changes over time and as a consequence both the equatorial and the ecliptic coordinate systems change over time. Therefore, when specifying celestial coordinates for an object, one have to specify at what time the vernal point (and also the celestial equatorial) are taken. That reference time is also called equinox.

The autumnal equinox is at ecliptic longitude 180° and at right ascension 12h.

For Western tropical astrology, the same thing holds true; the vernal equinox is the first point (such as, the start) of the sign of Aries. In this system, it is of no significance that the fixed stars and equinox shift compared to each other due to the precession of the equinoxes.

In the list below the terms March and September equinoxes are used when the celebration is fixed in time, while the terms spring and autumn equinoxes refer to those which are different in the two hemispheres.