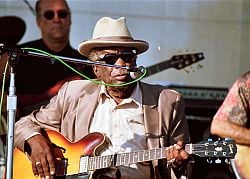 John Lee Hooker (August 22, 1917[1] – June 21, 2001) was an influential American post-war blues singer, guitarist, and songwriter. Musically, Hooker was influenced by the guitar style of his stepfather, a local blues guitarist, who played a droning, one-chord type of blues distinct from the typical Delta blues of the time.[2]

Hooker performed in a half-spoken style that, together with his deep voice and plaintiff singing, became his trademark. Rhythmically, his music was primitive and relatively free-form, making it difficult for other musicians to play with him. Thus, during most of his career, he remained a solo act. His recording career began in Detroit, where he made his home for much of his adult life. His best known songs include "Boogie Chillen," "In the Mood," and "Boom Boom."

More than any other well known urban bluesman, Hooker's music maintained its rural roots. It also strongly influenced the rock scene of the 1960s and 1970s and left a lasting imprint on both blues an rock musicians. Hooker was born in Coahoma County near Clarksdale, Mississippi, the youngest of the 11 children of William Hooker, a sharecropper and Baptist preacher, and Minnie Ramsey. He and his numerous siblings were only permitted to listen to religious songs, and thus young Hooker's earliest musical exposure was limited to the spirituals sung in church and at home. In 1921 Hooker's parents separated and the next year his mother married William Moore, a blues singer who provided his first introduction to the guitar (and whom he would later credit for his distinctive playing style).

At age 15 Hooker ran away from home; he would never see his mother and stepfather again.[3] Throughout the 1930s, Hooker lived in Memphis, where he worked on Beale Street and occasionally performed at house parties. He worked in factories in various cities during World War II as he drifted around until he found himself in Detroit in 1948 working in a car factory. In Detroit, he frequented the blues venues and saloons on Hastings Street, the heart of black entertainment on Detroit's east side. Here guitar players were scarce in a city noted for its piano players. His quickly growing popularity as a performer in Detroit's clubs made necessary a louder instrument than his crude guitar, so he bought his first electric guitar.[4]

In Detroit, Hook was "discovered" by Elmer Barbee, a record store owner who introduced him to producer Bernard Besman of Sensation Records. Besman in turn leased some of Hooker's recordings to the Bihari brothers' Modern Records, which would later become Chess Records. Hooker's first hit was an uptempo foot stomper, "Boogie Chillen," which would become a number one jukebox hit and a million seller. The slower, more sensuous "I'm In The Mood" sold even better. Other early hits included "Crawling Kingsnake" and "Hobo Blues."

Despite being illiterate, Hooker was a prolific lyricist. In addition to adapting the occasionally traditional blues lyric, he freely invented many of his songs from scratch. Recording studios in the 1950s rarely paid black musicians more than a pittance, so Hooker would record with various studios, coming up with new songs or variations on his songs for each one. These songs were recorded under obvious pseudonyms such as "John Lee Booker," "Johnny Hooker," or "John Cooker."[5]

Although he was an overnight sensation in the rhythm and blues market, Hooker did not reap the full rewards of his success. The Biharis often purchased or claimed co-authorship of songs that appeared on their labels, thus securing songwriting royalties for themselves. Thus some of the substantial residual income from Hooker's songs did not belong to him.

Hooker would later release more than one hundred songs on Vee Jay Records during the 1950s and 1960s, giving his career another surge.

Hooker developed a wider following during the folk and blues revival of the 1960s. He began playing in folk venues, and also had a major impact on the culture of 1960s and 1970s rock. The rock-blues band Canned Heat deeply admired Hooker and used his trademark "Boogie Chillum" rhythm and chord progression to good effect in some of its songs, as did several later bands, especially ZZ Top. The smash hit "Spirit in the Sky" by Norman Greenbaum, which sold nearly three million records in 1970, also used Hooker's "Boogie Chillum" riff in its introduction and instrumental interlude. Van Morrison, recording with the group "Them," covered a Hooker hit, "Baby Please Don't Go," which was originally recorded by Big Bill Broonzy. The rock hit "Money, That's What I Want," originally by Barry Strong and later covered by The Beatles, appears to be based on Hooker's earlier "I need some money" which begins with almost identical lyrics: "The best things in life are free/But you can give it to the birds an' bees/I need some money." White blues bands often covered his songs and copied his more memorable riffs, both vocal and guitar.

Hooker also appeared and sang in the 1980 movie The Blues Brothers. He was a direct influence in the look of Jake and Elwood Blues, who adopted Hooker's trademark sunglasses, dark suit, and fedora hat.

In 1989 Hooker joined with a number of musicians, including Keith Richards and Carlos Santana to record "The Healer," which won a Grammy award. Hooker recorded several songs with Van Morrison, including "Never Get Out of These Blues Alive," "The Healing Game," and "I Cover the Waterfront." He also appeared on stage with Van Morrison several times, some of which was released on the live album A Night in San Francisco. He was much admired and honored by the many younger blues players who were influenced by his music.

Hooker recorded over one hundred albums. He lived the last years of his life in the San Francisco Bay Area, where, in 1997, he opened a nightclub called "John Lee Hooker's Boom Boom Room." He fell ill just before a tour of Europe in 2001 and died soon afterwards at the age of 83. He was survived by eight children, 19 grandchildren, numerous great-grandchildren, and a nephew.

Hooker's guitar playing is closely aligned with piano boogie-woogie. He would often play the walking bass pattern with his thumb, stopping to emphasize the end of a line with a series of trills, done by rapid hammer-ons and pull-offs. He sometimes used open tunings, as did his Mississippi Delta predecessors, but more often used a traditional guitar tuning. He was a master in bending the strings of his electric guitar just far enough to produce the blue notes he needed for emotional effect. "I don't play a lot of fancy guitar," he told the Atlanta Daily News in 1992. "I don't want to play it. The kind of guitar I want to play is mean, mean licks."

Hooker rarely played on a standard beat, but changed tempo and omitted bars to fit the needs of the song. Also, his sense of chording was more modal than traditional. This made it nearly impossible to add backing tracks, and even live musicians often found it difficult to follow Hooker's lead. As a result, Hooker's early producer, Bernie Besman, often recorded him alone with his guitar, stomping along with the music on a wooden palette.[6] This effect become one of Hooker's trademarks, giving a sense of primitive loneliness to his recordings that matches perfectly with many of his songs.

Hooker's deep, plaintiff voice was unmatched in its dark tonalities. His vocal phrasing was less closely tied to specific bars than most blues singers. This casual, rambling style had been gradually diminishing with the onset of electric blues bands from Chicago, but even when not playing solo, Hooker retained it. Although he lived in Detroit during most his career, he is not associated with the Chicago-style blues prevalent in large northern cities, as much as he is with the southern blues styles, known as "delta blues," although his driving beat and powerfully recorded toe-tapping gave him a definite urban feel. His use of an electric guitar tied together the delta blues with the emerging post-war electric blues.

Songs that most epitomize his early sound are "Boogie Chillen," about a young man coming to town and finding the Detroit boogie clubs; "Baby Please Don't Go," a more typical blues song, summed up by its title; "Boom Boom!" a similar tune portraying the beginning of a love affair rather than its end; and "Tupelo," a stunningly sad song about the flooding of Tupelo, Mississippi. Hooker was a master of the slow blues typified by "Tupelo," "I'm in the Mood," and many others.

Hooker maintained a solo career for many years, popular with blues and folk music fans of the early 1960s and thus crossed over to white audiences. As he got older, he added more people to his band, changing his live show from simply himself with his guitar to a large band, with Hooker singing.

His songs have been covered by The Doors, Led Zeppelin, The Yardbirds, The Animals, R.L. Burnside, The Jon Spencer Blues Explosion and many others. Contemporary blues greats who have paid tribute to him include Eric Clapton, Bonnie Raitt, Robert Cray, Ry Cooder and Carlos Santana. Indeed, there is hardly an exponent of the blues alive today that does not acknowledge a debt to Hooker.