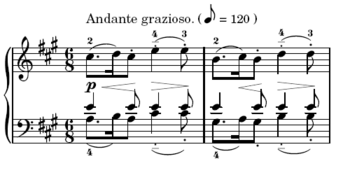 The first two measures of Mozart's Sonata XI, which indicates the tempo as "Andante grazioso" and a modern editor's metronome marking: "♪ = 120".

In musical terminology, tempo (Italian for "time," from Latin Tempus) is the speed or pace of a given piece. It is a crucial element in a musical performance as it affects the phrasing and articulation of a given piece, which in turn affects the resultant mood, expression, or atmosphere.

The plural of tempo in Italian is tempi. Some writers employ this plural when writing in English. Others use the native English plural tempos. Standard dictionaries reflect both usages.

As tempo is identified as the basic pace or movement of the music, it becomes a significant component of the piece. The tempo is created to co-exist in a cooperative relationship with other musical entities. Within a piece of music, no entity is isolated; each works within a mutually fulfilling partnership.

Conductors of orchestras often refer to tactus (time/tempo) and ictus (beat/pulse) when addressing the presentation of a musical composition. French composer Jean-Baptiste Lully (1632-1687) is generally considered the first musician to take on what would become the role of the modern conductor when he would stand apart from an ensemble and beat time (ictus/tactus) with a wooden staff. 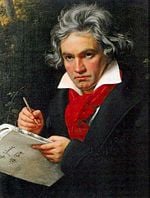 Beethoven was the first major composer to use a mertronome to indicate tempo in his musical scores.

Though Johann Nepomuk Mälzel is considered to be the inventor of the metronome, he copied several mechanical ideas of Dietrich Nikolaus Winkel of Amsterdam, who had produced a regulating, time-keeping device in 1812. Mälzel received a patent for his device in 1816. Ludwig van Beethoven was the first important composer to use the metronome to indicate specific tempi in his music. Prior to that time tempo indications had been fairly general and non-specific and were based on Italian terms, such as Allegro, Andante, Adaigo, and so on.

Mathematical tempo markings of this kind became increasingly popular during the first half of the nineteenth century, after the metronome had been invented by Mälzel. However, early metronomes were somewhat inconsistent, and many scholars still consider Beethoven's metronome markings, in particular, to be notoriously unreliable.

As the nineteenth century progressed, composers would indicate the tempo of a given piece by designating "MM" (for Mälzel’s Metronome) at the start of a piece of music. In modern music, this is usually indicated in "beats per minute" (BPM). This means that a particular note value (for example, a quarter note or crotchet) is specified as the beat, and the marking indicates that a certain number of these beats must be played per minute. The greater the tempo, the larger the number of beats that must be played in a minute is and, therefore, the faster a piece must be played. With the advent of modern electronics, BPM became an extremely precise measure. MIDI files and other types of sequencing software use the BPM system to denote tempo.

As an alternative to metronome markings, some twentieth century composers (such as Béla Bartók and John Cage) would give the total execution time of a piece, from which the proper tempo can be roughly derived.

Tempo is as crucial in contemporary music as it is in classical. In electronic dance music, accurate knowledge of a tune's BPM is important to DJs for the purposes of beatmatching. Whether a music piece has a mathematical time indication or not, in classical music it is customary to describe the tempo of a piece by one or more words. Most of these words are Italian, a result of the fact that many of the most important composers of the seventeenth century were Italian, and this period was when tempo indications were used extensively for the first time.

Did you know?
Before the invention of the metronome, words were the only way to describe the tempo of a musical composition

Before the invention of the metronome, words were the only way to describe the tempo of a musical composition. Yet, after the metronome's invention, these words continued to be used, often additionally indicating the mood of the piece, thus blurring the traditional distinction between tempo and mood indicators. For example, presto and allegro both indicate a speedy execution (presto being faster), but allegro also connotes joy (from its original meaning in Italian). Presto, on the other hand, indicates speed as such (while possibly connoting virtuosity, a connotation it did not acquire until the late eighteenth century).

Additional Italian words also indicate tempo and mood. For example, the "agitato" in the Allegro agitato of the last movement of George Gershwin's piano concerto in F has both a tempo indication (undoubtedly faster than a usual Allegro) and a mood indication ("agitated").

In some cases (quite often up to the end of the Baroque period), conventions governing musical composition were so strong that no tempo had to be indicated. For example, the first movement of Bach's Brandenburg Concerto No. 3 has no tempo or mood indication whatsoever. To provide movement names, publishers of recordings resort to ad hoc measures, such as marking the Brandenburg movement "Allegro," "(Without indication)," and so on.

In the Renaissance period, most music was understood to flow at a tempo defined by the tactus, roughly the rate of the human heartbeat. Which note value corresponded to the tactus was indicated by the mensural time signature.

Often a particular musical form or genre implies its own tempo, thus no further explanation is placed in the score. As a result, musicians expect a minuet to be performed at a fairly stately tempo, slower than a Viennese waltz; a Perpetuum Mobile to be quite fast, and so on. The association of tempo with genre means that genres can be used to imply tempos; thus Ludwig van Beethoven wrote "In tempo d'un Menuetto" over the first movement of his Piano Sonata Op. 54, although that movement is not a minuet. Popular music charts use terms such as "bossa nova," "ballad," and "Latin rock," in much the same way.

It is important to note, when interpreting these terms, that tempos have changed over time, and there can be variances from location to location as well. In addition, the ordering of terms has changed. Thus, a modern Largo is slower than an Adagio, however in the Baroque period it was somewhat faster.

Generally, composers (or music publishers) will name movements of compositions after their tempo (and/or mood) marking. The second movement of Samuel Barber's first String Quartet is an "Adagio." Such movements may start to lead a life of their own, and become known with the tempo/mood marker name. The string orchestra version of the second movement of Barber's first string quartet became known as Adagio for Strings. A similar example is perhaps Gustav Mahler's most famous work—the Adagietto from his Symphony No. 5. Another is Mozart's Alla Turca (here indicating the Janissary music type of mood of the final movement of Mozart's 11th Piano Sonata, K. 331)

At times the link between a musical composition with a "tempo" term and a separate movement of a composition is less clear. For instance, Albinoni's Adagio, is a twentieth century creative "reconstruction" based on an incomplete manuscript.

Some composers chose to include tempo indicators in the name of a separate composition, as is the case with Bartók in Allegro barbaro ("barbaric Allegro"), a single movement composition.

From fastest to slowest, the common tempo markings are:

Mood markings with a tempo connotation

Some markings that primarily mark a mood (or character) also have a tempo connotation:

Composers may use expressive marks to adjust the tempo:

While the base tempo indication (such as "Allegro") appears in large type above the staff, these adjustments typically appear below the staff or (in the case of keyboard instrument) in the middle of the grand staff.

They generally designate a gradual change in tempo; for immediate tempo shifts, composers normally just provide the designation for the new tempo. (Note, however, that when Più Mosso or Meno Mosso appears in large type above the staff, it functions as a new tempo, and thus implies an immediate change.) Several terms control how large and how gradual this change is:

After a tempo change, a composer may return to a previous tempo in two different ways:

These terms also indicate an immediate, not a gradual, tempo change. Although they are Italian, composers typically use them even if they have written their initial tempo marking in some other language.

Tempo markings in other languages

Although Italian has been the prevalent language for tempo markings throughout most of classical music history, many composers have written tempo indications in their own language.

One of the first German composers to use tempo markings in his native language was Ludwig van Beethoven. The one using the most elaborate combined tempo and mood markings was probably Gustav Mahler. For example, the second movement of his Symphony No. 9 is marked Im tempo eines gemächlichen Ländlers, etwas täppisch und sehr derb, indicating a slowish folk dance-like movement, with some awkwardness and vulgarity in the execution. Mahler would also sometimes combine German tempo markings with traditional Italian markings, as in the first movement of his sixth symphony, marked Allegro energico, ma non troppo. Heftig, aber markig.

English indications, for example quickly, have also been used, by Benjamin Britten, amongst many others. In jazz and popular music charts, terms like "fast," "laid back," "steady rock," "medium," "medium-up," "ballad," and similar style indications may appear.

When performers unintentionally speed up, they are said to rush. The similar term for unintentionally slowing down is drag. Unless practiced by an experienced performer who "knows what he or she is doing," these actions are undesirable; dragging can often indicate a hesitance in the performer due to lack of practice; rushing can likewise destroy the pulse of the music. Because of their negative connotation, neither rush nor drag (nor their equivalents in other languages) are often used as tempo indications in scores, Mahler being a notable exception: As part of a tempo indication he used schleppend ("dragging") in the first movement of his Symphony No. 1, for example.

The impact of tempo

As the basic speed or pace of a piece of music, the tempo can be any variation between fast and slow speeds which in turn can affect the expressive aspect of the music. A fast tempo may mean great energy and excitement; a slow tempo may create feelings of calmness and solemnity. The impact of the tempo on musical compositions clearly affects the mood of the piece. Tempo indications were a way for the composer to clearly qualify the speed and affect emotion of their compositions.