His mother was a talented, amateur singer, and this undoubtedly contributed to his great affinity for vocal composition. His song cycles, large-scale choral works and operas are considered among the finest examples of vocal writing in the twentieth century. Though he lived though the upheaval of musical style brought on by the atonalists of the Second Viennese School, his style remained deeply rooted in the tonal idiom of late Romanticism and very much of the same vernacular of Gustav Mahler, Dmitri Shostakovich and Samuel Barber.

Britten once wrote: “It is cruel, you know, that music should be so beautiful. It has the beauty of loneliness and of pain: of strength and freedom. The beauty of disappointment and never-satisfied love. The cruel beauty of nature, and everlasting beauty of monotony.” This statement is surely one that is born out of the spirit of the Romantic era of the late nineteenth century.

Britten was born in Lowestoft in Suffolk, the son of a dentist and a talented amateur musician. His birthday, November 22, is the feast-day of Saint Cecilia, the patron saint of music, and he showed musical gifts very early in life. He began composing prolifically as a child, and was educated at Gresham's School. In 1927, he began private lessons with Frank Bridge. He also studied, less happily, at the Royal College of Music under John Ireland and with some input from Ralph Vaughan Williams. Although ultimately held back by his parents (at the suggestion of College staff), Britten had also intended to study with Alban Berg in Vienna. His first compositions to attract wide attention were the Sinfonietta (Op.1) and a set of choral variations A Boy was Born, written in 1934 for the BBC Singers. The following year he met W. H. Auden with whom he collaborated on the song-cycle Our Hunting Fathers, radical both in politics and musical treatment, and other works. Of more lasting importance was his meeting in 1936 with the tenor Peter Pears, who was to become his musical collaborator and inspiration as well as his partner.

In early 1939, the two of them followed Auden to America. There Britten composed the operetta Paul Bunyan, his first opera (to a libretto by Auden), as well as the first of many song cycles for Pears; the period was otherwise remarkable for a number of orchestral works, including Variations on a Theme of Frank Bridge (for string orchestra), the Violin Concerto, and Sinfonia da Requiem (for full orchestra).

Britten and Pears returned to England in 1942, Britten completing the choral works Hymn to St. Cecilia (his last collaboration with Auden) and A Ceremony of Carols during the long sea voyage. He had already begun work on his opera Peter Grimes, and its premiere at Sadler's Wells in 1945 was his greatest success so far. However, Britten was encountering opposition from sectors of the English musical establishment and gradually withdrew from the London scene, founding the English Opera Group in 1947 and the Aldeburgh Festival the following year, partly (though not solely) to perform his own works.

Grimes marked the start of a series of English operas, of which Billy Budd (1951) and The Turn of the Screw (1954) were particularly admired. These operas share common themes, with that of the 'outsider' particularly prevalent. Most feature such a character, excluded or misunderstood by society; often this is the protagonist, such as Peter Grimes and Owen Wingrave in their eponymous operas. An increasingly important influence was the music of the East, an interest fostered by a tour with Pears in 1957, when Britten was much struck by the music of the Balinese gamelan and by Japanese Noh plays. The fruits of this tour include the ballet The Prince of the Pagodas (1957) and the series of semi-operatic "Parables for Church Performance": Curlew River (1964), The Burning Fiery Furnace (1966) and The Prodigal Son (1968). The greatest success of Britten's career was, however, the musically more conventional War Requiem, written for the opening of the rebuilt Coventry Cathedral in 1962.

Britten developed close friendships with Dmitri Shostakovich and Mstislav Rostropovich in the 1960s, composing his Cello Suites for the latter and conducting the first Western performance of the former's Symphony No. 14; Shostakovich dedicated the score to Britten and often spoke very highly of his music. Britten himself had previously dedicated 'The Prodigal Son' (the third and last of the 'Church Parables') to Shostakovich.

In the last decade or so of his life, Britten suffered from increasing ill-health and his late works became progressively more sparse in texture. They include the opera Death in Venice (1973), the Suite on English Folk Tunes "A Time There Was" and Third String Quartet (1975), which drew on material from Death in Venice, as well as the dramatic cantata Phaedra (1976), written for Janet Baker. Having previously refused a knighthood, Britten accepted a life peerage on July 2, 1976 as Baron Britten, of Aldeburgh in the County of Suffolk. A few months later he died of congestive heart failure at his house in Aldeburgh. He is buried in the churchyard there.

One of Britten's best known works is The Young Person's Guide to the Orchestra (1946), which was composed to accompany Instruments of the Orchestra, an educational film produced by the British government, and narrated and conducted by Malcolm Sargent. It has the subtitle Variations and Fugue on a Theme of Purcell, and takes a melody from Henry Purcell's Abdelazar as its central theme. Britten gives individual variations to each of the sections of the orchestra, starting with the woodwind, then the string instruments, the brass instruments and finally the percussion. Britten then brings the whole orchestra together again in a fugue before restating the theme to close the work. The original film's spoken commentary is often omitted in concert performances and recordings.

Britten was also an accomplished pianist, and sometimes performed at the piano in chamber music or accompanying lieder. However, apart from the Piano Concerto (1938) and the Diversions for piano and orchestra (written for Paul Wittgenstein in 1940), he wrote very little music for the instrument, and in a 1963 interview for the BBC said that he thought of it as "a background instrument."

His work as a conductor included not only his own music but also that of many other composers, notably Mozart, Elgar, and Percy Grainger.

One of Britten's solo works that has an indisputably central place in the repertoire of its instrument is his Nocturnal after John Dowland for guitar (1964). This work is typically spare in his late style, and shows the depth of his life-long admiration for Elizabethan lute songs. The theme of the work, John Dowland's Come, Heavy Sleep, emerges in complete form at the close of eight variations, each variation based on some feature, frequently transient or ornamental, of the song or its lute accompaniment. 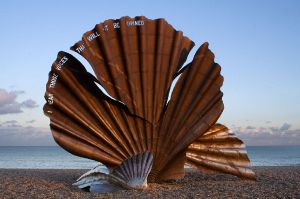 The Scallop by Maggi Hambling is a sculpture dedicated to Benjamin Britten on the beach at Aldeburgh. The edge of the shell is pierced with the words "I hear those voices that will not be drowned" from Peter Grimes.

Britten's status as one of the greatest English composers of the twentieth century is now secure among professional critics. In the 1930s he made a conscious effort to set himself apart from the English musical mainstream, which he regarded as complacent, insular and amateurish. Many critics of the time, in return, distrusted his facility, cosmopolitanism and admiration for composers, such as Mahler, Berg, and Stravinsky, not considered appropriate models for a young English musician. Even today, criticism of his music is apt to become entangled with consideration of his personality, politics and sexuality. The publication of Humphrey Carpenter's biography in 1992, with its revelations of Britten's often fraught social, professional and sexual relationships, has ensured that he will remain a controversial figure. For many musicians, however, his flawless technique, broad musical and human sympathies and ability to treat the most traditional of musical forms with freshness and originality places him near the head of composers of his generation.

Britten's Children is a 2006 work by John Bridcut that describes Britten’s love for a series of adolescent boys throughout his life. Bridcut’s book followed his television documentary Britten’s Children shown on BBC2 in June 2004.

Cantus in Memory of Benjamin Britten

Britten is the subject of a piece by the Estonian composer Arvo Pärt titled Cantus In Memoriam Benjamin Britten. Pärt wrote the work as a personal tribute to the composer whose music he came to admire only late in his life.