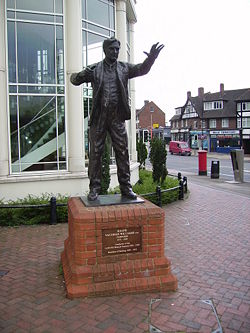 A statue of Ralph Vaughan Williams

Ralph Vaughan Williams (October 12, 1872 – August 26, 1958) was an influential English composer. He was a student at the Royal College of Music and Trinity College, Cambridge and served as a lieutenant in World War I. He wrote nine symphonies between 1910 and 1958, as well as numerous other works, including chamber music, opera, choral music and film scores. He was also a collector of British folk music and served as president of the English Folk Dance and Song Society (EFDSS). The society's Vaughan Williams Memorial Library is named after him.

He was a musical patriot who believed strongly in the importance of music as an expression of national pride. He wrote, "If the roots of your art are firmly planted in your own soil and that soil has anything individually to give you, you may still gain the whole world and not lose your own soul."

Like Hungarian composers Bela Bartok and Zoltan Kolday, who pioneered the field of ethnomusicology, Vaughan Williams believed that the preservation of the musical heritage of his native England was an important aspect of his work as a composer. By collecting English folk music from the countryside, in much the same way as Bartok and Kodaly, and incorporating folk elements into his compositions, Vaughan-Williams demonstrated a sincere commitment to the preservation of his country's musical roots. Many of Vaughan-Williams' works integrate the melodic and harmonic properties of traditional folk music with "classical" structure and form. He would construct original themes and harmonic progressions that were predicated on the intervallic and harmonic properties of actual folk music.

He also possessed a reverence for sacred music and wrote several hymns that appear in the English Hymnbook, of which he was made editor in 1904. He believed that modern church music should embody the same compositional integrity of art music once commenting, "Why should we not enter into our inheritance in the church as well as the concert room."

Vaughan Williams was born in Down Ampney, Gloucestershire, where his father, the Rev. Arthur Vaughan Williams, was rector. Following his father's death in 1875 he was taken by his mother, Margaret Susan Wedgwood (1843–1937), the great grand daughter of the potter Josiah Wedgwood, to live with her family at Leith Hill Place, the Wedgwood family home in the North Downs. He was also related to the Darwins, Charles Darwin being a great-uncle. Ralph (pronounced "Rafe"[1]) was therefore born into the privileged intellectual upper middle class, but never took it for granted and worked tirelessly all his life for the democratic and egalitarian ideals he believed in.

As a student he had studied piano, "which I never could play, and the violin, which was my musical salvation."

After Charterhouse School he attended the Royal College of Music (RCM) under Charles Villiers Stanford. He read history and music at Trinity College, Cambridge where his friends and contemporaries included the philosophers G. E. Moore and Bertrand Russell. He then returned to the RCM and studied composition with Hubert Parry, who became a close friend. His composing developed slowly and it was not until he was 30 that the song "Linden Lea" became his first publication. He mixed composition with conducting, lecturing and editing other music, notably that of Henry Purcell and the English Hymnal. He had further lessons with Max Bruch in Berlin in 1897 and later a big step forward in his orchestral style occurred when he studied in Paris with Maurice Ravel.

In 1904 he discovered English folk songs, which were fast becoming extinct owing to the increase of literacy and printed music in rural areas. He collected many himself and edited them. He also incorporated some into his music, being fascinated by the beauty of the music and its anonymous history in the working lives of ordinary people.

In 1905 Vaughan Williams conducted the first concert of the newly founded Leith Hill Music Festival at Dorking, a conductorship he held until 1953.

In 1909, he composed incidental music for a Cambridge University stage production at Aristophanes' The Wasps, and the next year, he had his first big public successes conducting the premieres of the Fantasia on a Theme of Thomas Tallis (at The Three Choirs Festival in Gloucester Cathedral) and A Sea Symphony (Symphony No. 1), and a greater success with A London Symphony (Symphony No. 2) in 1914, conducted by Geoffrey Toye.

Although at 40, and as an ex-public schoolboy, he could easily have avoided war service or been commissioned as an officer, he enlisted as a private in the Royal Army Medical Corps and had a grueling time as a stretcher bearer before being commissioned in the Royal Garrison Artillery. On one occasion he was too ill to stand but continued to direct his battery lying on the ground. Prolonged exposure to gunfire began a process of loss of hearing which was eventually to cause deafness in old age. In 1918 he was appointed director of music, First Army and this helped him adjust back into musical life.

After the war he adopted for a while a profoundly mystical style in the Pastoral Symphony (Symphony No. 3) and Flos Campi, a work for viola solo, small orchestra, and wordless chorus.

From 1924 a new phase in his music began, characterized by lively cross-rhythms and clashing harmonies. Key works from this period are Toccata marziale, the ballet Old King Cole, the Piano Concerto, the oratorio Sancta Civitas (his favorite of his choral works) and the ballet Job (described as "A Masque for Dancing") which is drawn not from the Bible but from William Blake's Illustrations to the Book of Job. This period in his music culminated in the Symphony No. 4 in F minor, first played by the BBC Symphony Orchestra in 1935. This symphony contrasts dramatically with the frequent "pastoral" orchestral works he composed; indeed, its almost unrelieved tension, drama, and dissonance has startled listeners since it was premiered. Acknowledging that the fourth symphony was different, the composer said, "I don't know if I like it, but it's what I mean."

Two years later Vaughan Williams made a historic recording of the work with the same orchestra for HMV (His Master's Voice), one of his very rare commercial recordings. During this period he lectured in America and England, and conducted the Bach Choir. He was appointed to the Order of Merit in 1935.

His music now entered a mature lyrical phase, as in the Five Tudor Portraits; the "morality" The Pilgrim's Progress; the Serenade to Music (a setting of a scene from act five of The Merchant of Venice, for orchestra and sixteen vocal soloists and composed as a tribute to the conductor Sir Henry Wood); and the Symphony No. 5 in D, which he conducted at the Proms in 1943. As he was now 70, many people considered it a swan song, but he renewed himself again and entered yet another period of exploratory harmony and instrumentation.

Before his death in 1958 he completed four more symphonies, including No. 7 Sinfonia Antartica, based on his 1948 film score for Scott of the Antarctic. He also completed a range of instrumental and choral works, including a tuba concerto, An Oxford Elegy on texts of Matthew Arnold, and the Christmas cantata Hodie. At his death he left an unfinished cello concerto, an opera (Thomas the Rhymer) and music for a Christmas play, The First Nowell, which was completed by his amanuensis Roy Douglas (b. 1907). He also wrote an arrangement of The Old One Hundredth Psalm Tune for the coronation service of Queen Elizabeth II.

Despite his substantial involvement in church music, and the religious subject-matter of many of his works, he was described by his second wife as "an atheist … [who] later drifted into a cheerful agnosticism." It is noteworthy that in his opera The Pilgrim's Progress he changed the name of the hero from Bunyan's Christian to Pilgrim. For many church-goers, his most familiar composition may be the tune Sine Nomine for the hymn "For All the Saints."

During his life he also worked as a tutor for Birkbeck College. [2]

In the 1950s, Vaughan Williams supervised recordings of all but his ninth symphony by Sir Adrian Boult and the London Philharmonic Orchestra for Decca Records. At the end of the sessions for the mysterious sixth symphony, Vaughan Williams gave a short speech, thanking Boult and the orchestra for their performance, "most heartily," and Decca later included this on the LP. He was to supervise the first recording of the ninth symphony with Boult; his death the night before the recording sessions were to begin resulted in Boult announcing to the musicians that their performance would be a memorial to the composer.

Vaughan Williams is a central figure in British music because of his long career as teacher, lecturer and friend to so many younger composers and conductors. His writings on music remain thought-provoking, particularly his oft-repeated call for everyone to make their own music, however simple, as long as it is truly their own.

He was married twice. His first wife, Adeline Fisher, died in 1951 after many years of suffering from crippling arthritis. In 1953 he married the poet Ursula Wood (b. 1911), whom he had known since the late 1930s and with whom he collaborated on a number of vocal works. Ursula later wrote Vaughan Williams' biography RVW: A Biography of Ralph Vaughan Williams, which remains the standard work on his life.

Those wanting to know what Vaughan Williams "is like" in some kind of context (without of course listening to the works straight away themselves) could never do better than to consult the chapter "English Music" in the book "Albion: The Origins of the English Imagination" by Peter Ackroyd. In essence, however, this is characteristically English (and British) music forming part of a certain genre alongside works by the likes of Gustav Holst, Frederick Delius, George Butterworth, William Walton, Percy Aldridge Grainger and others.

If that Englishness in music can be encapsulated in words at all, those words would probably be: ostensibly familiar and commonplace, yet deep and mystical as well as lyrical, melodic, melancholic, and nostalgic yet timeless. Ackroyd quotes Fuller Maitland, who noted that in Vaughan Williams' style "one is never quite sure whether one is listening to something very old or very new."

Vaughan Williams' music expresses a deep regard for and fascination with folk tunes, the variations upon which can convey the listener from the down-to-earth (which Vaughan Williams always tried to remain in his daily life) to that which is ethereal. Simultaneously the music shows patriotism for England in the subtlest form, engendered by a feeling for ancient landscapes and a person's small yet not entirely insignificant place within them.

Like his countrymen Gustav Holst and Percy Aldridge Grainer, Vaughan Williams wrote several important works for military/symphonic band. Band music, being an important musical tradition in England, provided Vaughan-Williams with another creative outlet for his regard for English folk music.